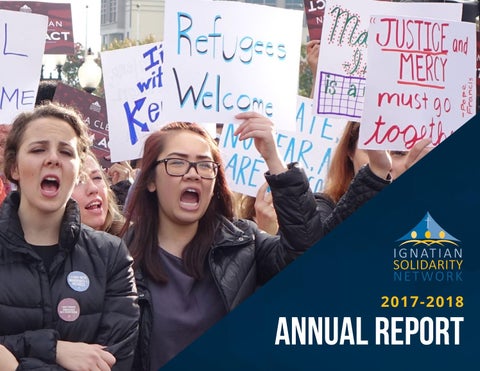 ISN’s network includes more than 90 institutional members from 24 states and Canada, including Jesuit and other Catholic high schools, colleges and universities, parishes, and other partner organizations.

From the Director The Ignatian Solidarity Network’s capacity to network, educate, and form advocates for justice grows each year. This growth is vital at a time when many forces in our society seek to diminish the dignity of those who are most vulnerable. At the root of our work is forming advocates who have a deep respect for the dignity of all people—those who migrate, those affected by the degradation of creation, those who experience marginalization from racial discrimination in our institutions and country. We do this throughout the year in many ways—through digital storytelling, in-person experiences to encounter the issues as lived experiences, programs for emerging justice leaders, and opportunities to directly engage in advocacy with political leaders—uniquely emphasizing a culture of dignity emblematic of our grounding in the spirituality of St. Ignatius of Loyola.

“Hospitality, which is one of the works of mercy, is revealed as a truly human and Christian virtue.” Pope Francis The second year of the Campaign for Hospitality saw great strides in the Ignatian network’s presence as a community of welcome—particularly in the face of increasingly hostile national discourse on immigration issues. Thousands of high school and college students, faculty, and staff, members of Jesuit parishes, and others connected to Jesuit ministries responded as advocates with a commitment to learning, action, and friendship with and for those who are forced to migrate.

For Valentine’s Day in February of 2018, the Ignatian network mobilized to show love to our neighbors. ISN’s Love Your Neighbor Campaign united more than 5,000 individuals in efforts to support, advocate with, and affirm the dignity of those who migrate through a valentine-writing initiative to Congressional members throughout the U.S. and a robust social media campaign. ^ ^ PICTURED: (Top) On Ash Wednesday, members of Holy Trinity Catholic Church, a Jesuit parish in Washington, D.C., delivered “Love Your Neighbor Valentines” to the offices of U.S. senators and representatives who are graduates of Jesuit schools or serve a district or state which contains a Jesuit institution. (Bottom) A Loyola Blakefield student writes a Valentine to his representative.

encounter ISN joined Jesuit Central and Southern province staff and parish members for a border immersion in El Paso. Participants deepened their understanding of border complexities and encountered realities of migration through visits to shelters, legal offices, and a detention facility.

Brophy College Preparatory in Phoenix organized a DACA Teach-In, featuring student stories from four DACA recipients and perspectives from Kino Border Initiative— livestreamed with assistance from ISN to build a culture of understanding throughout the Jesuit network.

During the summer of 2018, the Ignatian network advocated for families separated at the U.S.-Mexico border. 5,841 individuals joined ISN’s legislative advocacy efforts, and Jesuit parish and school groups joined “Families Belong Together” marches across the country.

ignatian family teach-in for justice The 20th annual Ignatian Family Teach-In for Justice built upon a network for justice, equipping the 2,000 attendees to â&#x20AC;&#x153;row into the deepâ&#x20AC;?â&#x20AC;&#x201D;to be challenged and strengthened in order to build a greater, stronger, more enduring love of justice and ability to work for change. Beyond Teach-In speakers, breakout sessions, policy briefings, and networking events, more than 1,400 individuals participated in Advocacy Day on Capitol Hill, advocating for the Dream Act and a racially-just criminal justice system.

(1) Annie Boyd-Ramirez (Marquette University ‘07) and Andrew Lunetta (Le Moyne College ‘12) were recognized in April of 2018 with the Moira O’Donnell Emerging Leaders for Justice Award. The award, named for Moira O’Donnell, an ISN executive director who passed away unexpectedly at age 33, was presented this year by her sister, Aimee O’Donnell.

esta b l i s h i n g ad v ocacy lin k s of m u t u al su pport This year, the Ignatian network robustly answered the call of the Jesuits’ 35th General Congregation to “engage in. . . establishing advocacy links of mutual support between those who hold political power and those who find it difficult to voice their interests.”

The need for advocacy with and for those whose voices are not given power in our nation has never been more critical. ISN coordinated efforts on behalf of the Deferred Action

Participants met with U.S. Senate and House offices, discussing root causes of migration, family separation at the U.S.-Mexico border, and the situation of DACA recipients.

In collaboration with the Jesuit Conference Office of Justice and Ecology, ISN coordinated a sub-region meeting of the Jesuit Migration Network of Central and North America—with representatives from 15 Jesuit and partner institutions.

Ignatian Network institutions signed on to the Catholic Climate Covenant “We Are Still In” campaign, in support of the Paris Climate Agreement

advocated against the deportation of two members of the Jesuit network

ISN has effectively conceptualized advocacy in a very tangible way for me. It has shaped, and will continue to shape, my trajectory as an agent of change in through an Ignatian lens, and for that I am truly grateful. pedro guerrero loyola university chicago ‘14

parish justice summit Parishioners, staff, and clergy from 15 Jesuit parishes across the U.S., joined by representatives from JustFaith, the Jesuit Conference Office of Justice and Ecology, and Jesuits West, gathered at Regis University in Denver for ISN’s Jesuit Parish Justice Summit. The Summit provided opportunities for idea sharing and networking

around parish work for social justice—with a focus on immigration, care for creation, and racial justice. The Summit marked the kickoff of ISN’s Jesuit Parish Collaboration Framework—promoting a stronger Jesuit parish network leading to coordinated discernment and action on justice issues.

A tool for prayer, reflection, and action in the I gnatian tradition, responding to Pope Francis’ call in L audat o Si’ to care for creation and to reconcile our relationship with God, creation, and one another.

In Laudato Si’ Pope Francis asked us reconcile our relati to onship with God, care for creation and to creation and one Borrowing from the great Ignati another. an tradit Ecological Exam en asks you to reflec ion of examens, this with creation, to t acknowledge and on your personal relationship amend your ways ecological justice and to by standing in solida by environmental rity with those most promote harm. impacted Begin the Exam en by placing yours elf or your group allows you to be in open to the ways the Spirit is worki a posture that are six steps in the Examen: ng in you. There I give than ks to God for creation and wonderfully for being made. (Where did I feel God’s presence in creation today ?) I ask for the grace to see in all its sple creation as God does – ndor and suff ering. (Do I see the beaut y of creation and and the poor?) hear the cries of the earth EcoExamen

I ask for the grace to look my life choi closely to see ces impact how creation and vulnerable. the poor and (What challenges or joys do I exper ience as I recall creation? How can my care I turn away from instead stand in a throwaway cultur for solidarity with creati e and on and the poor? ) I ask for the grac ecological justi e of conversion tow ards ce and reco nciliation. (Where have I fallen short in caring for and sisters? How do I ask for a conve creation and my brothers rsion of heart?) I ask for the grac with God, crea e to reconcile my rela tionship tion and hum solidarity thro anity, and to stand in ugh my actio ns. (How can I repair my relationship with creation and consistent with my desire for recon make choices ciliation with creati on?) I offer a closi ng prayer for vulnerable the earth and in our socie the ty.

The ecological examen supports reflection in print and online.

38 students. 14 Jesuit colleges and universities. A shared capacity for compassion. For four days at the 2017 Ignatian Justice Summit, Jesuit college and university students gathered from throughout the U.S. to connect, educate, and network for immigration justice.

immersion coordinators summit Twenty-seven staff from twenty Ignatian network colleges and universities gathered in Chicago to share best practices and network to develop ethical and holistic immersion program experiences. â&#x20AC;&#x153;This gathering always provides a unique and crucial space for collegiality, collaboration, and learning. Ongoing formation and spaces like these are essential and we seek to ensure that our programs are responsible, responsive, ethical, and engaging.â&#x20AC;?

Yo u r Impact Makes a Dif f erenc e.

ISN feels like my moral compass. It has kept me accountable as I work to integrate justice into my life beyond my volunteer experience. It has been integral to my re-entry into the U.S. after two years in Belize. I believe in ISN’s mission and the future the network seeks. I give because I know that an organization can have the best mission in the world, but if they don’t have the funds to do the work the mission cannot be achieved.

Pictured: ISN Board of Directors and staff visited Homeboy Industries in Los Angeles.

ISN has been part of my life for 10 years, from taking students to the Teach-In in Georgia, to board service and beyond. I’m committed to ISN as an educator and a Catholic. I believe it is one of the best ways we can introduce young people to social justice as an important part of their faith lives. I give so ISN can continue to develop young leaders for the church and society.

The Ignatian Solidarity Network (ISN) is a national organization that networks, educates, and forms advocates for social justice animated by the spirituality of St. Ignatius of Loyola and the witness of the Jesuit martyrs of El Salvador and their companions. Learn more: ignatiansolidarity.net