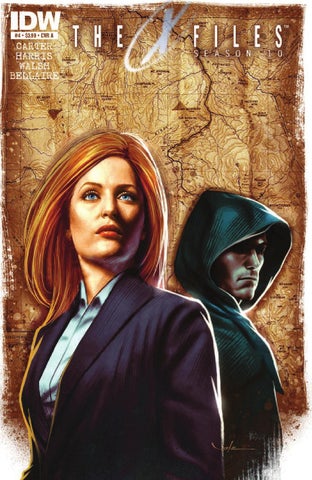 Previously on The X-Files... For years, FBI agents Fox Mulder and Dana Scully toiled in the X-Files Unit, a one-office division of the Bureau dealing with cases deemed unsolvable and related to unexplained phenomena. Eventually, both agents left the FBI and began a new life together in peaceful anonymity. But their past recently caught up with them as a mysterious group targeting anyone associated with the X-Files has abducted Scully, forcing Mulder to seek help from some old friends. But an enemy from Mulder’s past has also surfaced, offering unwanted help...

COVER A art by Carlos Valenzuela

The X-Files created by Chris Carter

THE X-FILES: SEASON 10 #4. SEPTEMBER 2013. FIRST PRINTING. THE X-FILES ™ & © 2013 TWENTIETH CENTURY FOX FILM CORPORATION. ALL RIGHTS RESERVED. IDW Publishing, a division of Idea and Design Works, LLC. Editorial offices: 5080 Santa Fe Street, San Diego, CA 92109. The IDW logo is registered in the U.S. Patent and Trademark Office. Any similarities to persons living or dead are purely coincidental. With the exception of artwork used for review purposes, none of the contents of this publication may be reprinted without the permission of Idea and Design Works, LLC. Printed in Korea. IDW Publishing does not read or accept unsolicited submissions of ideas, stories, or artwork. 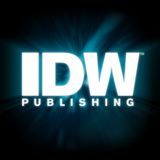