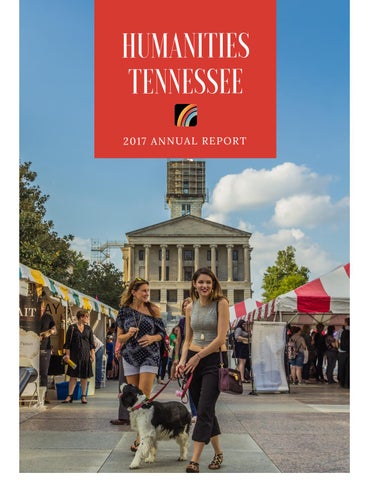 DIRECTOR&#39;S NOTE At Humanities TN, our work is driven by our mission to help strengthen our state’s communities by exploring such deep questions with openness and thoughtfulness, always within the larger contexts of history and tradition. We invite you to look with us over our work in the past year and to think about how stronger, more deliberate communities can yield stronger, more involved individuals. Throughout 2017, we worked to engage new community partners, audiences, and participants for our programs and to articulate new questions that matter to Tennesseans — with special focus on connecting community members to each other and to the environment surrounding them. In Nashville, we wrapped a months-long pilot of a partner program, the Neighborhood Story Project, and we worked to develop that pilot into a replicable model for participants to investigate and understand their community history. Meanwhile, across the state, along the banks of Tennessee’s spectacular rivers, we worked with six state parks to present the Smithsonian traveling exhibit Water/Ways, encouraging visitors to consider the complex and vital relationships we have with water. Finally, at the 29th Annual Southern Festival of Books, we welcomed a new partner — the Watkins College of Art &amp; Design — and were excited and encouraged by the new audiences and new aesthetic they brought to the event. Our plans to continue and expand this work are underway, and over the next year, we will pursue opportunities to take this work into even more parts of the state, focusing on building partnerships in communities where we have not had a presence. In all of this work, Humanities TN depends on the participation of our great network of supporters. Thank you for all you do to make these programs work!

ABOUT US MISSION To foster community and civility in Tennessee through public programs that examine and reflect upon ideas, stories, history, arts, and culture. WHAT WE DO Founded in 1973, HT is a nonprofit organization that conducts and supports public humanities programming across the state. We focus on local history, literary arts, and civic life, and our work sparks conversations and builds stronger communities across Tennessee.

Through our grants, awards, scholarships, and partner programs, we gave away $166,860 in 2017. The recipient organizations leveraged that support to raise more than $475,000 for public humanities programs throughout the state.

We gave away 2,639 books to students around the state through our Student Reader Day program, reviewed more than 250 books on Chapter16.org, and hosted more than 230 authors and 150 book vendors at the 29th annual Southern Festival of Books.

Through our programs, grants, and media partnerships, we provided approximately 500,000 Tennesseans with free humanities content, resources, and programming.

Engaging in the stories

of the present and the

past to build a better

We once again partnered with the Robert Penn Warren Center for the Humanities at Vanderbilt for a special track called, &quot;Telling Our Stories: Media, Methods, and Meaning.&quot; We also partnered with Watkins College of Art &amp; Design to bring the Handmade &amp; Bound Festival to the Plaza for the first time. Food trucks, children&#39;s activities, and three performance and music stages rounded out the festivities over the course of the weekend. We are incredibly grateful to sponsors, donors, partners, and hundreds of volunteers who make the Southern Festival of Books possible each year. It simply would not be possible without their dedication and hard work. Mark your calendars for the 30th annual Festival, October 12-14, 2018!

AUTHORS IN THE ROUND

As has become tradition, we held a

We were pleased to welcome back

party in the summer to release the

the 10th annual Authors in the

October 14 for a raucous event at

for the Festival. Our friends at

Round dinner. This vital fundraiser

The Rymer Gallery in downtown

helps keep the Festival free for

their space for the occasion. The

everyone. We thank co-chairs

Mixon for superb leadership that

resulted in a beautiful evening.

Ciona Rouse against one another,

drinks, conversation, and of

With a guest author at each table,

with their readings judged by local

each year to come.

A traveling Smithsonian exhibit exploring our relationship to water We were thrilled to partner with Tennessee State Parks to present Water/Ways, a Museum on Main Street (MoMS) exhibit tour that explores water as an essential component of life on our planet — environmentally, culturally, and historically. The exhibit toured six state parks over the course of nearly a year in Tennessee: Warriors Path State Park (Kingsport) Hiwassee/Ocoee State Park (Delano) Pickwick Landing State Park (Pickwick Dam) Johnsonville State Historic Park (New Johnsonville) Reelfoot Lake State Park (Tiptonville) Meeman-Shelby State Park (Millington) In addition to the exhibit, each host park offered a variety of public programs, including discussions, debates, and children’s activities that explored waterrelated local history and current events. Host parks could access up to $2,500 each in support of public programs. Those funds were generously provided by BlueCross BlueShield TN Health Foundation. MoMS is a Smithsonian outreach program that partners with state humanities councils to engage small town audiences and bring revitalized attention to underserved rural communities. The next MoMS exhibit that Humanities TN will administer in our state will be Crossroads: Change in Rural America — look for it in 2019!

A community of Tennessee writers, readers, and passersby Humanities TN founded Chapter16.org in 2009 in response to the loss of book coverage in newspapers around the state. It is now the only publication that provides comprehensive coverage of Tennessee&#39;s literary news and events. The site posts new reviews, interviews, poems, and excerpts each weekday and provides the content free of charge to newspapers. A sampling of Tennessee writers that Chapter 16 highlighted in 2017: The Midnight Cool by Nashville novelist Lydia Peelle Perfect Little World by Sewanee novelist Kevin Wilson Arthur and Sherlock by Crossville native Michael Sims Eveningland by Knoxville novelist Michael Knight City of Light, City of Poison by Nashville nonfiction writer Holly Tucker Signals by Chattanooga short-story writer Tim Gautreaux The Songs of Trees by Sewanee nonfiction writer David George Haskell Living in the Weather of the World by former Memphis novelist Richard Bausch Dimestore by former Nashville novelist Lee Smith The Book of Separation by Memphis native Tova Mirvis Good Booty by Nashville nonfiction writer Ann Powers

Humanities TN annually contributes staff time and/or funding to organizations doing public humanities programs around the state. The following are partner programs in which we invested in 2017.

March to the 19th

STATEWIDE. March to the 19th is a statewide initiative to uncover and preserve women’s history in our state as we near the 100th anniversary of the passage of the 19th amendment. Building on a series of statewide women&#39;s history boot camps for local history providers, March to the 19th hosted a series of digitization events in an effort to archive family and local history items related to African American women’s political activity in Tennessee. These workshops yielded a new archive of dozens of items, including interviews with several African American women in their mid-nineties, that will now be accessible as a vital chapter in Tennessee’s rich history.

NASHVILLE. Nashville Reads is a community-wide reading program that takes place in the spring of each year. The 2017 book was March: Volume One by Congressman John Lewis and Andrew Aydin and illustrated by Nate Powell. Events took place throughout Nashville including lectures, public conversations, contests, and film showings. The Nashville Reads committee distributed 500 books at locations throughout the community. The kick-off event was a public lecture with John Lewis at MLK High School in November 2016, and the culminating event was a free showing of a new documentary about Lewis, Get In the Way, at the Nashville Public Library on May 2, 2017.

NASHVILLE/STATEWIDE. The Neighborhood Story Project began as a pilot occurring in three Nashville neighborhoods. Working together over 12 weeks, residents gathered photographs, historical information, stories, and perspectives from people connected to the neighborhood and then shared their findings with the public. Phase two involved evaluating the pilot projects and creating a toolkit for replicating the program around the state. Sites in Jefferson City, Lewisburg, Martin, Memphis, and Pulaski will undertake the project in 2018.

NASHVILLE. This program offers 6 weeks of literacy and civics education for K-4th graders. The 2017 program offered activities, guest readers, projects, and field trips surrounding the theme &quot;My Family, My Community, My World.&quot; The students produced a fabulous newspaper including articles they wrote, photographs they took, and interviews they conducted.

STATEWIDE. More than 7,600 students participated in the 2017 statewide competition, with 282 making it to state finals, and 69 moving on to National History Day. We awarded Best Project in TN History medals to A.J. Camacho (senior division) from Maryville for his project, &quot;Clarence Darrow: Taking a Stand for Truth,&quot; and to Eden Carnes (junior division) from Friendsville for her project, &quot;Dolly Parton: Taking a Stanza in History.&quot;

CHATTANOOGA &amp; CLEVELAND. This program brings books and literature into the Bradley Co. and Hamilton Co. jails for inspiring reading sessions and discussions. Turn the Page began with one reading group of 8 participants, and has swelled to multiple groups with 75 participants overall. Courses focus on different genres including classic literature, young adult dystopias, and journaling. In addition, the program offers resources for residents of the jail for their reentry to society.

MEMPHIS. Southern Word conducted spoken word poet residencies at five West TN schools that led up to a semifinal slam and the State of the Word showcase in December.

Humanities TN awarded 13 grants to cultural, educational and community-based organizations in support of public humanities programs in 2017. Each of these funded groups matched their grants from HT through significant local investment of both in-kind and cash contributions totaling over $175,441. The projects supported below were critical to our mission of increasing access to life-long learning opportunities, promoting active citizenship, and fostering a sense of self and community.

HARROGATE &quot;Of the People, By the People, For the People&quot; Abraham Lincoln Library &amp; Museum $2,500

NASHVILLE An Archaeologist&#39;s Eye: The Parthenon Drawings of Katherine A. Schwab Exhibit Conservancy for the Parthenon and Centennial Park $11,260

In addition to annual grants, Humanities TN gives out awards/professional development grants to educators and scholarships to museum volunteers.

These professional development awards are available each year for up to six full-time, 3rd-12th grade Tennessee teachers or librarians. Each winner receives $2,000 and their school receives $1,500 for the purchase of humanities materials or for student humanities projects. Since 1985, Humanities Tennessee has awarded hundreds of thousands of dollars to Tennessee teachers and schools. DICKSON Charles Elston General Music Dickson Middle School NASHVILLE Connie Lopez-Fink 5th Grade Social Studies University School of Nashville

THANK YOU to the following individuals and organizations who made our work possible in 2017. GIFTS OF $20,000 OR MORE

The Patrons&#39; Circle includes individuals who give $500 or more to HT annually. We invite you to contact us about joining this circle and learning more about how your gifts keep the humanities thriving in our state. Our warm thanks to our 2017 Patrons&#39; Circle members for their generous support!

On June 22, 2017, Parnassus Books hosted a fundraising event featuring John Grisham, in conversation with Ann Patchett and Jon Meacham. The event was a sell-out and raised more than $13,000, with all proceeds benefiting Humanities TN! Thank you to our friends at Parnassus for hosting this wonderful event and to John Grisham, Ann Patchett, and Jon Meacham for participating. It was an unforgettable evening!

THANK YOU TO ALL OF OUR GENEROUS DONORS! To make a donation, please visit HumTN.org/Support. Supporters listed here made gifts between January 1 and December 31, 2017. If we have not reported your gift correctly, please contact us.

Read about our 2017 programs, grants, events, and financials.