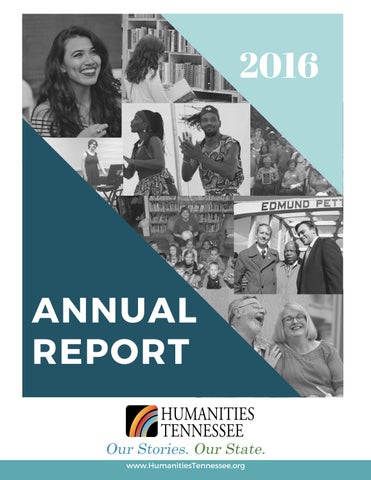 A Word from the Director As we review this past year, Humanities Tennessee is both encouraged and challenged to look to our immediate future. 2016 was a fruitful year, full of change for our organization — a year of realizing many goals and setting new ones for the coming five years. In our new Strategic Plan, we renew our commitment to the longstanding mission of strengthening Tennessee’s communities by providing accessible public programs that use the humanities. Now we continue the challenge of ensuring that these programs meet the needs of Tennesseans statewide. In the current political climate, we recognize that social divisions are crystallizing and that people continue to self-segregate into like-minded communities. While the reasons for increased social separation may be obvious, the results are often hidden until rhetoric reaches heated levels.

We believe that our programs can make a real difference: when people think critically about their own beliefs and opinions, practice deeper, more empathetic understanding of contrary opinions, and place great value in the study of our shared histories, we can all engage in a more productive and constructive public discourse and begin to see each other differently and with increased civility. This is the crux of our work at Humanities Tennessee; it has been for decades. We hope you will see the results of that work in this review of 2016, and we look forward to continuing it with you in the years ahead.

About Us Our Mission Humanities Tennessee nurtures the mutual respect and understanding essential to community by enabling Tennesseans to examine and critically reflect upon the narratives, traditions, beliefs, and ideas — as expressed through the arts and letters — that define us as individuals and participants in community life.

Our History Founded in 1973 as a state affiliate of the National Endowment for the Humanities, HT is an independent, 501(c)(3) nonprofit organization dedicated to developing a sense of community through statewide programs and grants in literature, history, and culture.

Our Team 2016 Board of Directors

2016 Highlights Thanks to our dedicated donors, sponsors, volunteers, and friends, Humanities Tennessee accomplished the following in 2016:

Gave away more than 2,285 books and sponsored more than 550 humanitiesrelated events and activities across the state.

Convened Tennesseans of all walks of life to discuss difficult topics — such as immigration, prison reform, religion, veterans&#39; issues, and more — in a civil manner, helping to strengthen communities.

Reached nearly 500,000 Tennesseans through programs and grants and with the help of media partnerships.

The Southern Festival of Books A Celebration of the Written Word

Authors in the Round The 9th annual Authors in the Round (AIR) dinner, a fundraising event for Humanities TN and the Southern Festival of Books, was held Friday, October 14, at War Memorial Auditorium in Nashville. Co-chairs Dianne Neal and Paul Ney hosted a wonderful evening of dinner, drinks, and conversation. Local author Andrew Maraniss emceed the evening. Artwork was provided by Knoxville-based artist Daniel Lai. Founding and Honorary chairs Todd Bottorff and Jean Bottorff were in attendance, along with 43 authors and more than 350 guests.

Letters About Literature is a writing contest that encourages students in grades 4-12 to write a personal letter to the author, living or dead, of a fiction or nonfiction book, short story, poem, essay, or speech about which they have strong feelings. State winners receive a cash award and a certificate from Humanities TN. The 1st place winners receive a $100 prize and advance to the national competition. More than 985 students from across the state entered the contest in 2016. State winners hailed from Ooltewah, Knoxville, Memphis, and Germantown.

&quot;What an amazing experience this event was for our readers. Things like this just don&#39;t The Student Reader Day program brings together writers and happen for our students. The young readers with the goal of offering great literature, critical majority of them live in thinking, and discussion opportunities in classrooms across the extreme poverty. This definitely state. We match authors with schools, free of charge, for unique could not have happened presentations to underscore the importance of literacy/ literature in without the help of Humanities young people&#39;s lives. Participating 2016 authors included Frye Gaillard, Randi Pink, Ruta Sepeys, and Courtney Stevens. In total, TN. Our school has been we distributed 2,286 books to 2,224 students at 8 schools. struggling with literacy for quite some time, and I think Support for the Student Reader Day program is generously provided events like this one will help by Dollar General Literacy Foundation, the Nashville Predators tremendously.&quot; Foundation, and the Community Foundation of Middle Tennessee.

The Conversation Project is a small-group program that allows community members to come together and discuss difficult topics such as race, inequality, poverty, citizenship, religion, war, and more. We recently expanded the program thanks to generous support from the NISSAN Foundation. Conversations in 2016 included &quot;Routes to Roots: Migration Stories,&quot; facilitated by Antonio Vasquez of MTSU and held in Nashville, Charlotte, and Dickson; a series called &quot;Neighbor2Neighbor: Muslims in Community Life&quot; held in partnership with the Faith &amp; Culture Center, The Muslim Women&#39;s Council, and the Nashville International Center for Empowerment; and &quot;The School-to-Prison Pipeline,&quot; exploring the disparities of class and race in approaches to juvenile justice, administered at Stratford and Maplewood High Schools&#39; &quot;Top Floor&quot; summer program.

Outstanding Educator Awards are available each year for up to six full-time, 3rd-12th grade Tennessee teachers and/or librarians. Each award winner receives a $2,000 grant to further their professional development in the humanities. The recipient&#39;s school also receives a $1,500 grant to purchase humanities instructional materials or for student humanities programs.

This statewide, multiphase initiative will rebuild women’s history in Tennessee over the next five years, commemorate the centennial of the 19th Amendment, and give voice to the women in America’s history. Projects include women&#39;s history bootcamps, digitization days, and more.

&quot;Our Muslim Neighbor&quot; Conference (Faith &amp; Culture Center) The theme for 2016 conference was “The Power of Rhetoric and Imagery,&quot; and the aim was to convene a group of practitioners, experts, and interested community members to build and extend a constructive conversation on the issue of media portrayals of Muslims on the national and local level.

&quot;Memories of a Massacre: Memphis in 1866&quot; (U of Memphis) Through a series of lectures, book discussions, exhibits, and other events, this project commemorated the 150th anniversary of the Memphis Massacre and explored the impact of those violent events on federal policies and constitutional law in the Reconstruction Era.

Since 2003, Humanities TN has offered scholarships for the annual Tennessee Association of Museums (TAM) conference, held each March. The scholarships are available to volunteers who work for nonprofit museums that have no paid professional staff. Scholarships cover conference registration fees and two nights&#39; lodging for two people from up to 15 organizations. Since the start of the program, we have awarded scholarships to 264 individuals from 107 orgs.

Cooperative Agreements Humanities Tennessee provides annual support to the following ongoing programs: Tennessee History Day (Tennessee Historical Society, Statewide) This project supports students at the state level of the national competition. More than 7,100 students participated in the 2016 statewide competition, with 251 making it to the state finals and 65 moving on to National History Day. Humanities TN gave out special awards for Best Projects in TN history to students from Knoxville and Maryville.

The 12th annual Children&#39;s Festival of Reading, held on May 21 in World&#39;s Fair Park, kicked off a summer of reading with a full day of music, storytelling, arts, crafts, science exploration, food, and fun. Characters in attendance included Ladybug Girl, Paperboy, and Dragonbreath.

Partnership for Public Humanities The Partnership for Public Humanities (PPH) provides financial support to nonprofit partners for public humanities projects. It is designed to encourage nonprofits to use the humanities to strengthen work in their communities—whether by sharing local history, cultivating participation in the arts, or developing the workforce. As of 2016, the PPH includes 30 partner organizations in 30 cities/towns, representing 27 counties across Tennessee.

2016 Contributors Thank you to the following individuals and organizations who made our work possible in 2016.

Patrons&#39; Circle Humanities Tennessee&#39;s Patrons&#39; Circle includes supporters who give $500 or more annually. We invite you to contact us about joining this circle and learning more about how your gifts will help keep the humanities thriving in our state. Our warm thanks to our 2016 Patrons&#39; Circle members for their generous support! Lynn A. Alexander Stephanie K. Alexander Jean and Dennis C. Bottorff Melinda and John Buntin Nathan Andrew Buttrey Patsy Q. Carson Barbie Chadwick

THANK YOU to all of our 2016 supporters. For information on becoming a Friend of Humanities TN, please visit HumTN.org or contact Alexis Stevens at (615) 770-0006 ext. 8014 or at alexis [at] humanitiestennessee.org. Contributors listed here made gifts between January 1 and December 31, 2016. If we have not reported your gift correctly, please contact us.