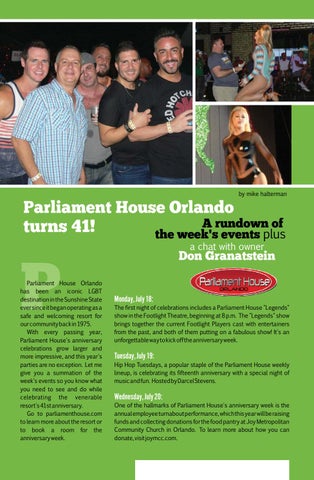 Parliament House Orlando A rundown of turns 41! the week&#39;s events plus a chat with owner

Parliament House Orlando has been an iconic LGBT destination in the Sunshine State ever since it began operating as a safe and welcoming resort for ourcommunitybackin1975. With every passing year, Parliament House&#39;s anniversary celebrations grow larger and more impressive, and this year&#39;s parties are no exception. Let me give you a summation of the week&#39;s events so you know what you need to see and do while celebrating the venerable resort&#39;s41stanniversary. Go to parliamenthouse.com to learn more about the resort or to book a room for the anniversaryweek.

Tuesday, July 19: Hip Hop Tuesdays, a popular staple of the Parliament House weekly lineup, is celebrating its fifteenth anniversary with a special night of musicandfun. HostedbyDarcelStevens.

Wednesday, July 20: One of the hallmarks of Parliament House&#39;s anniversary week is the annualemployeeturnaboutperformance,whichthisyearwillberaising funds and collecting donations for the food pantry at Joy Metropolitan Community Church in Orlando. To learn more about how you can donate,visitjoymcc.com.