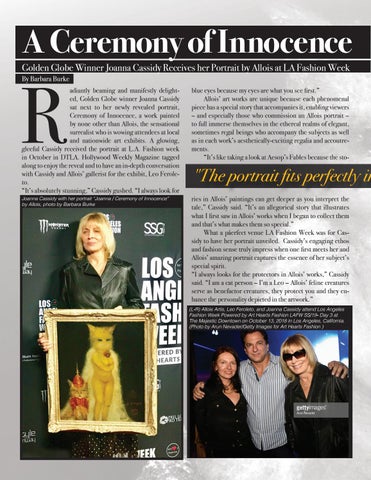 adiantly beaming and manifestly delighted, Golden Globe winner Joanna Cassidy sat next to her newly revealed portrait, Ceremony of Innocence, a work painted by none other than Allois, the sensational surrealist who is wowing attendees at local and nationwide art exhibits. A glowing, gleeful Cassidy received the portrait at L.A. Fashion week in October in DTLA. Hollywood Weekly Magazine tagged along to enjoy the reveal and to have an in-depth conversation with Cassidy and Allois’ gallerist for the exhibit, Leo Feroleto. “It’s absolutely stunning,” Cassidy gushed. “I always look for Joanna Cassidy with her portrait “Joanna / Ceremony of Innocence” by Allois, photo by Barbara Burke

blue eyes because my eyes are what you see ﬁrst.” Allois’ art works are unique because each phenomenal piece has a special story that accompanies it, enabling viewers – and especially those who commission an Allois portrait – to full immerse themselves in the ethereal realms of elegant, sometimes regal beings who accompany the subjects as well as in each work’s aesthetically-exciting regalia and accoutrements. “It’s like taking a look at Aesop’s Fables because the sto-

ries in Allois’ paintings can get deeper as you interpret the tale,” Cassidy said. “It’s an allegorical story that illustrates what I ﬁrst saw in Allois’ works when I began to collect them and that’s what makes them so special.” What a påerfect venue LA Fashion Week was for Cassidy to have her portrait unveiled. Cassidy’s engaging ethos and fashion sense truly impress when one ﬁrst meets her and Allois’ amazing portrait captures the essence of her subject’s special spirit. “I always looks for the protectors in Allois’ works,” Cassidy said. “I am a cat person – I’m a Leo – Allois’ feline creatures serve as benefactor creatures, they protect you and they enhance the personality depicted in the artwork.” (L-R) Allois Artis, Leo Feroleto, and Joanna Cassidy attend Los Angeles Fashion Week Powered by Art Hearts Fashion LAFW SS/19- Day 3 at The Majestic Downtown on October 13, 2018 in Los Angeles, California. (Photo by Arun Nevader/Getty Images for Art Hearts Fashion )

Our December/ January edition features founder and producer of Miss Russian Los Angeles Beauty and Talent Show, Lika Osipova. This remarkable Model and Business owner received a "Role Model of the Year" Award from the City of West Hollywood for her effiorts to harmoniously bring together different cultures in Los A Angeles