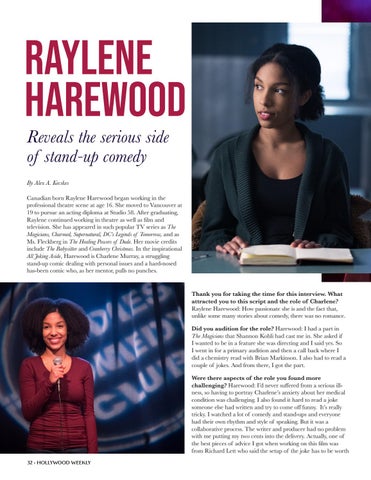 RAYLENE HAREWOOD Reveals the serious side of stand-up comedy By Alex A. Kecskes Canadian born Raylene Harewood began working in the professional theatre scene at age 16. She moved to Vancouver at 19 to pursue an acting diploma at Studio 58. After graduating, Raylene continued working in theatre as well as film and television. She has appeared in such popular TV series as The Magicians, Charmed, Supernatural, DC’s Legends of Tomorrow, and as Ms. Fleckberg in The Healing Powers of Dude. Her movie credits include The Babysitter and Cranberry Christmas. In the inspirational All Joking Aside, Harewood is Charlene Murray, a struggling stand-up comic dealing with personal issues and a hard-nosed has-been comic who, as her mentor, pulls no punches. Thank you for taking the time for this interview. What attracted you to this script and the role of Charlene? Raylene Harewood: How passionate she is and the fact that, unlike some many stories about comedy, there was no romance. Did you audition for the role? Harewood: I had a part in The Magicians that Shannon Kohli had cast me in. She asked if I wanted to be in a feature she was directing and I said yes. So I went in for a primary audition and then a call back where I did a chemistry read with Brian Markinson. I also had to read a couple of jokes. And from there, I got the part. Were there aspects of the role you found more challenging? Harewood: I’d never suffered from a serious illness, so having to portray Charlene’s anxiety about her medical condition was challenging. I also found it hard to read a joke someone else had written and try to come off funny. It’s really tricky. I watched a lot of comedy and stand-ups and everyone had their own rhythm and style of speaking. But it was a collaborative process. The writer and producer had no problem with me putting my two cents into the delivery. Actually, one of the best pieces of advice I got when working on this film was from Richard Lett who said the setup of the joke has to be worth 32 • HOLLYWOOD WEEKLY