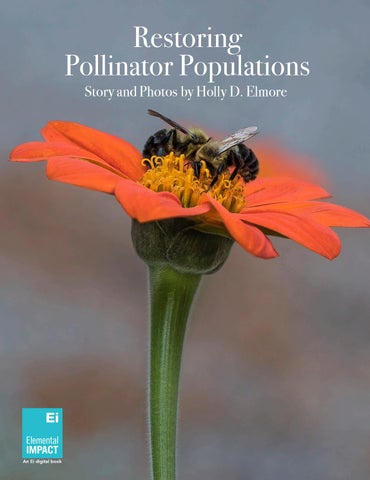 Â© Rowan Jacobsen, from The Essential Oyster, published by Bloomsbury.

If the bee disappeared off the surface of the globe, then man would have only four years of life left. No more bees, no more pollination, no more plants, no more animals, no more man. &gt; Albert Einstein

Above: A carpenter bee Photo by David Malosh from The Essential Oyster by Rowan Jacobsen

Pollinators, such as bees, birds, bats, and other insects, play a crucial role in flowering plant reproduction and in the production of most fruits and vegetables.

The recent honeybee colony collapse disorder and plight of the monarch butterfly populations showcased the important role insects play in pollinating the Earth’s food supply. “Pollinators are responsible for nearly one in three bites of food” emerged as a common media phrase to explain the ramifications of pollinator population loss. Activated as a response to the honeybee and butterfly population loss, the pollinator garden movement is filled with many added-value benefits. Pollinator gardens are gardens of any size containing flowering plants designed to attract and feed pollinators as well as provide homes for the next generation. When pollinator gardens accompany community gardens, they can contribute to robust crops for local consumption. The gardens are excellent vehicles for community engagement and provide benefits beyond food, whether for the pollinators or the gardener. In addition to honeybees and butterflies, pollinators include over 4,000 bee species native to North America, beetles, flies, moths, wasps, and occasionally small mammals. According to the Xerces Society, there are three ground rules for healthy pollinator gardens: 1. provide a range of native flowers, 2. create nest sites, and 3. avoid using pesticides. Diversity is essential to an effective pollinator garden. In the Times Magazine April 2015 article “You Asked: Are the Honeybees Still Disappearing?” Dr. Heather Mattila, a honeybee biologist at Wellesley College, explains: “Bees need a varied diet of different pollens in order to grow into strong, healthy workers. A green space can be a green desert if it doesn’t have flowering plants that are beefriendly.”

Many pollinators are attracted to a single plant species (e.g. monarch butterflies) or are limited by their mouth structure to a certain size/ shape of a flower. Clusters (or drifts) of flower types within the garden make it easier for insects to pollinate the plants. It is important to plant flowers local insects evolved to pollinate; thus, native species are best for the gardens. Tidy gardens are wasteful gardens! A common landscape practice is to remove plants once they enter the dormant stage. Yet dormant plants are filled with seasonal food for birds, insects, and other small creatures. When opened, remaining plant pods reveal abundant seeds and often fluffy material perfect for nest building. Additionally, fallen leaves, twigs, and branches provide homes for insect pupal cases and safe havens for nests. By nature’s design, leaves contain necessary nutrition for the host plant when the leaves decay. Pesticide use, including organic varieties, causes unintended harm to a garden’s integrated ecosystem. Alternative pest control practices include attracting native predatory insects, such as green lacewing larvae, which are voracious consumers of aphids and other pesky critters. Eliminating the use of man-made fertilizers also removes chemical influence which can damage plants. When synthetic fertilizers are applied, plants grow faster than their natural rhythm. Faster growth results in plants with thinner cell membranes that are vulnerable to predation by insects, parasites, and fungus. Healthy, robust plants with thick stalk and leaf cell membranes are not as enticing for pests.

Tidy gardens are wasteful gardens! A common landscape practice is to remove plants once they enter the dormant stage. Yet dormant plants are filled with seasonal food for birds, insects, and other small creatures.

Many common flowering plants loved by local pollinators are considered weeds and eradicated from gardens and lawns. Classification of the milkweed as a noxious weed was a strong contributor to the demise of the monarch butterfly population. The Weed or NOT sidebar includes details on the monarch butterfly and native milkweed’s symbiotic relationship. It is common for local governments, nonprofits, foundations, and citizen groups to partner for formal pollinator garden programs. Park Pride&#39;s Pollinators in Parks program is a prime example of the community coming together to create pollinator gardens in City of Atlanta Parks. Park Pride in partnership with the Atlanta Botanical Garden received a $60,000 grant from the Home Depot Foundation for a pollinator garden pilot initiative. The Pollinators in Parks project goal was to increase the presence and impact of pollinators in urban landscapes by installing gardens in Atlanta&#39;s public parks. Requirements for pilot participation included an adjacent community garden along with an established park group designated to plan, develop, and maintain the pollinator garden. For the first year, Park Pride landscape architects and Atlanta Botanical Gardens pollinator experts worked closely with the park group on the garden design, building, and planting. According to Park Pride Visioning Coordinator Teri Nye, “Starting with a planting plan and a ‘menu’ of host and nectar plants ensures that each garden has a seasonal succession of food for our native pollinators

during all stages of their lifecycles.” Ms. Nye’s comment emphasizes the important role gardens play throughout the four seasons. The Captain Planet Foundation™ Project Learning Garden provides schools with outdoor learning laboratories and is another example of how gardens empower communities. Gardens in the schoolyard are effective outdoor learning spaces for students to engage in inquiry-driven, project-based learning across all disciplines. Pollinator gardens accompany each Project Learning Garden. The Captain Planet Foundation™ developed four ecoSTEM Resource Kits, a perfect tool for educators getting started with projectbased learning. The Pollination ecoSTEM Kit includes a classroom set of milkweed seeds for students to take home. When students plant milkweed seeds at home, they create a monarch butterfly corridor or “way station.” A common thread between Pollinators in Parks and Project Learning Garden is the support and education provided during garden planning, building, and planting. Yet the programs require the park group or school to eventually accept full-garden responsibility. Thus, the programs empower for long-term success. Restoring pollinator populations requires aligning with Nature’s systems within the urban, rural, and agriculture environments. Well designed pollinator gardens filled with an array of native flowering plants provide way stations for migrating pollinators and homes for locally based insects. And pollinator gardens are beautiful! h

â&amp;#x20AC;&amp;#x153;The men of experiment are like the ant; they only collect and use. But the bee...gathers its materials from the flowers of the garden and of the field, but transforms and digests it by a power of its own.â&amp;#x20AC;?

â&amp;#x20AC;&amp;#x153;There is one masterpiece, the hexagonal cell, that touches perfection. No living creature, not even man, has achieved, in the centre of his sphere, what the bee has achieved in her own: and were some one from another world to descend and ask of the earth the most perfect creation of the logic of life, we should needs have to offer the humble comb of honey.â&amp;#x20AC;?

â&amp;#x20AC;&amp;#x153;Unfurling, unfolding, undulating. Sounds all around that implode and explode deep in the ground. The earth is expanding pushing up grasping the sun. What is a garden but what man has done.â&amp;#x20AC;? ~ Ryan Gainey

Weed or NOT Enacted in 1975, the Noxious Weed Act established a Federal program to control the spread of noxious weeds. According to the Digest of Federal Resource Laws of Interest to the U.S. Fish and Wildlife Service: The Secretary of Agriculture was given the authority to designate plants as noxious weeds by regulation, and the movement of all such weeds in interstate or foreign commerce was prohibited except under permit. The Secretary was also given authority to inspect, seize, and destroy products, and to quarantine areas if necessary to prevent the spread of such weeds. He was also authorized to cooperate with other Federal, State, and local agencies, farmers associations, and private individuals in measures to control, eradicate, or prevent or retard the spread of such weeds. By 2001, the common milkweed was classified as a noxious weed in 35 states. In My Altona Forest’s April 2014 post, “Monarchs and Milkweed: The Precarious Cycle,” the comment sums up the problem: “There is a symbiotic relationship between the native milkweed plants and the monarch. The monarch butterflies enjoy the nectar from the flowers and help pollinate the plants. The successful pollination allows the milkweed to thrive and thus provide more nurseries for the crucial ‘fourth generation’ of monarchs. Unfortunately, there are no substitutes for where monarchs can lay their eggs.” In The New York Times November 2014 article “For the Monarch Butterfly, a Long Road Back,” the report is dire: “Less than 20 years ago, a billion butterflies from east of the Rocky Mountains reached the oyamel firs, and more than a million western monarchs migrated to the California coast to winter among its firs and eucalypts. Since then, the numbers have dropped by more than 90 percent, hitting a record low in Mexico last year after a three-year tailspin.” By classifying it as a noxious weed, the native milkweed was nearly eradicated along with its symbiotic partner, the monarch butterfly.

â&amp;#x20AC;&amp;#x153;Look deep into nature, and then you will understand everything better.â&amp;#x20AC;? ~ Albert Einstein

Over the past decades, pollinator populations declined significantly for a variety of reasons including, but not limited to, habitat loss, use of the "cides" (herbicides, insecticides, pesticides), and common garden & landscape practices. In the Southern Farm & Garden spring 2018 issue, a six-page feature article, Restoring Pollinator Populations, gives an overview of challenges facing pollinator populations along with tips for pollinator-friendly gardens. 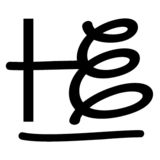