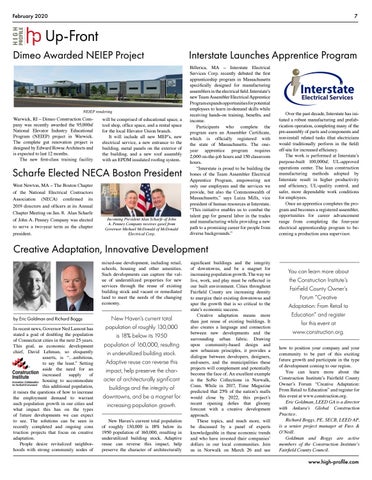 will be comprised of educational space, a tool shop, office space, and a rental space for the local Elevator Union branch. It will include all new MEP’s, new electrical service, a new entrance to the building, metal panels on the exterior of the building, and a new roof assembly with an EPDM insulated roofing system.

Scharfe Elected NECA Boston President West Newton, MA – The Boston Chapter of the National Electrical Contractors Association (NECA) confirmed its 2019 directors and officers at its Annual Chapter Meeting on Jan. 8. Alan Scharfe of John A. Penney Company was elected to serve a two-year term as the chapter president.

Interstate Launches Apprentice Program Billerica, MA – Interstate Electrical Services Corp. recently debuted the first apprenticeship program in Massachusetts specifically designed for manufacturing assemblers in the electrical field. Interstate’s new Team Assembler Electrical Apprentice Program expands opportunities for potential employees to learn in-demand skills while receiving hands-on training, benefits, and income. Participants who complete the program earn an Assembler Certificate, which is officially registered with the state of Massachusetts. The oneyear apprentice program requires 2,000 on-the-job hours and 150 classroom hours. “Interstate is proud to be building the bones of the Team Assembler Electrical Apprentice Program, empowering not only our employees and the services we provide, but also the Commonwealth of Massachusetts,” says Luiza Mills, vice president of human resources at Interstate. “This initiative enables us to combat the talent gap for general labor in the trades and manufacturing while providing a new path to a promising career for people from diverse backgrounds.”

Electrical Services Over the past decade, Interstate has initiated a robust manufacturing and prefabrication operation, completing many of the pre-assembly of parts and components and non-install related tasks (that electricians would traditionally perform in the field) off-site for increased efficiency. The work is performed at Interstate’s purpose-built 100,000sf, UL-approved operations center. The lean construction manufacturing methods adopted by Interstate result in higher productivity and efficiency, UL-quality control, and safer, more dependable work conditions for employees. Once an apprentice completes the program and becomes a registered assembler, opportunities for career advancement range from completing the four-year electrical apprenticeship program to becoming a production area supervisor.

Creative Adaptation, Innovative Development mixed-use development, including retail, schools, housing and other amenities. Such developments can capture the value of underutilized properties for new services through the reuse of existing building stock and vacant or remediated land to meet the needs of the changing economy. by Eric Goldman and Richard Boggs In recent news, Governor Ned Lamont has stated a goal of doubling the population of Connecticut cities in the next 25 years. This goal, as economic development chief, David Lehman, so eloquently asserts, is “…ambitious, to say the least.” Setting aside the need for an increased supply of housing to accommodate this additional population, it raises the questions of how to increase the employment demand to warrant such population growth in our cities and what impact this has on the types of future developments we can expect to see. The solutions can be seen in recently completed and ongoing cons truction projects that focus on creative adaptation. People desire revitalized neighborhoods with strong community nodes of

significant buildings and the integrity of downtowns, and be a magnet for increasing population growth. The way we live, work, and play must be reflected in our built environment. Cities throughout Fairfield County are increasing density to energize their existing downtowns and spur the growth that is so critical to the state’s economic success. Creative adaptation means more than just reuse of existing buildings. It also creates a language and connection between new developments and the surrounding urban fabric. Drawing upon community-based design and new urbanism principles, it provides a dialogue between developers, designers, end-users, and the municipalities these projects will complement and potentially become the face of. An excellent example is the SoNo Collections in Norwalk, Conn. While in 2017, Time Magazine predicted that 25% of the nation’s malls would close by 2022, this project’s recent opening defies that gloomy forecast with a creative development approach. These topics, and much more, will be discussed by a panel of experts knowledgeable in these economic trends and who have invested their companies’ dollars in our local communities. Join us in Norwalk on March 26 and see 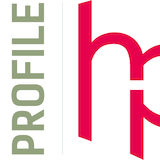 This is High-Profile's annual focus on restoration and renovation in New England, including a list of Rhode Island's most endangered propert...

This is High-Profile's annual focus on restoration and renovation in New England, including a list of Rhode Island's most endangered propert...