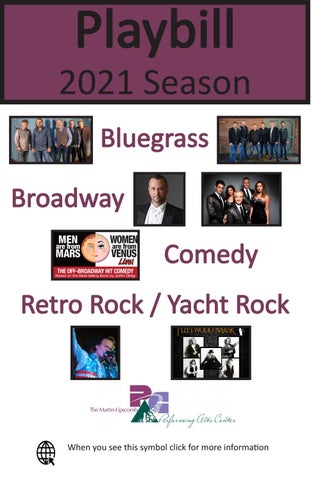 When you see this symbol click for more information

Whoa! What a Year! I can sincerely say that I’m grateful that we are on the other side, and so very grateful to be able to invite our audiences back into the theater to enjoy LIVE music once again. But, I also must say that I am most grateful for all of our patrons; you stepped up and helped us keep our doors open, our concerts sponsored, our memberships ongoing, our spirits uplifted. Never has there been a truer statement: We couldn’t have done it without you. THANK YOU! There is exciting news: Construction on the new building will begin mid-June. I’ve been told we can have concerts in the new theater in June 2022. Fingers crossed. Visit our website: (www.HighandsPerformingArts.com) to watch the progress via a live webcam. Please reach out if I may address any questions or concerns. Mary Adair Trumbly

Performing Arts Center Board of Directors

Since forming nearly 50 years ago, The Seldom Scene has brought both freewheeling joy and immaculate musicianship to their take on bluegrass, offering up spirited interpretations of songs from limitless genres. On their new album Changes, the band sharpens their focus to a highly specific body of work: songs first recorded in the 1960s and very early ‘70s, rooted in the archetypal storytelling of classic singer-songwriters. And in taking on the music of iconic artists like Bob Dylan and Townes Van Zandt, The Seldom Scene perform a sort of subtle magic; transforming the most stripped-bare songs into harmony rich and elaborately arranged compositions, while wholly sustaining the charmed simplicity of each piece. On Changes, The Seldom Scene more than proves itself up to the task, gracing every song with breathtaking instrumental interplay and heavenly three-part harmonies. Co-produced by the band and Rounder Records co-founder Ken Irwin, the album also spotlights The Seldom Scene’s sheer ingenuity as song arrangers, with even the most starkly composed tracks taking on wondrously intricate textures and tones. Sponsored by Ray & Diane McPhail

Broadway: Terry Barber with Grace Fields Saturday, June 26, 2021 7:30pm With an extraordinarily broad vocal range and natural fluency in many musical styles, countertenor Terry Barber has been featured on some of the world’s most storied stages and has worked with many of the music industry’s most prestigious figures. His voice has appeared on every major record label, with Grammy-winning artists like Chanticleer, Madonna, Jewel, Chaka Khan, Cyndi Lauper, Steve Smith, and many more. Whether performing classical or popular favorites, he “breathes new life into everything he sings” and crafts what the Los Angeles Times calls “performances of great vitality and verve.” “A musical experience; entertaining beyond what we imagined “classical” could be, and yet informative and inspiring. His use of voice challenges what we thought possible and every performance is delivered as a piece of theater. He took our audience by the hand and helped them to connect with the art, resulting in laughs, tears, and a real connection with this genuine artist we can’t wait to invite back. His concert was among our all-time favorites”.– Julie Hassett, Executive Director, Colorado River Concert Association Grace Fields has been featured on NBC’s the Today Show

performing with Hugh Jackman, and has been in multiple musical theatre productions across the globe. Ms. Field has sung at theatres including Broadway’s New Amsterdam Theatre, Broadway’s New Victory Theatre, the Barclay Center, The Public Theatre, Jazz at Lincoln Center, and Off Broadway’s New World Stages. Grace has also had the privilege to work with Broadway’s Alan Menken, Stephen Schwartz, Rebecca Luker, Seth Rudetsky, Anthony Rapp, and others. Ms. Field has also sung with Multi Tony Award Winner Audra McDonald, Cynthia Elviro, Shoshana Bean and Billy Porter. She most recently performed on Broadway in “Disney on Broadway 25th Anniversary Special” with Whoopi Goldberg at the New Amsterdam Theatre!

Comedy: Men are from Mars

Women are from Venus

The Off-Broadway hit comedy Men Are From Mars – Women Are From Venus LIVE!, is a one-man fusion of theatre and stand-up, and is a light-hearted theatrical comedy based on the New York Times #1 best-selling book of the last decade by John Gray. Moving swiftly through a series of vignettes, the show covers everything from dating and marriage to the bedroom. This hysterical show will have couples elbowing each other all evening as they see themselves on stage. Sexy and fast paced, this show is definitely for adults, but will leave audiences laughing and giggling like little kids! When Mars and Venus collide, the adventures are earthshatteringly hysterical. It's a great recipe for a date night out: a little storytelling blended with some comedy and a dash of sage wisdom from the book. A delicious evening of entertainment! Sponsored by Jane Webb & David LaCagnina, Margie & Milton Ruben Faye & Irwin Siegel

September 17, 2021 7:30pm Neil Diamond, the legendary icon, is now entering his 5th decade of music with over 400 songs and 46 albums to his credit. His songs are about love and friendship, loneliness and joy, freedom and sorrow. It is the purity of his message that has allowed him to last for so long. So how do you top perfection? Impossible! With the unsurpassed talents of Neil Diamond, one can only hope to come close. That is the remarkable talent of Neil Zirconia. He has expertly captured the essence and the passion of Neil Diamond, with all of the movements, expression, style and music that has made Neil Diamond the greatest entertainer of our time. Neil Zirconia will take you on an exciting journey down memory lane, that only Neil himself can inspire. He will hold your attention with an on stage presence and charisma that is pure Neil. Not to mention his unique baritone voice and singing ability that so amazingly resembles Neil Diamond, you won’t believe your ears. The likeness is extraordinary. Neil Zirconia has perfected all the emotion, excitement and the magic that is Neil Diamond. People of all ages are touched by the power of his words and the beauty of his music. Neil Zirconia’s impeccable professionalism and the ability to remain true to THE SOLITARY MAN, will give everyone an evening to treasure, filled with YESTERDAY’S SONGS and BEAUTIFUL NOISE. Sponsored by Geri & Wade Coleman, Carol & Stiles Kellett Virginia & Wilbur Warner

YOUR HIGHLANDS NEIGHBOR YOUR WEALTH ADVISOR

We bring decades of experience in helping families through both good and challenging times. Our commitment continues for the Highlands community.

West Paces Advisors is a privately held multi-family office serving those with portfolios of $2 million or more.

Geoff Sewell and Simone Lanham co-founded the world’s first opera band, Amici Forever in 2002 which went on to sell over 3.5 million albums worldwide and have two No.1 albums. Following the success and fan base enjoyed by Amici Forever, Geoff and Simone decided to create BRAVO Amici in 2010, which includes original cast member and tenor, Geoff Sewell. BRAVO Amici consists of two sopranos and three tenors from Geoff and Simone’s parent entertainment company, Incognito Artists Ltd (based in New York and London). BRAVO Amici have wowed audiences all over the world, from London to LA, Miami to Moscow, St. Moritz to Sardinia, New York to New Zealand. Combining the essential elements of classical crossover - pop, Broadway, the West End and opera - this group of endlessly talented friends and stage stars melts hearts and blows minds in every theater in which they perform, becoming a worldwide phenomenon over the years. With a show that not only entertains and excites audiences, but also connects with them on a deeper level (at a time when the world needs all the love, acceptance and inclusion it can get) you can guarantee it’s a concert you’ll never forget because of how they made you FEEL. Sponsored by Nancy & Charles Harrison, Janey & Jon Swift Jane Webb & David LaCagnina, Jane Young

Fleetwood Mask is the ultimate Fleetwood Mac tribute band in the U.S. Endorsed by Mick Fleetwood who states “I’m glad to know the music of Fleetwood Mac is in good hands indeed.” The band performs the greatest hits from the early 1960’s blues band with Peter Green, through the most popular line up of Lindsey Buckingham, Stevie Nicks and Christine McVie.

Fleetwood Mask has been performing live for 8 plus years perfecting their amazing tribute to one of rock’s legendary bands. With hundreds of performances under their belt, they are consummate professionals that deliver the best to audiences across the U.S. Sponsored by Beverly Ellars

at T he Farm

For more details and to book online, visit OldEdwardsHospitality.com/Events

Sideline is a pedigreed six-piece powerhouse whose style has set the pace in Bluegrass for over two decades. Founders Steve Dilling (banjo), guitarist Skip Cherryholmes and Jason Moore (bass) can all claim their own historical significance to the genre as members of highly awarded groups, multiple Grand Ole Opry appearances and years of national and international touring. What started as a side project for the seasoned players soon moved to the front and center and they began to record and release albums in earnest. In 2019, Sideline won the IBMA Song Of The Year Award for their hit single, “Thunder Dan.” To listen to Sideline reminds the fan of why so many people fall in love with Bluegrass in the first place; pulse-pounding drive, songs sung from the heart, perfected timing and dynamics as well as a visceral emotion in the rendering. A band that was started as an off-season fun experiment has become a full-time dream team of players and singers, including its latest additions, Zack Arnold (mandolin), Jamie Harper (fiddle) and guitarist Jacob Greer. Whether live or in the studio, the sextet moves dynamically from well chosen, hard-hitting neo-traditional covers of classic songs to new material, all curated by a band with a perfect sense of who they are and what they have to say. Combine all this with their on-stage energy and finesse as well as their powerful and affecting harmonies, and you have the embodiment of the North Carolina Bluegrass sound. Sideline has released 5 national projects and records for the highly awarded Mountain Home Music Company based near Asheville, NC.

Visionaries for the Visual Arts

The Bascom creates visual art experiences that inspire and empower individuals and communities through seeing, thinking and doing.

THANK YOU We couldn’t have made it without YOU!

for making the Dream a Reality

Theater Arts benefits both Students and Society, because students of Theater Arts gain powerful tools for: *Understanding human experiences, both past and present. *Teamwork and collaboration. *Adapting to and respecting others’ diverse ways of thinking, working, and expressing themselves. *Analyzing nonverbal communication. *Improving verbal communication. *Gaining Self-Esteem & Poise which crosses over into the classroom to support academic success, including STEM classes. *Studying a wide variety of literature, history, sociology, art, music & dance.

If you can identify the difference in these two images, you’re our ideal client.

At Landmark we understand the excitement of pulling into your vacation home driveway, and the importance of discovering everything is just right, like you’d expect, or even better, that’s the Landmark Experience. We have a dedicated rentals team who understands quality, attention to detail and service. If you are a homeowner and have thought about listing your home in a rental program, give us a call. Our team is ready to discuss the process.

The very BEST of Highlands and Cashiers! We are so lucky to have such a beautifully published magazine for the plateau! Wonderful job!! - C. Gates

Need to know what’s happening on the plateau? Then look NO further! The Laurel is the best way to be in the know! - J. Jones 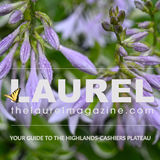 The Laurel Magazine of Highlands NC and Cashiers NC