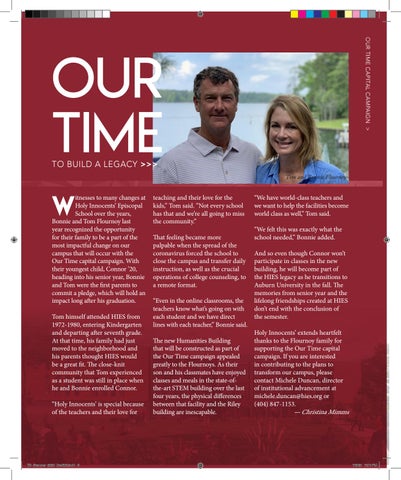 itnesses to many changes at Holy Innocents’ Episcopal School over the years, Bonnie and Tom Flournoy last year recognized the opportunity for their family to be a part of the most impactful change on our campus that will occur with the Our Time capital campaign. With their youngest child, Connor ’20, heading into his senior year, Bonnie and Tom were the first parents to commit a pledge, which will hold an impact long after his graduation. Tom himself attended HIES from 1972-1980, entering Kindergarten and departing after seventh grade. At that time, his family had just moved to the neighborhood and his parents thought HIES would be a great fit. The close-knit community that Tom experienced as a student was still in place when he and Bonnie enrolled Connor. “Holy Innocents’ is special because of the teachers and their love for

teaching and their love for the kids,” Tom said. “Not every school has that and we’re all going to miss the community.” That feeling became more palpable when the spread of the coronavirus forced the school to close the campus and transfer daily instruction, as well as the crucial operations of college counseling, to a remote format. “Even in the online classrooms, the teachers know what’s going on with each student and we have direct lines with each teacher,” Bonnie said. The new Humanities Building that will be constructed as part of the Our Time campaign appealed greatly to the Flournoys. As their son and his classmates have enjoyed classes and meals in the state-ofthe-art STEM building over the last four years, the physical differences between that facility and the Riley building are inescapable.

“We have world-class teachers and we want to help the facilities become world class as well,” Tom said. “We felt this was exactly what the school needed,” Bonnie added. And so even though Connor won’t participate in classes in the new building, he will become part of the HIES legacy as he transitions to Auburn University in the fall. The memories from senior year and the lifelong friendships created at HIES don’t end with the conclusion of the semester. Holy Innocents’ extends heartfelt thanks to the Flournoy family for supporting the Our Time capital campaign. If you are interested in contributing to the plans to transform our campus, please contact Michele Duncan, director of institutional advancement at michele.duncan@hies.org or (404) 847-1153. 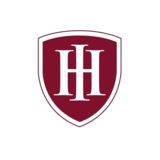