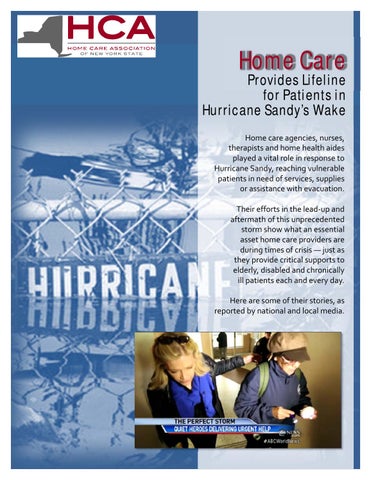 Provides Lifeline for Patients in Hurricane Sandy’s Wake Home care agencies, nurses,  therapists and home health aides  played a vital role in response to  Hurricane Sandy, reaching vulnerable  patients in need of services, supplies  or assistance with evacuation.  Their efforts in the lead‐up and  aftermath of this unprecedented  storm show what an essential  asset home care providers are  during times of crisis — just as  they provide critical supports to  elderly, disabled and chronically  ill patients each and every day.  Here are some of their stories, as  reported by national and local media.

“They’d been trapped in high‐rise buildings without water, heat or working elevators,  [Jewish Home Lifecare’s Laura Radensky] said, and “in a lot of instances, we’re the  only ones making contact.”

About 150 of the agency’s 1,200 home‐care clients faced potential crises, she estimated… For five  days, Ruth Weissblatt endured the storm and its aftermath in her Manhattan apartment with a loyal  home care aide who on Sunday took the last No. 3 train out of Brooklyn to join her. Ms. Weissblatt,  98 and ailing, had sufficient food, water and flashlights only because her 67‐year‐old nephew came  by each day, lugging supplies up nine flights. “I can’t imagine how anyone my age could survive  without that kind of help,” she said.   ‐New York Times, “Old, Frail and in Harm’s Way”

I want to take you out into an invisible world in the skies of New  York City … They are out in the dark, the National Guard, city  meals on wheels, carrying heavy loads up stair after stair in  high rises – people like nurse Rosita Ortiz, one of the thousands  of people who work for the Visiting Nurse Service of New York,  checking on patients who have little food, little water, no power… Rosita checks Carmen’s blood pressure,  takes her temperature, makes sure she’s all right.” ‐Diane Sawyer, ABC World News, accompanying Nurse Rosita Ortiz on visit to patient’s home

“Godfrey and Bradley immediately  volunteered to lend a hand downstate  … They worked four consecutive 12‐ hour overnight shifts at a Nassau  Community College shelter designated  for special needs victims: the elderly,  the disabled and the ill.”

At their shelter, 107 people crammed into 107 cots  and needed food, water, clean sheets, blankets,  clothes and – as the nurses soon found out – much,  much more.  ‐Daily Gazette, “Nurses aid Storm’s most vulnerable  victims,” a report on Visiting Nurse Service of  Schenectady and Saratoga Counties Nurses Kim  Godfrey and Kathy Bradley who volunteered in the  region affected by Hurricane Sandy

One lasting image of Superstorm Sandy will be very sick  patients being evacuated from flooded hospitals. But  less visible are thousands of patients who rely on visiting  nurses and home health aides for care ranging from  bathing and feeding to oxygen and ventilators.

“Remarkably, home care providers say they  know of no patients who lacked for needed  care in the storm’s wake. Resourceful  nurses, physical therapists, aides and other  personnel somehow surmounted flood,  impassable roads, downed trees and  dwindling gasoline to get to their patients.”

Orael Keenan runs a Visiting Nurse Association in Nassau  County, Long Island, where 80 percent of the area lost  power – including her own office until Thursday  afternoon. Phone service was out until Friday. Thirty‐ two of her 400 clients were evacuated from their  homes to a family member or another caregiver’s home.

Durable medical equipment companies delivered needed supplies ahead of the storm and were out again by Thursday “so  anybody who needed a tank of oxygen was able to get it,” she reports. But by week's end Keenan's nurses – and those at other agencies NPR talked to – were literally running out of gas. “It’s an  extreme issue,” Keenan says. “Some of my nurses are down to a quarter of tank and they’re sitting at a gas station right  now. Sooner or later, this will impact care.” NPR Shots – Health News, “Home Health Care Proves Resilient In Face of Sandy Destruction”

As two burners on his stove provided warmth on  Thursday, Suzanne Gilleran, 47, carefully cut the  gauze around Mr. Oberlin’s leg. “How’s your pain  today?” she asked. “Did you take anything?”  As parts of the city edged toward some semblance  of normal on Thursday, tens of thousands of  people like Mr. Oberlin, who depend on essential  home medical care, remained tenuously connected  to lifesaving services by agencies like Partners in  Care, an affiliate of the Visiting Nurse Service of  New York.

“Nine flights above East 22nd Street,  Russell Oberlin, 84, had no heat or  electricity, no phone, no elevator service  and two cancerous tumors on his right  leg that required daily medical  attention.”

“In the Sheepshead Bay area of Brooklyn,  where flooding reached the second floor and  destroyed insulin supplies, Sergey Nazarenko,  another nurse with VIP Certified Health  Services, helped some 160 residents in a  facility for the mentally ill wade to rescue  buses that carried them to a psychiatric  facility in the neighboring borough of Queens.”

On Brooklyn’s Coney Island, where the sea flooded  basements of high‐rise apartments, knocking out lights,  heat and elevators, nurse Igor Friedman with Brooklyn,  N.Y.‐based VIP Certified Health Services climbed 20  stories in a pitch‐black stairwell to give his patient a badly  needed insulin injection.

In Garden City, Long Island, where many streets were  impassable for cars – if there was gas to fuel them – RN  Irene Gerland with Winthrop University Hospital Home  Health Agency in Mineola, Long Island, mounted her bicycle to visit patients over a nine‐mile route. While she found that several had been taken away by family members,  others were alone in the dark without heat and no way to replenish prescription drugs, she says. Home Health Line, “Hurricane Sandy: home health nurses excel in a tough test” 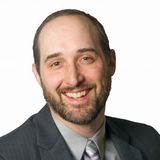