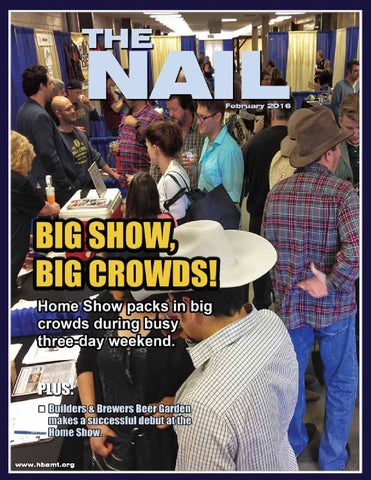 The annual HBAMT Home Show had a successful three-day run at the Fairgrounds Nashville last month.

The first ever “Builders and Brewers” Beer Garden made a splash during the busy Saturday afternoon hours at the Home Show.

ON THE COVER: Consistent crowds packed the aisles of the Fairgrounds Nashville during the 2016 Home Show last month. More details on page ten. February, 2016

ales of newly built, single-family homes rose 14.5 percent to 501,000 units in 2015, the highest level since 2007, according to newly released data from HUD and the U.S. Census Bureau. Meanwhile, sales in December increased 10.8 percent to a seasonally adjusted annual rate of 544,000 from an upwardly revised November reading. “The December sales report is a great end to a very strong year,” said Ed Brady, chair-

Relatively low interest rates and an improving economy are motivating buyers to make a new home purchase housing is now at its highest level since October, 2009. 6 The NAIL

man of the National Association of Home Builders (NAHB) and home builder and developer from Bloomington, Ill. “As we move forward in 2016, we should see the housing market continue to make lasting gains.” “Relatively low interest rates and an improving economy are motivating buyers to make a new-home purchase,” said NAHB Chief Economist David Crowe. “Builders are upping their inventory in response to heightened consumer interest. Housing inventory is now at its highest level since October 2009.” Sales increased in all four regions in December. The Midwest, West, Northeast and South all posted respective gains of 31.6 percent, 21 percent, 20.8 percent and 0.4 percent. The inventory of new homes for sale was 237,000 units in December. This is a 5.2-month supply at the current sales pace. n

he millennial generation is poised to make a significant impact on home design with their strong preferences for energy efficiency and smart home technology; comfortable, workable kitchens and more casual spaces, said speakers today from the National Association of Home Builders (NAHB) and Better Homes and Gardens. Both spoke at a press conference on housing preferences for millennials, Gen X, boomers and seniors held today during the NAHB International Builders’ Show in Las Vegas. But first, they have to move out of their parents’ homes and into a place of their own, said NAHB Assistant Vice President for Survey Research Rose Quint. In 2015, about 15 percent of adults ages 25-34 lived with a

parent, about 3 percent more than the highest share between 1983 and 2007 – 12 percent. That translates into 1.3 million people who normally “would be out there, forming their own households, demanding their own units,” either as buyers or renters, she said. Quint had anticipated that new mortgage programs and looser mortgage insurance requirements unveiled a year ago would have led to an increase in consumers buying homes for the first time. But a look at the size of the typical new single-family home in 2015 found the opposite: home sizes grew to an average of 2,721 square feet, the highest yet, and an indication that the new-home market continues to be dominated by move-up buyers, rather than first-time buyers. “Before we see that expected pullback in

two factors boosting the return of buyers to the new home market. “The packed crowds and positive energy throughout this year’s Design & Construction Week are another indication of the residential construction industry’s ongoing recovery,” said NAHB Chairman Ed Brady. IBS organizers also noted an increase in international exhibitors, with 460 exhibitors representing 25 countries and filling 72,000 square feet--or 14 percent of total IBS exhibit space. Overall, Design & Construction Week boasted more than 3,750 exhibitors and 1.2 million net square feet of exhibit space. “We reached our goal of creating the ‘must attend, must exhibit’ week for anyone and everyone in the residential construction industry,” said

square footage and price, we’re going to have to see a significant return of the first-time buyer,” who is more likely to buy a smaller home at a lower price point, Quint said. This year, home buyers of all ages say they are looking for homes with separate laundry rooms, energy-star appliances and windows, exterior lighting and a patio. What they don’t want are rooms with cork flooring, elevators, pet washing stations, expensive outdoor kitchens and fireplaces, and two-story entryways and family rooms. And their countertops should be granite, but never laminate, according to a Fall 2015 survey of potential buyers. In terms of house type, buyers want a detached, single-family home: 65 percent of all buyers and 68 percent of millennials expressed that preference. That number rises to 72 percent with Gen X (born between 1965 and 1979) but falls somewhat to 55 percent with those born before 1945, Quint said.

Tom Swartz, chair of the NAHB Convention and Meetings Committee, during his report to the NAHB Board of Directors on the last day of IBS. Crowded education sessions held during the show demonstrated that builders and remodelers are taking a bigger interest in automating their purchasing, accounting and sales systems. There were more than 120 education sessions during the event. Swartz noted the expanded educational offering on the show floor, with more than 30 companies offering almost 90 “Exhibitor Forums,” and the addition of a new Exhibitor Forum Presentation Stage in Central Hall, where 16 exhibitors demonstrated their most innovative products. Visit BuildersShow.com to see photos and videos of the show, as well as more information about the exhibitors, events, educational sessions and award winners. The 2017 IBS, Jan. 10-12, moves to the Orange County Convention Center in Orlando. n

Builder confidence in 55+ market ends year on a positive note

uilder confidence in the single-family 55+ housing market remains strong in the fourth quarter of 2015 with a reading of 61, up one point from the previous quarter, according to the NAHB’s 55+ Housing Market Index (HMI). This is the seventh consecutive quarter with a reading above 50. “Builders and developers for the 55+ housing sector continue to report increased optimism in the market,” said Jim Chapman, chairman of NAHB’s 55+ Housing Industry Council and president of Jim Chapman Homes LLC in Atlanta. “We are seeing steady consumer demand for homes and communities that are designed to address the specific needs of the mature homebuyer.” There are separate 55+ HMIs for two segments of the 55+ housing market: single-family homes and multifamily condominiums. Each 55+ HMI measures builder sentiment based on a survey that asks if current sales, prospective buyer traffic and anticipated six-month sales for

that market are good, fair or poor (high, average or low for traffic). An index number above 50 indicates that more builders view conditions as good than poor. One of the three index components of the 55+ single-family HMI posted an increase from the previous quarter: traffic of prospective buyers increased six points to 52. Present sales held steady at 65 while expected sales for the next six months decreased four points to 63.

The 55+ multifamily condo HMI dropped eight points to 42, falling back to a range typical of the past year and a half. All three components decreased as well: present sales fell 10 points to 44, expected sales for the next six months fell 10 points to 46 and traffic of prospective buyers edged down three points to 37. Three of the four indices tracking production and demand of 55+ multifamily rentals posted gains in the fourth quarter. Present production and expected future production both rose one point to 56 and 61, respectively, and future demand increased three points to 71, while current demand for existing units fell four points to 66. “This quarter’s 55+ HMI is in line with our forecast for the overall housing market, which shows a gradual, steady recovery,” said NAHB Chief Economist David Crowe. “In addition, the 55+ housing market is benefitting from growing home equity on the balance sheets of 55+ households, an improving economic outlook, historically low mortgage rates and a growing population as baby boomers age.” For the full 55+ HMI tables, please visit www.nahb.org/55hmi. n

he 2016 Home Show opened January 29 at the Fairgrounds Nashville and drew big crowds throughout a busy three-day weekend. Taking advantage of the unseasonably pleasant weather, attendees flocked to the event where they found a wealth of home improvement products and services, helpful vendors, and educational seminars. A big hit a this year’s Home Show was the first ever “Builders and Brewers” Beer Garden, held the second day of the event. See page 12 of this issue for more details and a list of participants The 2017 Home Show is already signing up vendors for next year’s event scheduled for another three-day run January 13-15. Call the HBAMT at (615) 377-1055 to request your 2017 Home Show registration form. Or visit the event’s page at www.hbamt.org for a downloadable one-page registration form. n

Home Show Chairman Marty Maitland took to the airwaves to promote the 2016 show. Clockwise from above: with Meryll Rose on Talk of the Town; mixing it up with 92.9’s Anna Marie; on set with Kacy Hagerty for a More at Midday segment.

Better Homes and Gardens Brand Executive Editor Jill Waage echoed Quint’s findings on preferences for well-equipped kitchens and casual, comfortable living spaces. What’s important about this generation is their comfort with technology. Millennials “are leading the way on this,” Waage said. “They are the first generation to walk into homeownership with a smartphone in their hands.” These millennials want to use technology to make entertainment choices easier, monitor the comings and goings of packages, repairmen and their children, and improve their health and well-being. When it comes to product choices, “they’ve read the ratings, comments and reviews, and they know what’s worth it,” and have probably created a Google alert so they know when it’s on sale, she said. Their home improvement preferences center on home organization and workspaces, as the separation between working in an office and telecommuting continues to blur. “This generation is searching out ideas, following bloggers,” and creating Pinterest boards with their preferences, Waage said. “They’ve already curated their dream home online, saving it on their boards so they can [be ready] when the day finally comes.” The survey results are also important to home builders in the 55+ market, said David

Peskin, president of Reverse Mortgage Funding LLC (RMF), which sponsored the NAHB study. “The boomer generation is currently experiencing a transition to their next phase of life, so the home building and finance industries should commit to better understand the needs of this generation to offer the best solutions for them,” Peskin said. “The results of this important survey shed

light on the buying preferences of older Americans, and confirm an uneasiness over finances is one of the primary reasons they are hesitant about relocating to a new residence. We are committed to helping home owners age 62 and older meet their financial needs, so this data will be informative to the way we educate consumers about our Home Equity Conversion Mortgage for Purchase (H4P) product.” n

The February, 2016 issue of The Nail, the official publication of the Home Builders Association of Middle Tennessee (HBAMT).

The February, 2016 issue of The Nail, the official publication of the Home Builders Association of Middle Tennessee (HBAMT).