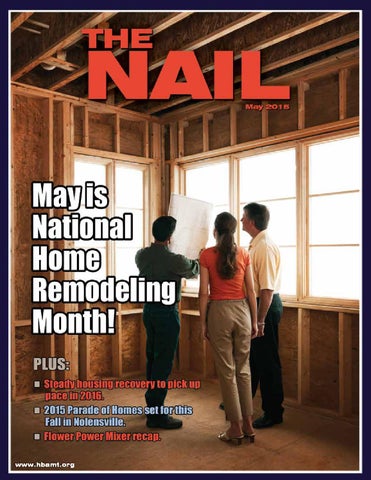 ON THE COVER: May is National Home Remodeling Month. There’s no better time to spruce up your home or tackle that much desired renovation project. May, 2015

The Metro/Nashville Chapter welcomed Jeff Fecteau, Senior Regulatory Engineer at Underwriters Laboratories, to their April meeting. Fecteau delivered a presentation about understanding the importance of UL during both the meeting and a special builder’s meeting that followed.

ales of newly built, single-family homes fell 11.4 percent in March to a seasonally adjusted annual rate of 481,000 units from an upwardly revised February reading, according to newly released data by the U.S. Department of Housing and Urban Development and the U.S. Census Bureau. “After two robust months of new home sales, some readjustment is inevitable,” said David Crowe, chief economist of the

This is the best first quarter since 2008, and attractive mortgage rates and pent-up demand should keep the market moving in the right direction. 6 The NAIL

National Association of Home Builders (NAHB). “This is the best first quarter since 2008, and attractive mortgage rates and pent-up demand should keep the market moving in the right direction.” “Our surveys show that builders remain optimistic about the housing market,” said NAHB Chairman Tom Woods, a home builder from Blue Springs, Mo. “We expect this spring to be a better buying season than we’ve seen in recent years.” The inventory of new homes for sale was at 213,000 in March, which is a 5.3-month supply at the current sales pace. Regionally, new home sales rose 5.9 percent in the Midwest. Sales fell 33.3 percent in the Northeast, 15.8 percent in the South and 3.4 percent in the West. n

John Ricketts, AECOM, was among the speakers who discussed recent storm water regulation changes and what to look forward to in 2016 during a special meeting at the HBAMT.

Tonya Esquibel from Summit Funding led an expert panel in a discussion about the appraisal process during the Sales and Marketing Council’s April meeting at the HBAMT. Special thanks to Summit Funding for sponsoring the meeting.

herwood Green Estates has been chosen by the HBAMT to host the 2015 Parade of Homes™ this fall. The event will open Saturday, October 3 and run daily through Sunday, October 18 at the scenic, estate-home community in Nolensville, Tenn. “We are excited to invite people to the beautiful community of Sherwood Green Estates this fall,” said Nolensville Mayor Jimmy Alexander. “Nolensville is proud to be a part of this year’s Parade and can’t wait to welcome visitors to the event.”

ing forward to giving attendees a show they won’t forget.” Interior decorating and design teams are currently being assembled by the Pa-

rade builders and will showcase the latest in home decor, interior design, construction and audiovisual technology. For more information please visit www.hbamt.org and follow the event right up until opening day on the 2015 Parade of Homes Facebook page (located in the HBAMT Facebook page events listings). n

“Our builders are going to create some truly special homes with unique features you won’t see anywhere else,” said McGowan, owner and president of Regent Homes and its subsidiary, Regent Sherwood Development, LLC. “We’re look-

ationwide housing starts rose 2 percent to a seasonally adjusted annual rate of 926,000 units in March from an upwardly revised February reading, according to newly released data from the U.S. Commerce Department. Single-family housing production rose 4.4 percent to a seasonally adjusted annual rate of 618,000 in March while multifamily starts dropped 2.5 percent to 308,000 units. “This reading demonstrates that the housing industry continues to make gains at a gradual pace,” said NAHB Chairman Tom Woods. “There are still some price sensitive buyers who remain on the fence.” “Builders are being careful not to add inventory beyond expected demand, especially as they struggle with increasing costs for lots, labor and materials,” said NAHB Chief Economist David Crowe. “However, pent-up demand, low mortgage interest rates and a growing economy should keep the housing industry moving forward throughout the rest of the year.”

Regionally, combined single- and multifamily starts increased the Northeast and Midwest, with respective gains of 114.9 percent and 31.3 percent. Housing production dropped 3.5 percent in the South and 19.3 percent in the West. Multifamily permits fell 15.9 percent to 403,000 while single-family permits rose 2.1 percent to 636,000. Regionally, the Northeast registered a permit gain of 39.8 percent, while the Midwest, South and West posted respective losses of 4.4 percent, 14.2 percent and 4.3 percent. Builder confidence slightly lower Builder confidence in the market for newly built, single-family homes in April rose four points to a level of 56 on the NAHB/Wells Fargo Housing Market Index (HMI) released recently. “As the spring buying season gets underway, home builders are confident that current low interest rates and continued job growth will draw consumers to the market,” said Woods.

“The HMI component index measuring future sales expectations rose five points in April to its highest level of the year,” said Crowe. “This uptick shows builders are feeling optimistic the housing market will continue to strengthen throughout 2015.” Derived from a monthly survey, the NAHB/Wells Fargo Housing Market Index gauges builder perceptions of current single-family home sales and sales expectations for the next six months as “good,” “fair” or “poor.” The survey also asks builders to rate traffic of prospective buyers as “high to very high,” “average” or “low to very low.” Scores for each component are then used to calculate a seasonally adjusted index where any number over 50 indicates that more builders view conditions as good than poor. All three HMI components registered gains in April. The component charting sales expectations in the next six months jumped five points to 64, the index measuring buyer traffic increased four points to 41, and the component gauging current sales conditions rose three points to 61. Looking at the three-month moving averages for regional HMI scores, the South rose one point to 56 and the Northwest held steady at 42. The Midwest fell by two points to 54 and the West dropped three points to 58. n

Housing recovery picking up pace Economists at NAHB’s Spring Webinar expect continued momentum in the housing market throughout the year and into 2016.

olid employment gains, attractive mortgage rates, a growing economy and pent-up demand will help keep the housing market moving forward throughout 2015 and into next year, according to economists who participated in April’s NAHB 2015 Spring Construction Forecast Webinar. “This should be a good year for housing, buoyed by sustained job growth, rising consumer confidence that is back to pre-recession levels and a gradual uptick in household formations,” said NAHB Chief Economist David Crowe. “We expect 2016 to be even better, due to a significant amount of pent-up demand and an economy that will be entering a period of reasonable strength and consistency.” Over the past seven years, Crowe estimates the slow recovery and uncertainty in the job and housing markets resulted in 7.4 million lost home sales. “While some of these sales will never take place, this does indicate how many sales were lost as fewer households decided

to move. We expect at least some of these to return in the form of new home sales as job and economic growth continue to firm.” A key demographic to help jump-start this process should come from the millennials. The share of first-time home buyers has traditionally averaged around 40 percent, but in the aftermath of the housing downturn it now stands at just under 30 percent. First-time buyers are expected to provide a boost to the housing market, as the unemployment differential between young people and others is shrinking, Crowe noted. Single-Family on the Rise Turning to the forecast, the NAHB Remodeling Market Index, which averages ratings of current remodeling activity with indicators of future activity, stands at 57 in the first quarter of 2015 and has been at or above 50 most of the past two years. A reading (continued on page 13)

The association’s Spring “Flower Power” Membership Mixer took place last month at the HBAMT offices. Bell Bottoms, tie-dye shirts and peace signs were all the rage during the groovy get-together. A big thanks to Tonya Esquibel, Summit Funding, and John Bell, Broker Title & Escrow for sponsoring the event! n

(continued from page 9) A reading above 50 indicates that more remodelers report market activity is higher (compared to the previous quarter) than report it is lower. NAHB is projecting that residential remodeling activity will increase 2.3 percent in 2015 over last year and rise an additional 2.4 percent in 2016. Single-family housing production is expected to post a 9 percent gain in 2015 to 704,000 units and jump an additional 39 percent to 977,000 units in 2016. On the multifamily side, production ran at 355,000 units last year, what could be considered a normal level of production, and is expected to continue in that range or modestly higher through 2015 and 2016.

Price Growth Fastest in Coastal Areas Focusing on new home sales, Sam Khater, deputy chief economist at CoreLogic, said that sales volume is weak, but pockets of strength exist. “New home price growth is fastest in the coastal states and eight of the top 10 healthiest new sale markets are in the Carolinas and Texas,” said Khater. Of the top 100 new-home sale markets, Houston leads the pack at 2,000 sales per month, followed by Dallas and Atlanta which are running at about half that pace. In terms

of volume, the bulk of the concentration is in southern markets. “Nashville and San Jose stand out as the fastest growing markets, and Atlanta and San Antonio are the best large markets,” said Khater. Only three new-sale markets are larger today than in 2000—Nashville, Oklahoma City and San Antonio. “We Really Have Turned the Corner” Also delving beneath the national numbers, NAHB Senior Economist Robert Denk said that the housing recovery continues to vary by state and region. “Housing demand is now being driven by population growth and employment and income growth,” said Denk. “We are reconnecting to underlying fundamentals. We really

have turned the corner.” The strongest housing markets are centered in several energy-producing states, including North Dakota, Texas, Oklahoma, Louisiana, Wyoming and Idaho. “The recent decline in oil prices is not hurting housing,” said Denk. “We haven’t seen it yet. We still expect energy output to be higher at the end of this year than last year.” Other states exhibiting strong employment and housing growth include North Carolina, South Carolina, Tennessee, Washington and Colorado. Using the 2000-2003 period as a healthy benchmark when single-family starts averaged 1.34 million units on annual basis, NAHB is projecting that single-family production, which bottomed out at an average 27 percent of normal production in early 2009, will rise to 61 percent of normal by the fourth quarter of this year and climb to 81 percent of normal by the end of 2016. In another way of looking at the long road back to normal, by the end of 2016, the top 40 percent of states will be back to near normal production levels, compared to the bottom 20 percent, which will still be below 75 percent. “What we are seeing, no matter what bucket you are in, the numbers are getting better,” said Denk. “There’s a broader recovery all around.” n May, 2015

The May, 2015 issue of The Nail, the official monthly publication of the Home Builders Association of Middle Tennessee (HBAMT).

The May, 2015 issue of The Nail, the official monthly publication of the Home Builders Association of Middle Tennessee (HBAMT).