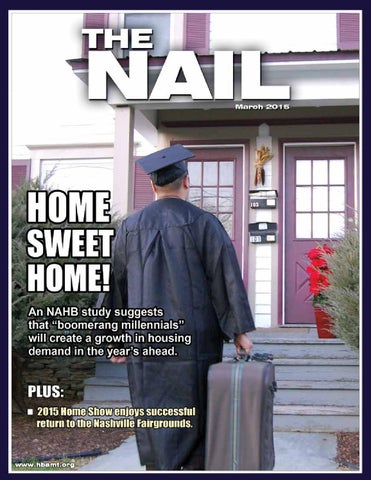 An NAHB study says to expect “boomerang millennials to provide a major boost to housing demand in the year’s ahead.

ON THE COVER: Boomerang Millennials could provide a major boost in housing demand in the year’s ahead. More details on page nine. March, 2015

ales of newly built, single-family homes dropped 0.2 percent in January to a seasonally adjusted annual rate of 481,000 units from an elevated December reading, according to newly released data by the U.S. Department of Housing and Urban Development and the U.S. Census Bureau. “The fact that January sales numbers maintained the gains we made in December is encouraging news, especially considering harsh weather affecting certain parts of the country,”

said Tom Woods, chairman of the National Association of Home Builders (NAHB) and a home builder from Blue Springs, Mo. “In a promising sign, new home sales have been trending at post-recession highs for the past two months,” said NAHB Chief Economist David Crowe. “As the economy strengthens and mortgage rates remain low, we can expect continued upward movement in the housing market this year.” The inventory of new homes for sale was at 218,000 in January, which is a 5.4-month supply at the current sales pace. Regionally, new home sales rose 19.2 percent in the Midwest and 2.2 percent in the South. Sales dropped 0.8 percent in the West and 51.6 percent in the Northeast, most likely due to adverse weather conditions in that geographic area. n

Housing starts down 2 percent in January

ationwide housing starts fell 2 percent to a seasonally adjusted annual rate of 1.065 million units in January, according to newly released data from the U.S. Commerce Department. This drop was mainly due to a 22.2 percent decrease in the Midwest. Single-family housing production fell 6.7 percent to a seasonally adjusted annual rate of 678,000 in January while multifamily starts rose 7.5 percent to 387,000 units. “These numbers are consistent with our recent surveys and are primarily due to severe weather hitting the Midwest and other parts of the country,” said NAHB Chairman Tom Woods. “After a strong single-family report in December, it is not surprising to see some pull back in January,” said NAHB Chief Economist David Crowe. “With continued job creation and a growing economy, single-family production should make gains in the year ahead.” Regionally in January, combined single- and multifamily housing production increased 6.5 percent in the South. Total starts fell in the Northeast, Midwest and West, with respective losses of 3.5 percent, 22.2 percent and 3.4 percent. Overall permit issuance was down 0.7 per-

cent in January to a rate of 1.053 million. Single-family permits decreased 3.1 percent to 654,000 units while multifamily permits rose 3.6 percent to a rate of 399,000 units. Regionally, permits were mixed in January. The Northeast and West registered gains of 29.5 percent and 16.8 percent, respectively, while the Midwest and South dropped 16 percent and 8.7 percent, respectively. Builder confidence slightly lower Builder confidence in the market for newly built, single-family homes in February fell two points to a level of 55 on the NAHB/Wells Fargo Housing Market Index (HMI) released recently. “Overall, builder sentiment remains fairly solid, with this slight downturn largely attributable to the unusually high snow levels across much of the nation,” said Woods. “For the past eight months, confidence levels have held in the mid- to upper 50s range, which is consistent with a modest, ongoing recovery,” said Crowe. “Solid job growth, affordable home prices and historically low mortgage rates should help unleash growing pent-up demand and keep the housing market moving

forward in the year ahead.” Derived from a monthly survey that NAHB has been conducting for 30 years, the NAHB/ Wells Fargo Housing Market Index gauges builder perceptions of current single-family home sales and sales expectations for the next six months as “good,” “fair” or “poor.” The survey also asks builders to rate traffic of prospective buyers as “high to very high,” “average” or “low to very low.” Scores for each component are then used to calculate a seasonally adjusted index where any number over 50 indicates that more builders view conditions as good than poor. Two of the three HMI components posted losses in February. The component gauging current sales conditions edged one point lower to 61 while the component measuring buyer traffic fell five points to 39. The gauge charting sales expectations in the next six months held steady at 60. Looking at the three-month moving averages for regional HMI scores, the Northeast fell a single point to 46, and the Midwest and South each posted a two-point drop to 54 and 57, respectively. The West rose two points to 68. Editor’s Note: The NAHB/Wells Fargo Housing Market Index is strictly the product of NAHB Economics, and is not seen or influenced by any outside party prior to being released to the public. HMI tables can be found at nahb.org/hmi. More information on housing statistics is also available at housingeconomics.com. n

NAHB Members). [Editor’s Note: Editors who are interested in receiving a complimentary copy of Financial Forecasting in Microsoft Excel to review for their publications should contact Patricia Potts at 202-266-8224 or ppotts@nahb.org].

Jeff Prager has founded, owned and sold multiple businesses, including Strauss Homes, a large home building company based in Denver. He’s the founder of Backroom Management Services, a full-service accounting firm specializing in the construction industry, and promotes the concept of Cash Flow Engineering as a way to streamline business management and ensure consistent and predictable cash flow. Financial Forecasting in Microsoft Excel is available for purchase ($44.95 Retail/$39.95 NAHB Member, ISBN 978-0-86718-733-5) at BuilderBooks.com or by calling 800-2232665. The eBook is available at ebooks. builderbooks.com ($31.99 Retail/$26.99 for

recent study of “Boomerang Millennials” who move out of their parents’ home only to move back in may have important implications for this key demographic and what it means for the housing market. The NAHB examined recent research conducted by Judith Dey and Charles Pierret using data from the National Longitudinal Study of Youth 1997. The examination found higher incidence of “re-launch” for Millennials with a Bachelor’s degree compared to those with a lower education attainment and higher incidence of “re-launch” for Millennials from higher parental income household compared to lower parental income households. A “re-launch” occurs when a young adult moves out, returns to the parental household, and then leaves again. “Understanding the makeup of those who return home could shed light on the timing of the release of what we know is quite a bit of pent-up demand,” said NAHB Chief Economist David Crowe. “The data may indicate that while this age group is delaying what we think of as typical milestones, the combination of resources and education and what we have found about their preferences suggest growing housing demand in the years ahead.”

Ninety percent of those born between 1980 and 1984 left home before the age of 27 – but then more than half returned to their parents’ homes. Of that group, those with a Bachelor’s degree or higher had the highest share of returning to the parental home at 55.5%. Meanwhile, those born between 1980 and 1984 with a high school degree had the lowest share returning to the parental home at 42.1%. When looking at parental income, the research reveals that parents in the top half of the income distribution experienced a higher occurrence of boomerang children than those in the bottom half. Another important difference is gender: Twelve percent of men in this age group never left the parental home, whereas 7.6% of women stayed. And although women are more likely to boomerang, they are also more likely to leave again. Studies continue to show that the desire to own a home remains strong for these Millennials. Despite data showing that the age group is delaying household formation, they remain a key demographic in the housing market, and the pent-up demand is expected to translate into housing growth in the coming years. For more information, please see the full analysis at http:// eyeonhousing.org/2015/02/nearly-half-of-young-millennials-boomerang/. n

he 2015 Home Show returned last month to the Nashville Fairgrounds and big crowds during a three-day weekend that had to contend with uncooperative weather during its opening day. However, strong attendance numbers on Saturday and Sunday made up for Friday’s slow start and exhibitors enjoyed robust, energetic crowds right up until the closing hour. “The 2015 Home Show has been a big success for us,” said Tracy Spencer from All-American Home Design. “We’ve gotten [lots] of leads and are already looking forward to next year’s show.” Attendees were delighted to find the usual vendors, products and educational seminars available at the Home Show, as well as a new feature: the “Parade of Pet Homes,” an area of custom-built pet homes created by HBAMT members. See page 12 of this issue for more! The 2016 Home Show is already signing up vendors for next year’s event scheduled for another three-day run in February. Call the HBAMT at (615) 377-1055 to request your 2016 Home Show registration form. Or visit the event’s page at www.hbamt.org for more information (coming soon). n

Home Show enjoys local media coverage With many households curled up indoors during the cold, wintry week leading up to the Home Show, the event was no doubt seen again and again on television and computer screens by a public hungry for weather updates and entertainment. Local coverage included an appearance by Home Show Chairman Lori Fisk-Conners on Channel 5â&#x20AC;&#x2122;s Talk of the Town with Meryll Rose (at right); Gina Hewlett from Louisville Tile on More at Midday on Channel 4 with Kacy Hagerty (lower left); and John Whitaker with Terry Bulger on-site with Channel 4â&#x20AC;&#x2122;s Terry Bulger (lower right). n

A “Parade of Pet Homes” with custom built houses constructed by HBAMT builders and architects were a big hit at this year’s Home Show. Visitors casted their ballots for their favorite creations and the “People’s Choice” winning house was given away to one lucky voter. The others were auctioned off to their highest bidder with the proceeds going to animal-related charities. n

The Miles Company “The Traditional”

The March, 2015 issue of The Nail, the official monthly publication of the Home Builders Association of Middle Tennessee (HBAMT).

The March, 2015 issue of The Nail, the official monthly publication of the Home Builders Association of Middle Tennessee (HBAMT).