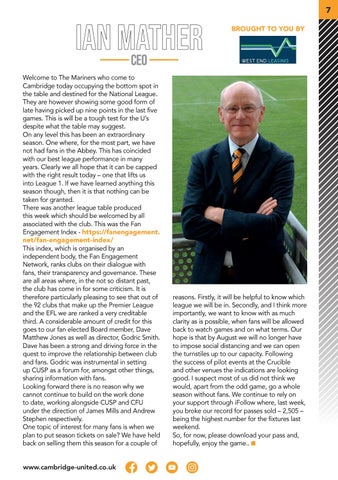 Ian————Mather CEO ———— Welcome to The Mariners who come to Cambridge today occupying the bottom spot in the table and destined for the National League. They are however showing some good form of late having picked up nine points in the last five games. This is will be a tough test for the U’s despite what the table may suggest. On any level this has been an extraordinary season. One where, for the most part, we have not had fans in the Abbey. This has coincided with our best league performance in many years. Clearly we all hope that it can be capped with the right result today – one that lifts us into League 1. If we have learned anything this season though, then it is that nothing can be taken for granted. There was another league table produced this week which should be welcomed by all associated with the club. This was the Fan Engagement Index - https://fanengagement. net/fan-engagement-index/ This index, which is organised by an independent body, the Fan Engagement Network, ranks clubs on their dialogue with fans, their transparency and governance. These are all areas where, in the not so distant past, the club has come in for some criticism. It is therefore particularly pleasing to see that out of the 92 clubs that make up the Premier League and the EFL we are ranked a very creditable third. A considerable amount of credit for this goes to our fan elected Board member, Dave Matthew Jones as well as director, Godric Smith. Dave has been a strong and driving force in the quest to improve the relationship between club and fans. Godric was instrumental in setting up CUSP as a forum for, amongst other things, sharing information with fans. Looking forward there is no reason why we cannot continue to build on the work done to date, working alongside CUSP and CFU under the direction of James Mills and Andrew Stephen respectively. One topic of interest for many fans is when we plan to put season tickets on sale? We have held back on selling them this season for a couple of www.cambridge-united.co.uk

BROUGHT TO YOU BY

reasons. Firstly, it will be helpful to know which league we will be in. Secondly, and I think more importantly, we want to know with as much clarity as is possible, when fans will be allowed back to watch games and on what terms. Our hope is that by August we will no longer have to impose social distancing and we can open the turnstiles up to our capacity. Following the success of pilot events at the Crucible and other venues the indications are looking good. I suspect most of us did not think we would, apart from the odd game, go a whole season without fans. We continue to rely on your support through iFollow where, last week, you broke our record for passes sold – 2,505 – being the highest number for the fixtures last weekend. So, for now, please download your pass and, hopefully, enjoy the game.. ■ 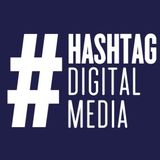