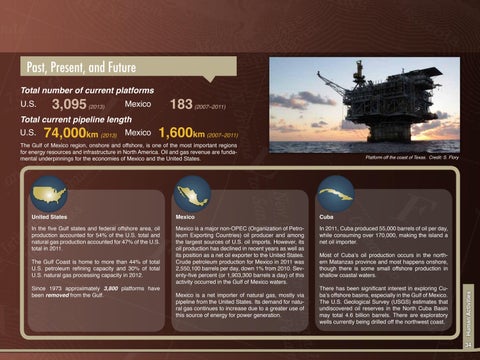 Past, Present, and Future U.S.

The Gulf of Mexico region, onshore and offshore, is one of the most important regions for energy resources and infrastructure in North America. Oil and gas revenue are fundamental underpinnings for the economies of Mexico and the United States.

Platform off the coast of Texas. Credit: S. Flory.

Mexico is a major non-OPEC (Organization of Petroleum Exporting Countries) oil producer and among the largest sources of U.S. oil imports. However, its oil production has declined in recent years as well as its position as a net oil exporter to the United States. Crude petroleum production for Mexico in 2011 was 2,550,100 barrels per day, down 1% from 2010. Seventy-five percent (or 1,903,300 barrels a day) of this activity occurred in the Gulf of Mexico waters. Mexico is a net importer of natural gas, mostly via pipeline from the United States. Its demand for natural gas continues to increase due to a greater use of this source of energy for power generation.

Cuba Cuba In 2011, Cuba produced 55,000 barrels of oil per day, while consuming over 170,000, making the island a net oil importer. Most of Cuba’s oil production occurs in the northern Matanzas province and most happens onshore, though there is some small offshore production in shallow coastal waters. There has been significant interest in exploring Cuba’s offshore basins, especially in the Gulf of Mexico. The U.S. Geological Survey (USGS) estimates that undiscovered oil reserves in the North Cuba Basin may total 4.6 billion barrels. There are exploratory wells currently being drilled off the northwest coast. 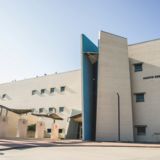