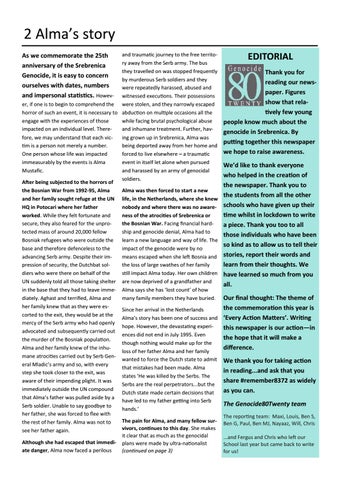 2 Alma’s story and traumatic journey to the free territory away from the Serb army. The bus they travelled on was stopped frequently by murderous Serb soldiers and they were repeatedly harassed, abused and witnessed executions. Their possessions er, if one is to begin to comprehend the were stolen, and they narrowly escaped horror of such an event, it is necessary to abduction on multiple occasions all the engage with the experiences of those while facing brutal psychological abuse impacted on an individual level. Thereand inhumane treatment. Further, havfore, we may understand that each vicing grown up in Srebrenica, Alma was tim is a person not merely a number. being deported away from her home and One person whose life was impacted forced to live elsewhere – a traumatic immeasurably by the events is Alma event in itself let alone when pursued Mustafic. and harassed by an army of genocidal soldiers. After being subjected to the horrors of the Bosnian War from 1992-95, Alma Alma was then forced to start a new and her family sought refuge at the UN life, in the Netherlands, where she knew HQ in Potocari where her father nobody and where there was no awareworked. While they felt fortunate and ness of the atrocities of Srebrenica or secure, they also feared for the unprothe Bosnian War. Facing financial hardtected mass of around 20,000 fellow ship and genocide denial, Alma had to Bosniak refugees who were outside the learn a new language and way of life. The base and therefore defenceless to the impact of the genocide were by no advancing Serb army. Despite their immeans escaped when she left Bosnia and pression of security, the Dutchbat solthe loss of large swathes of her family diers who were there on behalf of the still impact Alma today. Her own children UN suddenly told all those taking shelter are now deprived of a grandfather and in the base that they had to leave imme- Alma says she has ‘lost count’ of how diately. Aghast and terrified, Alma and many family members they have buried. her family knew that as they were esSince her arrival in the Netherlands corted to the exit, they would be at the Alma’s story has been one of success and mercy of the Serb army who had openly hope. However, the devastating experiadvocated and subsequently carried out ences did not end in July 1995. Even the murder of the Bosniak population. though nothing would make up for the Alma and her family knew of the inhuloss of her father Alma and her family mane atrocities carried out by Serb Genwanted to force the Dutch state to admit eral Mladic’s army and so, with every that mistakes had been made. Alma step she took closer to the exit, was states ’He was killed by the Serbs. The aware of their impending plight. It was Serbs are the real perpetrators...but the immediately outside the UN compound Dutch state made certain decisions that that Alma’s father was pulled aside by a have led to my father getting into Serb Serb soldier. Unable to say goodbye to hands.’ her father, she was forced to flee with The pain for Alma, and many fellow surthe rest of her family. Alma was not to vivors, continues to this day. She makes see her father again. it clear that as much as the genocidal Although she had escaped that immedi- plans were made by ultra-nationalist ate danger, Alma now faced a perilous (continued on page 3)

As we commemorate the 25th anniversary of the Srebrenica Genocide, it is easy to concern ourselves with dates, numbers and impersonal statistics. Howev-

EDITORIAL Thank you for reading our newspaper. Figures show that relatively few young people know much about the genocide in Srebrenica. By putting together this newspaper we hope to raise awareness. We’d like to thank everyone who helped in the creation of the newspaper. Thank you to the students from all the other schools who have given up their time whilst in lockdown to write a piece. Thank you too to all those individuals who have been so kind as to allow us to tell their stories, report their words and learn from their thoughts. We have learned so much from you all. Our final thought: The theme of the commemoration this year is ‘Every Action Matters’. Writing this newspaper is our action—in the hope that it will make a difference. We thank you for taking action in reading...and ask that you share #remember8372 as widely as you can. The Genocide80Twenty team The reporting team: Maxi, Louis, Ben S, Ben G, Paul, Ben MJ, Nayaaz, Will, Chris ...and Fergus and Chris who left our School last year but came back to write for us! 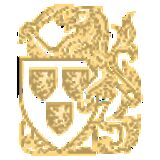