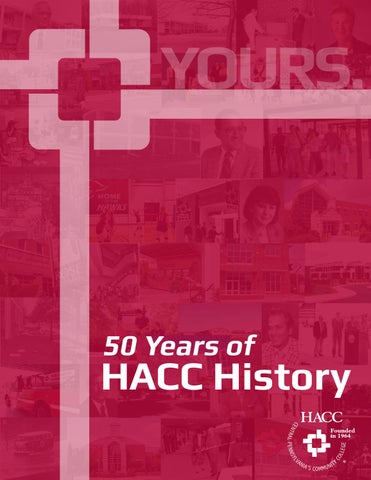 Dear HACC Community, If the founders of Harrisburg Area Community College (HACC) could be with us today, there is much they would not recognize in the school they started 50 years ago as Pennsylvania’s first community college. But they would be certain to recognize our vision and mission: Vision Statement HACC will be the first choice for a quality and accessible higher education opportunity. Mission Statement Creating opportunities and transforming lives to shape the future - TOGETHER.

HACC began as a dream of members of the Harrisburg School District Board of Directors, including Harrisburg attorneys Bruce E. Cooper and James W. Evans. Their hard work in marshaling funding support from school districts across Dauphin, Cumberland and Perry counties brought that dream to life in 1964 when the College held its first classes – for 426 students.

Trustees Cooper and Evans and their colleagues, along with HACC’s first president, Clyde E. Blocker, knew that accessible, affordable education was the best means of preparing the area’s residents to work at family-sustaining jobs and to become productive, contributing members of their communities. They also recognized education as the best solution for overcoming the persistent social ills of functional illiteracy and generational poverty. HACC would become the “opportunity school,” in the words of Trustee Paul R. Beers. Writing the College’s history for its 25th anniversary in 1989, he accurately predicted that HACC would grow to serve a population far beyond the boroughs and townships surrounding Harrisburg. Today, with 51,548 degrees awarded, five campuses and a thriving virtual learning enterprise, HACC, Central Pennsylvania’s Community College, continues to be the “opportunity school” that can best prepare our region’s students for the future and provide a skilled and educated workforce for business and industry. Trustee Beers also was prescient in identifying the great challenge we now face: how to continue to provide opportunity for students at a time of dwindling financial support from our 22 sponsoring school districts and the commonwealth. It is a challenge we will continue to meet with creativity, hard work and, at times, with sacrifice, but always with a commitment to educational access and excellence. Although we cannot know what the next 50 years will bring, if history is any guide, we know that the values underlying HACC’s vision and mission will not change. As we celebrate the good work that has gone before, let us also celebrate the knowledge that the good work we do today is not only for today. It builds the foundation on which HACC will continue to do what we do best: change the lives of our students and enrich the communities we serve. Sincerely,

Explore this pictorial history of HACC and learn how the College has evolved over the last 50 years as a dynamic partner meeting the educational needs of our communities.

On Feb. 14, Harrisburg Area Community College becomes the first community college in Pennsylvania when it opens in the former Harrisburg Academy on Second Street. Shortly after opening, the College enrolls 426 students and offers 16 programs for the fall semester. On April 4, HACC merges with Hershey Junior College. 3

The first Student Government Association (SGA) convenes. Its presidents will include students who move on to serve as HACC trustees, elected officials and other prominent community members, including Peter Wambach, SGA president in 1967, and now a member of the HACC Board of Trustees.

In March, the College purchases a 157-acre landfill in Wildwood Park from the City of Harrisburg for $1.

On April 16, ground is broken for a $3.5 million project to create the Wildwood Campus. This is now designated as the Harrisburg Campus.

Harrisburg Area Community College is the first Pennsylvania community college to be accredited by the Middle States Association of Colleges and Schools.

The buildings now known as McCormick Library, Blocker Hall and Stabler Hall are completed and the College moves to the Wildwood Campus (Harrisburg Campus).

Whitaker Hall, formerly South Hall, opens and is dedicated in honor of Uncas Aeneas and Helen Whitaker by the Whitaker Foundation, one of the Collegeâ&#x20AC;&#x2122;s benefactors.

1969: The College opens the associate degree nursing program with 28 students.

In honor of HACCâ&#x20AC;&#x2122;s 10th birthday celebration, the Rose Lehrman Arts Center at the Wildwood Campus (Harrisburg Campus) is dedicated, establishing cultural programs for the College and community. Early performers include prominent jazz musicians of the day, Dave Brubeck and Sons and Woody Herman and the Young Thundering Herd.

On Oct. 7, James A. Odom Jr., D.A., one of HACC’s first teaching faculty presidents, is inaugurated as the third president of Harrisburg Area Community College. Prior to being named president, Odom was coordinator of admissions and records and an assistant professor of language arts.

On July 1, Kenneth B. Woodbury Jr., Ed.D. begins his tenure as the fourth president of Harrisburg Area Community College.

The Helen Y. Swope Carillon Clock is erected at the Wildwood Campus (Harrisburg Campus) in honor of one of HACCâ&#x20AC;&#x2122;s founding trustees and its long-time board secretary. Swope also is one of the founders of the Pennsylvania Federation of Community College Trustees, a state advocacy organization which now works with the Pennsylvania Commission for Community Colleges.

HACC offers courses to more than 200 students in the basement of the Gettysburg Area School Administration Building. Then, it relocates to the Gettysburg Borough Fire Hall in 1990.

Students outside of HACCâ&#x20AC;&#x2122;s Lancaster Center

In May, the Lancaster Center is recognized as Lancaster Campus by the Pennsylvania Department of Education.

In August, HACC opens the doors for residents of Lebanon to take classes close to home. However, the building is destroyed by a fire three months later. Efforts to rebuild begin immediately.

Lebanon Campus students move from class to class through its lobby.

In 2012, the campus completes a renovation to its first floor.

In March, HACC hosts its first “Celebration of Community” at the Scottish Rite Cathedral. The event lived on to host speakers including Maya Angelou (1995), Rita Moreno (1996), Ramsey Lewis (1997) and Mary Wilson of the Supremes (1998).

1994: HACC continues to grow, marking its 30th anniversary with a fall enrollment of 10,385 students.

The Gettysburg Center moves to new expanded facilities in the old Ames store in the North Gettysburg Shopping Center along Old Harrisburg Road. With 457 students enrolled, it’s designated by the Pennsylvania Department of Education as the Gettysburg Campus.

On March 7, Edna V. Baehre, Ph.D., is inaugurated as the sixth president of HACC and oversees the College during a decade of rapid enrollment growth.

The Rose Lehrman Arts Center marks its 25th anniversary with a performance by the Martha Graham Dance Company.

The Community Center for Technology and Arts (now known as Midtown 1) opens at Fourth and Reily streets in Harrisburg.

Welding and machining programs are housed in Midtown 1, which is currently one of the two buildings of the Midtown Trade and Technology Center.

The Lancaster Campus moves to its current site on Old Philadelphia Pike in East Lampeter Township with 1,603 students enrolled in credit courses.

Main building of the Lancaster Campus

Penn Center in Harrisburg (formerly Polyclinic Hospital) opens and temporarily houses the College’s nursing and allied health programs. Later, many of the College’s administrative services are housed at Penn Center.

Students in the first nursing class at the Gettysburg Campus

The College extends its successful distance learning program to include videos and use of the Internet.

The York Center is recognized as a campus by the Pennsylvania Department of Education with a total fall enrollment of 1,831 students.

HACC opens the Midtown 2 site, which is part of the Midtown Trade and Technology Center. Formerly, it was the Evangelical Press Building, located at Third and Reily streets in Harrisburg. Midtown 2 houses several technology and trade programs, including engineering, building construction technology, and heating, ventilation and air conditioning (HVAC).

HACC houses administrative services, including the Office of the President, at Campus Square in Harrisburg’s Midtown.

On Oct. 21, John J. “Ski” Sygielski, Ed.D., is inaugurated as the seventh president of HACC. Dr. Ski subsequently oversees renovations to the Ted Lick Administration Building and Sen. John J. Shumaker Public Safety Center, reorganization of the College and purchase of the properties of the Lancaster and York campuses.

According to Community College Week’s annual analysis of United States Department of Education data, HACC ranks 60th in the nation in the number of associate degrees awarded.

HACC celebrates a significant milestone – 50 years of education. Events such as Dr. Ski’s Miles of Gratitude - Tour de HACC, ReDISCOVER HACC and the Golden Anniversary Gala are held across the campuses to engage the community, award scholarships, highlight HACC students and more.

The College announces four renowned individuals to serve as the honorary co-chairs for the 50th anniversary, including: Dorothy Byrne, an internationally acclaimed opera singer; Pedro Cortés, a former secretary of the commonwealth of Pennsylvania; Velma Redmond, vice president, general counsel and secretary of Pennsylvania American Water; and Peter C. Wambach, retired Pennsylvania state representative, to support the College in its efforts to recognize the significant milestone through public events, fundraising and more.

HACC launches a new brand, YOURS., to increase awareness of the oldest community college and engage prospective students.

As we celebrate the 50th anniversary of HACC, Central Pennsylvania’s Community College, with special events and activities during 2014, I want to share reflections on my association with the Commonwealth’s first and largest community college. Over the past 20 years, I have had the pleasure of building strong relationships with students, alumni, faculty, staff and administration. The benefits I have received during this time are far greater than anything I could have ever imagined.

HACC students continue to inspire me with their dreams, ambitions and unique perspective. I feel fortunate to be able to see students grow during their educational journey and hear their many stories about the opportunities they have received through their HACC experience. My most gratifying moments are when I see them at graduation, filled with a sense of accomplishment and full of possibilities. Our highly educated, skilled employees continue to impress me with their hard work in all areas of the College and their dedication to meeting the ever-changing needs of our students and the community. HACC employees combine the benefits of rapidly evolving modern technology and traditional face-to-face interaction for educational experiences that define HACC as a leader among its peers. As chair of the HACC Board of Trustees, I am proud to serve this dynamic institution. I look forward to the influence our graduates will continue to have over the next 50 years as we create opportunities and transform lives to shape the future – TOGETHER. Best wishes, 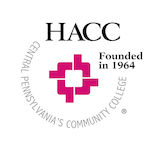