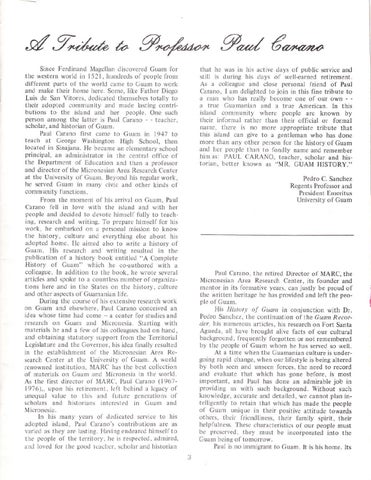 Since Ferdinand Magellan discoveredGuam for the westernworld in 1521, hundredsof peoplefrom different parts of the world came to Guam to work and make their home here. Some, like Father Diego Luis de San Vitores, dedicatedthemselvestotally to their adopted community and made lasting contributions to the island and her people. One such person among the latter is Paul Carano - - teacher, scholar,and historian of Guam. Paul Carano first came to Guam in 1941 to teach at George Washington High School, then located in Sinajana.He becamean elementaryschool principal, an administrator in the central office of the Department of Education and then a professor and director of the MicronesianArea ResearchCenter at the University of Guam. Beyond his regularwork, he served Guam in many civic and other kinds of community functions. From the moment of his arrival on Guam, Paul Carano fell in love with the isiand and with her people and deciderd to devotehimself fully to teaching, researchand writing. To preparehimself for his work, he embarked on a personalmission to know the history, culture and everything else about his adopted home. He aimed also to write a history of Guam. His research and writing resulted jn the publication of a history book entitled &quot;A Complete History of Guam&quot; which he co-authored with a colleague.In addition to the book, he wrote several articlesand spoke to a countlessnumber of organizations here and in the States on the history, culture and other aspectsof Guamanianlife. During the courseof his extensiveresearchwork on Guam and elsewhere,Paul Carano conceivedan idea whose time had come -- a center for studiesand researchon Guam and Micronesia.Starting with materialshe and a few of his colleagues had on hand, and obtaining statutory support from the Territorial Legislatureand the Governor,his idea finally resulted in the establishmentof the MicronesianArea Research Center at the University of Guam. A world renownedinstitution, MARC has the best collection of rnaterialson Guam and Micronesiain the world. As the first director of MARC, Paul Caratro(19611916)., upon his retirement,left behind a legacyof unequal value to this ancl f uture generationsof scholars and historians interested in Guam and Micronesia. In his many years of dedicateclservice to his adopted island, Paul Carano&#39;scontributionsare as varied as they are lasting.Havingendearedhimself to the people of the territory, he is respected,adrnired, and loved fbr the good te:acher, historian scholarar-rd

that he was in his active days of public serviceand still is during his days of well-earned retirement. As a colleague and close personal friend of Paul Carano, I am delighted to join in this fine tribute to a man who has really become one of our own - a true Guamanian and a true American. In this island community where people are known by their informal rather than their official or formal name, there is no more appropriate tribute that this island can give to a gentleman who has done more than any other person for the history of Guam and her people than to fondly name and remember himas: PAUL CARANO, teacher, scholar and historian, better known as &quot;MR. GUAM HISTORY.&quot; Pedro C. Sanchez RegentsProfessorand PresidentEmeritus University of Guam

Paul Carano,the retired Director of MARC, the Micronesian Area ResearchCenter, its founder and mentor in its formative years,can justly be proud of the written heritagehe has providedand left the people of Guam. Hts History of Guam in conjunction with Dr. Pedro Sanchez,the continuation of the GuamRecorder, his numerousarticles,his researchon Fort Santa Agueda, all have brought alive facts of our cultural background,frequently forgotten or not remembered by the people of Guam whom he has servedso well. At a time when the Guamanianculture is undergoing rapid change,when our lifestyle is being altered by both seen and unseen forces,the need to record and evaluate that which has gone before, is most irnportant, and Paul has done an admirablejob in providing us with such background. Without such knowledge,accurateand detailed, we cannot plan intelligently to retain that which has made the people of Guam unique in their positive attitude towards others, their friendliness,their family spirit, their helpfulness.Thesecharacteristicsof our people must be preserved,they must be incorporatedinto the Guam being of tomorrow. Paul is no immigrant to Guarn. It is his home. Its

Guam Recorder was published by the Micronesian Arear Research Center (MARC) of the University of Guam. The magazine contains items pertaining to Guam and Micronesia.