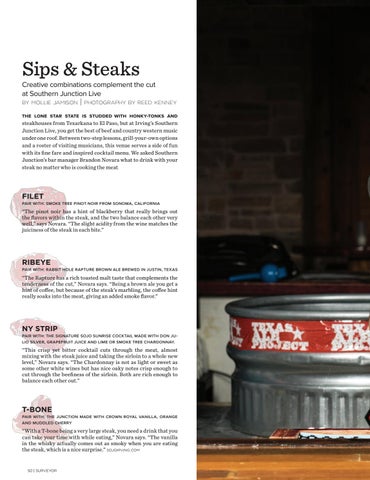 Creative combinations complement the cut at Southern Junction Live by mollie jamison | photography by reed kenney the lone star state is studded with honky-tonks and steakhouses from Texarkana to El Paso, but at Irving’s Southern Junction Live, you get the best of beef and country western music under one roof. Between two-step lessons, grill-your-own options and a roster of visiting musicians, this venue serves a side of fun with its fine fare and inspired cocktail menu. We asked Southern Junction’s bar manager Brandon Novara what to drink with your steak no matter who is cooking the meat .

“The pinot noir has a hint of blackberry that really brings out the flavors within the steak, and the two balance each other very well,” says Novara. “The slight acidity from the wine matches the juiciness of the steak in each bite.”

“The Rapture has a rich toasted malt taste that complements the tenderness of the cut,” Novara says. “Being a brown ale you get a hint of coffee, but because of the steak’s marbling, the coffee hint really soaks into the meat, giving an added smoke flavor.”

pair with: the signature sojo sunrise cocktail made with don julio silver, grapefruit juice and lime or smoke tree chardonnay.

“This crisp yet bitter cocktail cuts through the meat, almost mixing with the steak juice and taking the sirloin to a whole new level,” Novara says. “The Chardonnay is not as light or sweet as some other white wines but has nice oaky notes crisp enough to cut through the beefiness of the sirloin. Both are rich enough to balance each other out.”

pair with: the junction made with crown royal vanilla, orange and muddled cherry

“With a T-bone being a very large steak, you need a drink that you can take your time with while eating,” Novara says. “The vanilla in the whisky actually comes out as smoky when you are eating the steak, which is a nice surprise.” sojoirving .com Presented by the Irving Convention and Visitors Bureau

Presented by the Irving Convention and Visitors Bureau