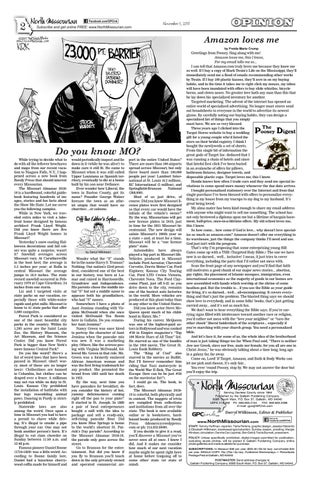 Do you know MO? While trying to decide what to do with all the leftover brochures and maps from our recent vacation to Niagara Falls, N.Y., I happened across a new book from Reedy Press that should interest every Missourian. The Missouri Almanac 201819 is a hardbound, colorful guidebook featuring hundreds of images, stories and fun facts about the Show Me State. Let me serve you the following samples. While in New York, we traveled extra miles to visit a lakefront home designed by famous architect Frank Lloyd Wright. Did you know there are five Frank Lloyd Wright homes in Missouri? Yesterday’s snow coating Halloween decorations and fall colors was quite a surprise, wasn’t it? Snowfall averages across Missouri vary. At Caruthersville in the boot heel, the average is 2.3 inches per year; at Rolla in central Missouri the average jumps to 18.9 inches. The state record snowfall occurred in February 1979 at Cape Girardeau: 24 inches from one storm. Liz and I targeted visits at state parks on our vacation, especially those with white-water rapids and grist mills. Missouri is home to 41 state parks that offer 3,600 campsites. Forest Park is considered as one of the most beautiful city parks in the country. Within its 1,293 acres are the Saint Louis Zoo, the History Museum, the Art Museum, and the Science Center. Did you know Forest Park is bigger than New York’s more famous Central Park? Do you like weird? Here’s a list of weird laws that have been passed in Missouri (don’t worry, most of these are no longer laws): Clotheslines are banned in Columbia, but clothes can be draped over a fence. A milkman may not run while on duty in St. Louis. Kansas City prohibited the installation of bathtubs with four legs resembling animal paws. Dancing in Purdy is strictly prohibited. Statewide laws are also among the weird. Once upon a time in Missouri you had to have a permit to shave while driving. It’s illegal to smoke a pipe through your ear. One may not honk another person’s horn. It’s illegal to eat clam chowder on Sunday between 11:50 a.m. and 12:48 p.m. Famous pioneer Daniel Boone (1734-1820) was a little weird. According to Boone family lore, Daniel had a luxurious cherrywood coffin made for himself and

would periodically inspect and lie down in it (while he was alive!) to make sure it still fit. He came to Missouri when it was still called Upper Louisiana as Spanish territory, eventually to die at a home built by his son near Defiance. Ever wonder how Liberal, the town in Barton County, got its name? Founder George Walser foresaw the town as an atheist utopia that would have no churches ...or saloons.

Wonder what the “S” stands for in the name Harry S. Truman? Nothing. Our nation’s 33rd president, considered one of the best in our history, was born at Lamar and raised in Harrisonville, Grandview and Independence. His parents chose the middle initial “S” but not a middle name to appease both his grandfathers, who had “S” names. Somewhere I have a photo of Aunt Jemima standing with Virginia McDonald when she once visited McDonald Tea Room here in Gallatin. Do you remember Aunt Jemima? Nancy Green was once hired to portray the character of Aunt Jemima when the pancake mix was new. It was a marketing ploy. Others, like the actress posing with Virginia McDonald, followed Ms. Green in that role. Ms. Green was a formerly enslaved African American woman and was the first living trademark for any product. She promoted the brand from 1893 until her death in 1923. By the way, next time you have pancakes for breakfast, do you consider the history of hot, yummy deliciousness coming right off the pan to your plate? It started in St. Joseph. In 1889 a pair of local entrepreneurs bought a mill with the idea to package and sell a ready-mix, self-rising pancake flour. Did you know Blue Springs is home to the world’s shortest St. Patrick’s Day parade? According to the Missouri Almanac 2018-19, the parade only goes across the street. Go to Branson for the entertainment. But did you know if you fly to Branson you’ll touch down in the only privately owned and operated commercial air-

port in the entire United States? There are more than 100 airports spread across Missouri, but only three board more than 100,000 people per year: Lambert International at St. Louis (6.2 million), KC International (5 million), and Springfield-Branson National (368,000). Most of us just drive, of course. Did you know Missouri license plates were first designed so that every car would have the initials of the vehicle’s owner? By the way, Missourians will get new license plates in 2019, just in time for the 2021 Missouri bicentennial. The new design will salute Missouri’s 200th year as a state – and, at least for a time, Missouri will be a “one license plate” state. Automobiles have always played a big part in Missouri life. Vehicles produced in Missouri include Ford Aerostar, Chevrolet Corvette, Dorris Motor Car, Ford Explorer, Kansas City Touring Car, Ford LTD Crown Victoria, Chevrolet Nova. The Ford Claycomo Plant, just off I-35 as you drive down to the city, remains one of the busiest auto factories in the world. More vehicles are produced at this plant today than in any other in the United States. Did you know actor Steve McQueen spent much of his childhood in Slater, Mo.? During his career, McQueen was one of the highest-paid actors in Hollywood and was ranked #30 in Empire magazine’s “Top 100 Movie Stars of All Time” list. He starred as one of the bandits in the 1959 movie, The Great St. Louis Bank Robbery. The “King of Cool” also starred in the movies as Bullitt. But I’ll forever remember him riding that Nazi motorcycle in the World War II flick, The Great Escape (how can he be just #30 on the moviestar list?). I could go on. The book, in fact, does. The Missouri Almanac 201819 is colorful, both physically and in content. The nuggets of trivia are compiled from collections and institutions from all over the state. The book is now available online or in bookstores, hardbound books produced by Reedy Press (ldemers@reedypress. com or ph: 314.833.6600). If you decide to give it a read, you’ll discover a Missouri you’ve never seen all at once. I know I did. And it makes me consider how much of our next vacation maybe might be spent right here at home before traipsing off to some other state (or state of mind).

Greetings from Poosey. Sing along with me! Amazon loves me, this I know, For my email tells me so... I can tell that Amazon.com truly loves me because they know me so well. If I buy a copy of Mark Twain’s Life on the Mississippi, they’ll immediately send me a flood of emails recommending other works by Twain. If I buy 100 plastic kazoos, they’ll zero in on my buying habits, and in the time it takes me to right click my mouse, my inbox will have been inundated with offers to buy slide whistles, bicycle horns, and clown noses. No greater love hath any man than this that he lay down his specialized inventory for another. Targeted marketing. The advent of the internet has opened an entire world of specialized advertising. No longer must stores send out broadsheets to everyone in the world to advertise its newest gizmo. By carefully noting our buying habits, they can design a specialized list of things that you simply must have. We are so very blessed. Three years ago I clicked into the Target Stores website to buy a wedding gift for a young couple who’d listed the store on their bridal registry. I think I bought the newlyweds a set of sheets. From this single bit of information the great gods of Target Inc. deduced that I was running a chain of hotels and since that fateful first click I’ve been buried in an avalanche of offers for pillows, bathroom fixtures, designer towels, and disposable plastic cups. Target loves me, this I know. Honda knows how often I trade cars and they send me special invitations to come spend more money whenever the due date arrives. I bought personalized stationery over the Internet and from that single purchase I’ve been blessed with offers to personalize everything in my house from my teacups to my dog to my husband. It’s great being loved. My alma mater has been kind enough to share my email address with anyone who might want to sell me something. The school has not only bestowed a diploma upon me but a lifetime of bargain basement, half-price, once-in-a-lifetime offers. My old school loves me, this I know. So how come... how come if God is love... why doesn’t love specialize as much as amazon.com? Amazon doesn’t offer me everything in its warehouse, just the things the company thinks I’ll need and use. God just isn’t with the program. That’s why I’m proposing that some enterprising young Bill Gates come up with a THB (Targeted Holy Bible.) The one we have now is so darned... well... inclusive! I mean, it just tries to cover everything, including the parts that I’d rather not mess with. Scan the front page of any newspaper and you’ll find that faith still motivates a good chunk of our major news stories... abortion, gay rights, the placement of Islamic mosques, immigration, even international economics as the majority of goods in our homes are now assembled with hands which worship at the shrine of some heathen god. But the trouble is... if you use the Bible as your guide for living, it’s so darned... well... all-encompassing. It covers everything and that’s just the problem. The blasted thing says we should show love to everybody, and in some folks’ books, that’s just getting carried away... and it’s not as much fun. We don’t want to hear everything the Bible says. If you’re carrying signs filled with intolerance toward another race or religion, you’d rather not mess with the “love your neighbor” or “turn the other cheek” liberal balderdash of the scriptures... especially if you’re marching with your church group. You need a personalized bible. And let’s face it, for some of us, the whole idea of the brotherhood of man is just taking things too far. When Paul said, “There is neither Jew nor Greek, slave nor free, male nor female, for you all are one in Christ Jesus,” he was obviously talking about a time long, long ago in a galaxy far, far away. Come on, Lord! If Target, Amazon, and Bath & Body Works can let me pick and choose, it’s only fair... You ever ‘round Poosey, stop by. We may not answer the door but you’ll enjoy the trip. 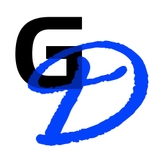