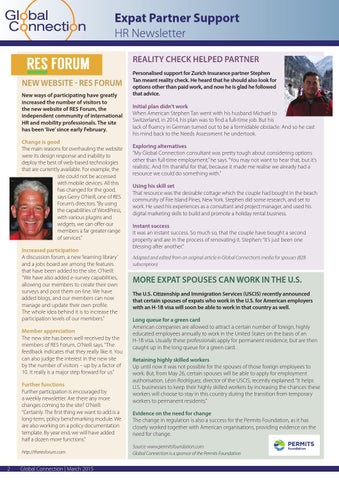 Expat Partner Support HR Newsletter REALITY CHECK HELPED PARTNER NEW WEBSITE - RES FORUM New ways of participating have greatly increased the number of visitors to the new website of RES Forum, the independent community of international HR and mobility professionals. The site has been ‘live’ since early February. Change is good The main reasons for overhauling the website were its design response and inability to deploy the best of web-based technologies that are currently available. For example, the site could not be accessed with mobile devices. All this has changed for the good, says Gerry O’Neill, one of RES Forum’s directors. “By using the capabilities of WordPress, with various plugins and widgets, we can offer our members a far greater range of services.” Increased participation A discussion forum, a new ‘learning library’ and a jobs board are among the features that have been added to the site. O’Neill: “We have also added e-survey capabilities, allowing our members to create their own surveys and post them on-line. We have added blogs, and our members can now manage and update their own profile. The whole idea behind it is to increase the participation levels of our members.” Member appreciation The new site has been well-received by the members of RES Forum, O’Neill says. “The feedback indicates that they really like it. You can also judge the interest in the new site by the number of visitors – up by a factor of 10. It really is a major step forward for us.” Further functions Further participation is encouraged by a weekly newsletter. Are there any more changes coming to the site? O’Neill: “Certainly. The first thing we want to add is a long-term, policy benchmarking module. We are also working on a policy documentation template. By year end, we will have added half a dozen more functions.” http://theresforum.com

Personalised support for Zurich Insurance partner Stephen Tan meant reality check. He heard that he should also look for options other than paid work, and now he is glad he followed that advice. Initial plan didn’t work When American Stephen Tan went with his husband Michael to Switzerland, in 2014, his plan was to find a full-time job. But his lack of fluency in German turned out to be a formidable obstacle. And so he cast his mind back to the Needs Assessment he undertook. Exploring alternatives “My Global Connection consultant was pretty tough about considering options other than full-time employment,” he says. “You may not want to hear that, but it’s realistic. And I’m thankful for that, because it made me realise we already had a resource we could do something with.” Using his skill set That resource was the desirable cottage which the couple had bought in the beach community of Fire Island Pines, New York. Stephen did some research, and set to work. He used his experiences as a consultant and project manager, and used his digital marketing skills to build and promote a holiday rental business. Instant success It was an instant success. So much so, that the couple have bought a second property and are in the process of renovating it. Stephen: “It’s just been one blessing after another.” Adapted and edited from an original article in Global Connection’s media for spouses (B2B subscription)

MORE EXPAT SPOUSES CAN WORK IN THE U.S. The U.S. Citizenship and Immigration Services (USCIS) recently announced that certain spouses of expats who work in the U.S. for American employers with an H-1B visa will soon be able to work in that country as well. Long queue for a green card American companies are allowed to attract a certain number of foreign, highly educated employees annually to work in the United States on the basis of an H-1B visa. Usually these professionals apply for permanent residence, but are then caught up in the long queue for a green card. Retaining highly skilled workers Up until now it was not possible for the spouses of those foreign employees to work. But, from May 26, certain spouses will be able to apply for employment authorisation. Léon Rodríguez, director of the USCIS, recently explained: “It helps U.S. businesses to keep their highly skilled workers by increasing the chances these workers will choose to stay in this country during the transition from temporary workers to permanent residents.” Evidence on the need for change The change in regulation is also a success for the Permits Foundation, as it has closely worked together with American organisations, providing evidence on the need for change. Source: www.permitsfoundation.com Global Connection is a sponsor of the Permits Foundation 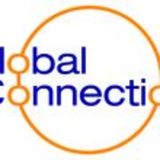