In the Mind of an Artist 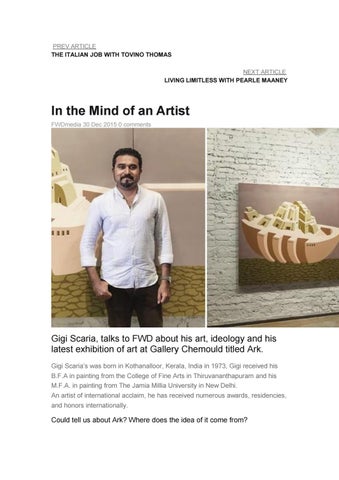 Gigi Scaria, talks to FWD about his art, ideology and his latest exhibition of art at Gallery Chemould titled Ark. Gigi Scariaâ&amp;#x20AC;&amp;#x2122;s was born in Kothanalloor, Kerala, India in 1973, Gigi received his B.F.A in painting from the College of Fine Arts in Thiruvananthapuram and his M.F.A. in painting from The Jamia Millia University in New Delhi. An artist of international acclaim, he has received numerous awards, residencies, and honors internationally.

Could tell us about Ark? Where does the idea of it come from?

The idea of Ark comes from the biblical story of Noah. A major idea that Ark contains is that of the annihilation of the world and a new beginning, there on. It talks about the entire humanity being wiped off from the face of the earth and only the memories being carried forward in an Ark. From the memories, one looks for a new beginning, trying to make it better than the past. In that sense, even the architectural element comes in as you conceive something new. Ark talks about a new civilization formed in a purely conceptual sense. Also, this is a story told by every civilization.

How long has the idea been there? How has it evolved from the biblical idea of the Ark?

It obviously comes from my childhood memories of the story that I read and heard. But the understanding that I have developed working on the urban structure and socio -political dynamics, gives it a new light. In Ark, I have a set of graphite drawings, paintings, and videos, where the videos are actually the extension of paintings. I created my paintings and then animated videos of similar kind of imagery, making it seem like an extension. So, in many ways I am juxtaposing the old idea of the Ark with the contemporary. Today we are facing the brunt of issues right from wars and destruction to an impending environmental catastrophe. I think this brings back the Ark into relevance. If you remember, the seed bank in Norway was opened during the Syrian refugee crisis. So you see, that Ark becomes an element of archiving

your memory, your culture. The Ark bears testimony to the fact that a civilization cannot function as an independent entity, it always has memories that humanity carries along.

You seem to enjoy working in a variety of mediums. How has this come about? Yes, I work with different mediums. Though I trained as a painter, I was equally interested in sculpting and cinema. Certain areas and certain thoughts can be expressed only in a certain medium. Though I have dwelled in different mediums, I do it simultaneously and not one medium at a time. It always depends on the subject and the idea that I am working on.

The Elevator is one work where you have used the medium of video to its limit, could you talk about this work? The elevator was exhibited in Venice Biennale in 2007, where it was part of the India Pavilion. The whole work, as the name suggests, is about an Elevator, with three battery projection. It is a real elevator that is illuminated by the battery projections. As the video starts moving, it gives you the feeling of being elevated. And as it moves, it gives you views of interiors of different households; the upperclass household, the middle class, and the downtrodden and as you reach the top, it gives you the view of an entire city. The core idea of The Elevator is the issue of class and hierarchy. Elevators are plainly about going up or coming down. An elevator never gives you the parallel view. I think that represents the perspective of modern economies, nations, and media, where numbers are all that matter. With The Elevator, I tried to incorporate a parallel view into an elevator.

How do you view class and hierarchy? Are you willing to accept it as an inevitable reality of our socioeconomic system? Conventionally, we have always looked at progress and development in terms of numbers. But the recent political developments give you a hint that this archaic idea is being questioned. People are increasingly becoming aware and emotionally connected, so undermining emotions is not something you can do anymore. The way I see it, leaders who just look at numbers, even with all their confidence and arrogance, are bound to fail.

How has Kerala influenced you? Kerala has not influenced but made me. It is Kerala that has helped me develop my perspective and intellectual understanding; it is from this space that I look at things elsewhere. Though I have not been living in Kerala, I have never been alienated from it. I was always a voracious reader of Malayalam literature while in Kerala and still continue to do so. I still have a fair idea about the new books coming up and so on.

As somebody who has lived in Kerala, how do you view traditions? What is your take on the glorification or demonization of it? All over India, tradition is such a big thing. It is something that we have to negotiate day in and day out and many a times, itâ&amp;#x20AC;&amp;#x2122;s a hindrance. It might be an

exotic thing for Westerners and the tourism industry but living with it is a different game altogether. The idiosyncrasies involved in keeping the traditions alive are a lot of troubles. When it comes to caste or religion, it has all got so complicated that we don’t know what tradition is, what religion is and what other ideological matters are, it is all fused into a Kichdi. And also there is the unrest caused by religious strife and extremism. If you ask me, I would probably say that all religions should be banned. If that cannot be accommodated then I shall advocate the path of Sufism, where when one can stay religious yet refrain from the extremism of any sort. TAGS : • •

In the Mind of an Artist