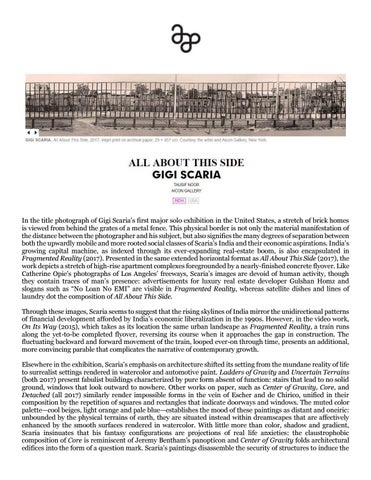 In the title photograph of Gigi Scaria’s first major solo exhibition in the United States, a stretch of brick homes is viewed from behind the grates of a metal fence. This physical border is not only the material manifestation of the distance between the photographer and his subject, but also signifies the many degrees of separation between both the upwardly mobile and more rooted social classes of Scaria’s India and their economic aspirations. India’s growing capital machine, as indexed through its ever-expanding real-estate boom, is also encapsulated in Fragmented Reality (2017). Presented in the same extended horizontal format as All About This Side (2017), the work depicts a stretch of high-rise apartment complexes foregrounded by a nearly-finished concrete flyover. Like Catherine Opie’s photographs of Los Angeles’ freeways, Scaria’s images are devoid of human activity, though they contain traces of man’s presence: advertisements for luxury real estate developer Gulshan Homz and slogans such as “No Loan No EMI” are visible in Fragmented Reality, whereas satellite dishes and lines of laundry dot the composition of All About This Side. Through these images, Scaria seems to suggest that the rising skylines of India mirror the unidirectional patterns of financial development afforded by India’s economic liberalization in the 1990s. However, in the video work, On Its Way (2015), which takes as its location the same urban landscape as Fragmented Reality, a train runs along the yet-to-be completed flyover, reversing its course when it approaches the gap in construction. The fluctuating backward and forward movement of the train, looped ever-on through time, presents an additional, more convincing parable that complicates the narrative of contemporary growth. Elsewhere in the exhibition, Scaria’s emphasis on architecture shifted its setting from the mundane reality of life to surrealist settings rendered in watercolor and automotive paint. Ladders of Gravity and Uncertain Terrains (both 2017) present fabulist buildings characterized by pure form absent of function: stairs that lead to no solid ground, windows that look outward to nowhere. Other works on paper, such as Center of Gravity, Core, and Detached (all 2017) similarly render impossible forms in the vein of Escher and de Chirico, unified in their composition by the repetition of squares and rectangles that indicate doorways and windows. The muted color palette—cool beiges, light orange and pale blue—establishes the mood of these paintings as distant and oneiric: unbounded by the physical terrains of earth, they are situated instead within dreamscapes that are affectively enhanced by the smooth surfaces rendered in watercolor. With little more than color, shadow and gradient, Scaria insinuates that his fantasy configurations are projections of real life anxieties: the claustrophobic composition of Core is reminiscent of Jeremy Bentham’s panopticon and Center of Gravity folds architectural edifices into the form of a question mark. Scaria’s paintings disassemble the security of structures to induce the

more generative potential of ambiguity: what can the mind make of forms without function, and of aesthetics without order?

These questions approach the abstract investigation of displacement that lies at the heart of Scaria’s work. As the press release for the exhibition states, “alienation and displacement” are of particular concern for Scaria, for whom these “intended and unintended consequences” are brought about by both urban development and the mental estrangement—the feeling of being part of a whole, but finding oneself lonely and alone—which defines modernity. Yet, as his watercolors, photographs, and video works show, the invasive spread of modernity is not bound by a linear progression of time or development. The feeling of displacement—its affective power and its pervasiveness—is induced by the recognition that one is merely situated against the backdrop of a world of shifting politics and economics, the complexity of which leaves one feeling unmoored. Trial (2017), an installation of 12 bronze human figures each in their own blue plastic witness stand, enunciates how such a feeling is at once collective and highly individualized. The figures stand independently, arms folded across their chest, looking outward. While their gazes are defiant, perhaps even confrontational, their purpose is circumspect: what imaginary do they look toward? Their outward stances suggests that the artist is concerned with matters of perspective and the antinomy of staking an epistemic position while simultaneously investigating the limits of said position. In this, as in other works, Gigi Scaria asks the viewer to shed the comfort of standing on solid footing and instead, place herself on less stable ground, in the hopes of finding new modes of navigation. Gigi Scaria’s “All About This Side” is on view at Aicon Gallery, New York, until September 23, 2017.