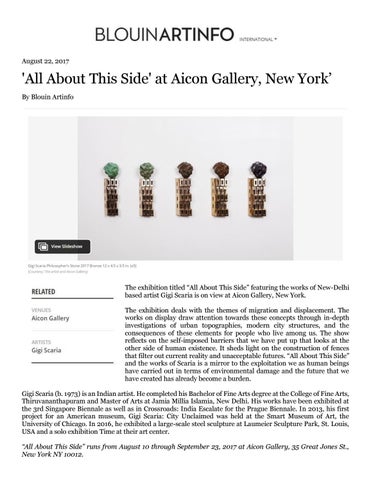 The exhibition titled “All About This Side” featuring the works of New-Delhi based artist Gigi Scaria is on view at Aicon Gallery, New York. The exhibition deals with the themes of migration and displacement. The works on display draw attention towards these concepts through in-depth investigations of urban topographies, modern city structures, and the consequences of these elements for people who live among us. The show reflects on the self-imposed barriers that we have put up that looks at the other side of human existence. It sheds light on the construction of fences that filter out current reality and unacceptable futures. “All About This Side” and the works of Scaria is a mirror to the exploitation we as human beings have carried out in terms of environmental damage and the future that we have created has already become a burden. Gigi Scaria (b. 1973) is an Indian artist. He completed his Bachelor of Fine Arts degree at the College of Fine Arts, Thiruvananthapuram and Master of Arts at Jamia Millia Islamia, New Delhi. His works have been exhibited at the 3rd Singapore Biennale as well as in Crossroads: India Escalate for the Prague Biennale. In 2013, his first project for an American museum, Gigi Scaria: City Unclaimed was held at the Smart Museum of Art, the University of Chicago. In 2016, he exhibited a large-scale steel sculpture at Laumeier Sculpture Park, St. Louis, USA and a solo exhibition Time at their art center. “All About This Side” runs from August 10 through September 23, 2017 at Aicon Gallery, 35 Great Jones St., New York NY 10012.