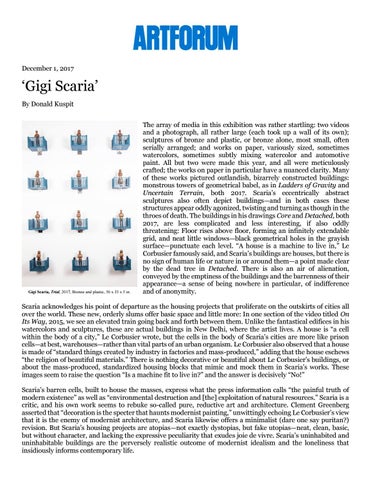 The array of media in this exhibition was rather startling: two videos and a photograph, all rather large (each took up a wall of its own); sculptures of bronze and plastic, or bronze alone, most small, often serially arranged; and works on paper, variously sized, sometimes watercolors, sometimes subtly mixing watercolor and automotive paint. All but two were made this year, and all were meticulously crafted; the works on paper in particular have a nuanced clarity. Many of these works pictured outlandish, bizarrely constructed buildings: monstrous towers of geometrical babel, as in Ladders of Gravity and Uncertain Terrain, both 2017. Scaria’s eccentrically abstract sculptures also often depict buildings—and in both cases these structures appear oddly agonized, twisting and turning as though in the throes of death. The buildings in his drawings Core and Detached, both 2017, are less complicated and less interesting, if also oddly threatening: Floor rises above floor, forming an infinitely extendable grid, and neat little windows—black geometrical holes in the grayish surface—punctuate each level. “A house is a machine to live in,” Le Corbusier famously said, and Scaria’s buildings are houses, but there is no sign of human life or nature in or around them—a point made clear by the dead tree in Detached. There is also an air of alienation, conveyed by the emptiness of the buildings and the barrenness of their appearance—a sense of being nowhere in particular, of indifference and of anonymity.

Scaria acknowledges his point of departure as the housing projects that proliferate on the outskirts of cities all over the world. These new, orderly slums offer basic space and little more: In one section of the video titled On Its Way, 2015, we see an elevated train going back and forth between them. Unlike the fantastical edifices in his watercolors and sculptures, these are actual buildings in New Delhi, where the artist lives. A house is “a cell within the body of a city,” Le Corbusier wrote, but the cells in the body of Scaria’s cities are more like prison cells—at best, warehouses—rather than vital parts of an urban organism. Le Corbusier also observed that a house is made of “standard things created by industry in factories and mass-produced,” adding that the house eschews “the religion of beautiful materials.” There is nothing decorative or beautiful about Le Corbusier’s buildings, or about the mass-produced, standardized housing blocks that mimic and mock them in Scaria’s works. These images seem to raise the question “Is a machine fit to live in?” and the answer is decisively “No!” Scaria’s barren cells, built to house the masses, express what the press information calls “the painful truth of modern existence” as well as “environmental destruction and [the] exploitation of natural resources.” Scaria is a critic, and his own work seems to rebuke so-called pure, reductive art and architecture. Clement Greenberg asserted that “decoration is the specter that haunts modernist painting,” unwittingly echoing Le Corbusier’s view that it is the enemy of modernist architecture, and Scaria likewise offers a minimalist (dare one say puritan?) revision. But Scaria’s housing projects are atopias—not exactly dystopias, but fake utopias—neat, clean, basic, but without character, and lacking the expressive peculiarity that exudes joie de vivre. Scaria’s uninhabited and uninhabitable buildings are the perversely realistic outcome of modernist idealism and the loneliness that insidiously informs contemporary life.

The bronze temple bell that encompasses—swallows—the plastic, modern buildings in the sculpture Scream, 2017, seems to sound an alarm. In Trial, also 2017, a work the artist says was inspired by Franz Kafka, the men and women who inhabit Scaria’s buildings stand on cell-like balconies similar to those attached to some highrise residences, awaiting judgment. Their arms are defiantly crossed. —Donald Kuspit