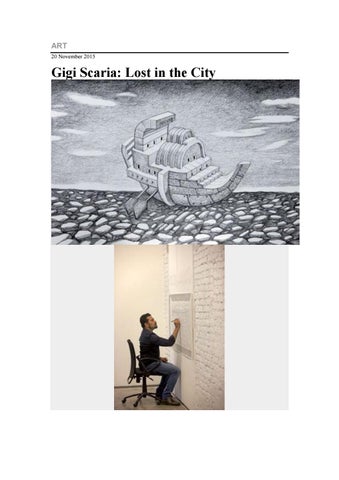 Gigi Scaria: Lost in the City

Our ideas about what’s home and what’s displacement are constantly evolving. They often confront us in different forms. In one form, there is the exodus of Syrian refugees, who have had to flee their home to escape the atrocities of a civil war. In another form of migration, many working class people shift from rural to urban areas in the hope of better lives. Within a city, migration happens to adjust with the rapid shape- shifting and urbanisation of the city. In his oeuvre so far, Delhi-based multi-disciplinary contemporary Indian artist Gigi Scaria has often explored the idea of migration and many of its facets. His current show ‘The Ark’, a mix of paintings and videos, at gallery Chemould Prescott Road in Mumbai, carries forward the theme seamlessly. ‘The Ark’ emerges from the poetic and mythical past—Noah’s Ark—but addresses the horrific migration and environmental situation of the present and leans towards a hopeful future. Noah’s Ark, of course, is a reference from the Genesis. Talking about his show, Scaria says, “The interesting part for me is that when you think about complete destruction and a new beginning, you always start to think about an architectural structure. Rebuilding is always a

part of destruction. Another interesting part is the form and measurements of the Ark itself. It was believed to be more in a boat form floating on the water, not really sailing or going anywhere. It was only a vessel to accommodate.” The work is a combination of drawings (graphite on archival board) and paintings (acrylic and automotive paint on canvas). Several of the paintings also have corresponding videos which animate the paintings and give them an added perspective. In the painting titled Voyage, for example, the stationary scroll that emanates from the top of the ship finds itself moving endlessly in the video that accompanies it. Shireen Gandhy, director, Chemould Prescott Road, highlights the topicality of the show by talking about the instant association it evokes with the Syrian political situation. “‘The Ark’ is about seeking refuge. The work also raises questions like whether the Ark is always a refuge. It also points towards an architectural calamity and our engagement with the environment.” To get any further context to ‘The Ark’ however, one needs to know more about Scaria’s life, his other works, and most importantly, his complicated relationship with Delhi. From a pretty charmed life in Kerala with parents who supported his artistic sensibilities right from childhood, Scaria moved to Delhi for further education after his BFA (Painting) from College of Fine Arts in Thiruvananthapuram. From the very beginning, Delhi enthralled Scaria in many different ways, and over the years, it occupied an important place in many of his works. “When I first moved to Delhi, I had to wait for almost a year before I could apply to any art college as the requisite timelines had passed,”

says Scaria. This phase involved briefly living at Lalit Kala Akademi’s dormitory, hanging out at Lalit Kala’s library, meeting like- minded people, working at a couple of art studios on illustration books. He then joined Jamia Millia Islamia for his MFA (Painting), where he had “two uninterrupted years of art practice.” After he graduated in 1998, he took up a job in a private school as an art teacher, mainly for sustenance, and worked there for about four years. The influence of his adopted home city and his experience as an outsider in it was building up all this time. The moment Scaria starts talking about Delhi, the passion in his voice rises to a whole new level. The city is fascinating and unique because of its structure, and that’s both an advantage and a hassle, he says. “It has this strong Middle Eastern influence and this sharp contrast in the climate. It’s difficult to personally connect with so many of those structures in Delhi. In a way, Delhi is disconnected with itself and India. Even the British couldn’t do much, as they didn’t feel at home here. They only concentrated on Delhi because it’s a power centre.” Having shifted 13 or 14 residences so far in Delhi, he has got the chance to observe many pockets of the city closely and each one exerted some sort of influence on him. “It’s not something you invent. It’s the way you look at it. I was quite fascinated by the different language groups in the city, and how social connectivity happens in different layers. You look at so many things in unique ways.” He points out things like the cycle rickshaw which was an unacceptable form of commuting for him, but he had to accept it as there was no other option. He also started observing the drainage system of the city. In small alleys, sometimes they would take out all the stuff, and

then it would go back into the system again. “One of the marks of civilisation in a city, as we were taught in school, is its drainage system. Much thought is put into that. But here there was no drainage plan anywhere. And I realised that what we are taught and what we see are different. There were contradictions and social and class hierarchies at so many levels which were exercised very blatantly in Delhi.” At Jamia itself, Scaria started working on maps inspired by Delhi. Slowly, as the city’s surroundings started infiltrating into his system, mapping evolved into looking at various places, connecting with roads and signs. The many notable developments or updates in the city’s infrastructure found their way into his work and kept adding layers of perspectives—be it the Delhi Metro system, illegal constructions, demolitions during the Commonwealth Games, or shopping malls. “Delhi is also the microcosm of the largely migrated India. You see the same things that are happening in Delhi being reflected wherever else you go. Things are happening everywhere simultaneously, thanks to the digital world. So that was another revelation.” These contradictions and hierarchies, and the relationship between the architecture and social changes form the nucleus of Scaria’s art. As cultural theorist and curator Ranjit Hoskote, who has known Scaria’s work, points out, “I have been fascinated by his engagement as a painter with the rapidity of urbanisation in India, and by his attention as a video artist to the nuances of displacement and attempted communication across social, cultural and ideological divides. ‘The Ark’ carries forward his concern with an embattled

ecology and the perilous logic of exploitation that has depleted the planet’s resources and called down environmental catastrophe.” This theme was seen in various other projects by Scaria, including Absence of an Architect in 2007 in Delhi, and then inAmusement Park in 2009 which was exhibited at Chemould in 2009. These works emphasised the constantly changing nature of a city and the attempts of outsiders to fit in. In Someone Left a Horse on the Shore, the Trojan Horse myth was used to talk about issues of land and opportunity in a city like Delhi. At a deeply personal level, the city of Delhi remains a fascination, even fixation, for Scaria. One of the reasons is that he still finds himself an outsider in the city. “It’s a very mixed feeling all the time. After so many years, you take many things for granted, but you are reminded that you can’t. I didn’t even think earlier that I was a migrant, but now I know I am not going back anywhere, at least not physically. I am only going closer to my nostalgic past. I am very comfortable in Delhi in every which way, but the fact that I am an outsider remains.” Another major aspect of Scaria’s work is form itself. He has greatly influenced the video art scene in India, which till a few years ago wasn’t a much recognised form of art in the country, especially in traditional art galleries. Scaria sheds some light on the time he started exploring this medium. An Inlaks Scholarship in 2002 gave him a chance to go to the UK and Italy for a five-month residency course. “All kinds of experimental things were happening in Europe at that time. I never went to a white cube gallery there. It was always a friend’s place or some experimental place. People were arguing over

familiarity… It was all about creating highly conceptual pieces. It was a much more productive time than I had ever had, and it really influenced me. I connected with various interesting people from different backgrounds.” After Scaria came back to India, he started stretching his art into different directions. One of these was video art. Armed with a small video camera and self-taught editing skills, he undertook various video projects. During one residency at KHOJ International Artists’ Association, Scaria got to know of Chintan, an NGO which works with rag-pickers and recyclers. He met two rag-pickers associated with the NGO, Sohail and Mariyan, who he followed for a month and came up with a 17-minute long docu- fiction video titled A day with Sohail and Mariyan (2004). “The idea was to accommodate the city and its many layers in different ways,” he says. In another video project, Raise your hands those who have touched him, he had intimate conversations with people in and around Delhi who’d had any direct interaction with Mahatma Gandhi. Video art still plays an important role in Scaria’s work. And so does the critique of urbanisation related issues. He feels that the role of an artist is becoming more and more crucial in society. Even as he steers clear of sloganeering, the element of political activism in his work remains strong. “As artists, we always fear many things as our support system usually comes from elsewhere. But if your logic and perspective is always linked to a source of income, then you are in a soup.” One of the things he is taking a stand against right now is the puncturing of the secular ethos of our cities. “This is going to ruin this country. Our strength is in our diversity. The moment you start

saying ‘This is not us’, it’s a huge problem. In many ways, nothing is ours. Civilisation itself is a hugely fabricated myth,” he says. According to him, it is time for artists to assert themselves. Writers are doing it by returning their awards. Scaria’s work itself, especially in this context, is significant. He has carved a niche for himself as an experimental contemporary artist not only in India but also globally. Hoskote, who curated India’s first- ever national pavilion at the Venice Biennale in 2011 and chose to present Gigi Scaria among the four artists he selected, asserts as much. “Both in India and overseas, by gradual degrees, Scaria’s work is now being recognised for the seriousness of its engagement with contemporary political and cultural urgencies.” He recites the example of Elevator From the Subcontinent, the video installation that Scaria created for the pavilion, which became one of the most popular works in the 2011 edition of the Venice Biennale. “People would queue up to enter the installation and were dazzled by its sophisticated scenarios of urban transition. At the same time, this is a profoundly serious work that addresses the disorientation, asymmetry and renegotiation that accompany the experience of a big city, of migration and resettlement,” says Hoskote. (‘The Ark’ is on view at Chemould Prescott Road, Mumbai, till 21 November) Show paged format