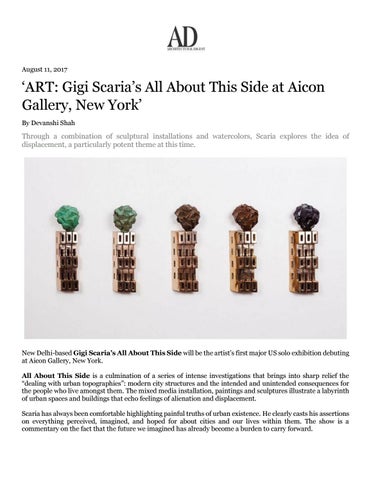 ‘ART: Gigi Scaria’s All About This Side at Aicon Gallery, New York’ By Devanshi Shah

Through a combination of sculptural installations and watercolors, Scaria explores the idea of displacement, a particularly potent theme at this time.

New Delhi-based Gigi Scaria’s All About This Side will be the artist’s first major US solo exhibition debuting at Aicon Gallery, New York. All About This Side is a culmination of a series of intense investigations that brings into sharp relief the “dealing with urban topographies”: modern city structures and the intended and unintended consequences for the people who live amongst them. The mixed media installation, paintings and sculptures illustrate a labyrinth of urban spaces and buildings that echo feelings of alienation and displacement. Scaria has always been comfortable highlighting painful truths of urban existence. He clearly casts his assertions on everything perceived, imagined, and hoped for about cities and our lives within them. The show is a commentary on the fact that the future we imagined has already become a burden to carry forward.

The thematic concern of All About This Side echoes Scaria’s first project for an American museum, Gigi Scaria: City Unclaimed, held in 2013 at the Smart Museum of Art, the University of Chicago. A large photo-based mural of an imaginary cityscape, and a 3.6-meter high water fountain were installed on site for 12 months.

The exhibition looks at specific notions of the ‘mind’, ‘exhaustion’, and ‘cultural enactment’. Scaria postulates that there must be another, mind watching every short-sighted, selfish action we commit, to prolong our own existence from the other side of the wall; the wall we believe will protect us from our own nature. All About This Side invokes specific aspects of human existence through an examination of the protective barriers erected by individuals. The show forces us to reflect on how architects of our generation are more inclined to put their creative energies into making fictional barriers more permanent as opposed to building a habitat for modernity’s survival. Or, in the artist’s words, “the future of this present has become the past of any ‘past’ we could ever imagine.”