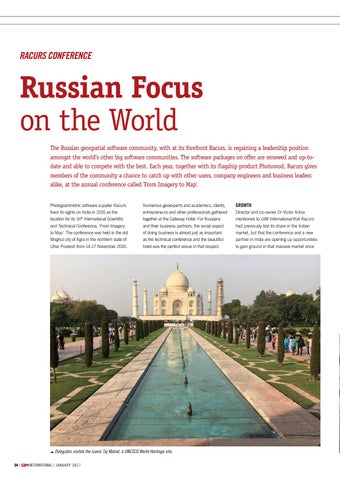 Russian Focus on the World The Russian geospatial software community, with at its forefront Racurs, is regaining a leadership position amongst the world’s other big software communities. The software packages on offer are renewed and up-todate and able to compete with the best. Each year, together with its flagship product Photomod, Racurs gives members of the community a chance to catch up with other users, company engineers and business leaders alike, at the annual conference called ‘From Imagery to Map’. Photogrammetric software supplier Racurs fixed its sights on India in 2016 as the location for its 16th International Scientific and Technical Conference, ‘From Imagery to Map’. The conference was held in the old Moghul city of Agra in the northern state of Uttar Pradesh from 14-17 November 2016.

Numerous geoexperts and academics, clients, entrepreneurs and other professionals gathered together at the Gateway Hotel. For Russians and their business partners, the social aspect of doing business is almost just as important as the technical conference and the beautiful hotel was the perfect venue in that respect.

Growth Director and co-owner Dr Victor Adrov mentioned to GIM International that Racurs had previously lost its share in the Indian market, but that the conference and a new partner in India are opening up opportunities to gain ground in that massive market once 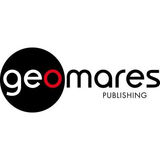