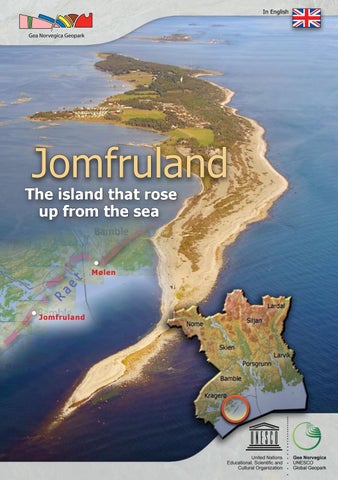 The island that rose up from the sea

DIVERSE ISLAND One old legend about Jomfruland says that the island was once under water, and was inhabited by Sea Folk. Another says that once upon a time, mermaids lived on the island. In our short account of the Island&#39;s history, we choose to rely on the first legend, because that which today is Jomfruland did indeed lie under water for a long time – until the land rose again after being pressed down by the enormous weight of the ice during many ice ages. stood on the sea floor, and ice Of ice and sea and glacial melt-rivers depositThe past 2.6 million edstone, gravel and clay in front years of earth history is of it. The ice edge remained characterized by a series here for several hundred years, of glaciations. The last and when it eventually retreated great Ice Age, the one it left behind a ridge of these we know most about, glacial deposits on the seafloor. was at its greatest extent We call this ridge the “Ra”, and around 20,000 years ago. traces of it are found around all Fortunately, it became Long pebbly beaches give the of Scandinavia. When the ice warmer, and the ice island a special character. disappeared, the land began to melted a long way back rise, and after a few thousand years the top on mainland Norway. Seawater flowed of the Ra reached sea level. On Jomfruland in as the ice melted. When an ice sheet this happened around 4,000 years ago. retreats, it occurs in pulses of melting, Waves, currents and storms sorted and with colder periods in between. One of washed out the finer material, while stones these colder periods during the last Ice were struck against one another eventually Age left an especially clear imprint. making them smooth and rounded. One can Around 12,800 years ago the inland ice still hear the power of the waves shifting sheet grew considerably, all the way to the stones down by the water&#39;s edge. where Jomfruland lies today. The ice sheet Top of page: Stone, gravel and clay was deposited in front of the ice sheet… Photo: Mona Hendriksen

Below: Jomfruland seen from the southern tip. Photo: Johannes Fredriksen

2 Saltstein (“Salt stone”) Headlands with fine glacially-polished rocks are visible several places on the island. These are ancient gneisses, altered deep beneath high mountain chains onebillion years ago. In the bedrock you can see marks left by the scouring of ice in the form of striations and grooves in the bedrock, and in some places also fine drainage channels created by the high water pressure under the ice. Wind blown sand dunes At Øitangen one finds a large area of sand dunes, deposited by the wind. The sand area is now partly overgrown by various species of grass. On the beach there is also a plant called “sea holly”. This is one of the rarest plants along the Norwegian coast. “Sea holly” – with its leathery and waxy leaves – is adapted for living in dry, sandy areas. It is very fragile and must not be picked or destroyed. The Oak Forest In the protected area of Øitangen, there is a beautiful cultural landscape with a lush, old deciduous forest. In springtime the forest floor is covered by a magnificent carpet of white wood anemones. In addition to the wood anemones, the deciduous forest is home to many rare species of plants, insects and birds.

Above: The east side of the island has several coves and bays where seaweed collects. These seaweed localities have provided an important resource in the past.

Seaweed localities Seaweed was an important natural resource on the island for several hundred years and was mainly used as fertilizer in the fields. In the 1950s artificial fertilizer took over. Places where seaweed naturally washed up on the beach were used as temporary storage and drying places for the seaweed. The seaweed, rich in vitamin and mineral content, could also be used as a feed supplement for the animals on the island. The green grassy areas on the otherwise stony beaches are testimony to the hard work with the seaweed harvest in times past. Cultural landscape The cultural landscape of Jomfruland is open, with fields, meadows and planted Under: A landscape that is good for wandering.

ground, and is a result of grazing and farming for hundreds of years. Lovely old stone walls wind their way hrough the beautiful landscape. Today there are fewer farms in use and the reduction in grazing has caused some areas to become overgrown. Fishing and piloting of boats have also been important sources of employment in the past. Now, most of the employment on the island is in tourism and service industries Bird Observatory on Jomfruland There is a bird observatory at Øitangen that is run by the Telemark Ornithological Society. Jomfruland is known for its many migratory birds in spring and autumn. Each year 15,000 birds are caught and ringbanded here and about 220 different species are registered each year. Of these, only 60-70 species nest on the island. © Gea Norvegica Geopark 2016 Photos taken by the Geopark if otherwise unnamed. Lay-out by J.F.

Does the sign point to the “Nixie&#39;s Tarn”, immortalized by the artist Theodor Kittelsen?