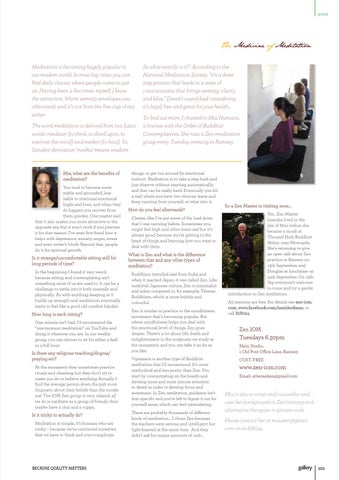 Meditation is becoming hugely popular in our modern world. In most big cities you can find daily classes where people come to just sit. Having been a few times myself, I know the attraction. Warm serenity envelopes you afterwards and it’s not from the free cup of tea either. The word meditation is derived from two Latin words: meditari (to think, to dwell upon, to exercise the mind) and mederi (to heal). Its Sanskrit derivation ‘medha’ means wisdom.

Mia, what are the benefits of meditation? You tend to become more stable and grounded, less liable to irrational emotional highs and lows, and when they do happen you recover from them quicker. One master said that it also makes you more attractive to the opposite sex, but it won’t work if you practise it for that reason! I’ve seen first-hand how it helps with depression, anxiety, anger, stress and even writer’s block. Beyond that, people do it for spiritual growth.

Is it strange/uncomfortable sitting still for long periods of time? In the beginning I found it very weird, because sitting and contemplating isn’t something most of us are used to. It can be a challenge to settle into it both mentally and physically. As with anything, keeping at it builds up strength and meditation eventually starts to feel like a good old comfort blanket.

How long is each sitting? One minute isn’t bad, I’d recommend the “one-moment meditation” on YouTube and doing it wherever you are. In our weekly group, you can choose to sit for either a half or a full hour.

Is there any religious teaching/dogma/ praying etc? At the monastery they sometimes practice rituals and chanting, but they don’t try to make you do or believe anything. Actually I find the average person down the pub more dogmatic about their beliefs than the monks are! The IOM Zen group is very relaxed, all we do is meditate as a group of friends, then maybe have a chat and a cuppa.

Is it tricky to actually do? Meditation is simple, it’s humans who are tricky – because we’ve convinced ourselves that we have to think and over-complicate

So what exactly is it? According to the National Meditation Society, “it’s a three step process that leads to a state of consciousness that brings serenity, clarity, and bliss.” Doesn’t sound bad considering it’s legal, free and great for your health… To find out more, I chatted to Mia Hansson, a trainee with the Order of Buddhist Contemplatives. She runs a Zen meditation group every Tuesday evening in Ramsey.

things, or get run around by emotional instinct. Meditation is to take a step back and just observe without reacting automatically, and that can be really hard. Eventually you hit a wall where you have two choices: leave and keep running from yourself, or relax into it.

How do you feel afterwards? Clearer, like I’ve put some of the load down that I was carrying before. Sometimes you might feel high and other times sad but it’s always good, because you’re getting to the heart of things and learning how you want to deal with them.

What is Zen and what is the difference between that and any other types of meditation? Buddhism travelled east from India and when it reached Japan, it was called Zen. Like medieval Japanese culture, Zen is minimalist and sober compared to, for example, Tibetan Buddhism, which is more bubbly and colourful. Zen is similar in practice to the mindfulness movement that’s becoming popular. But where mindfulness helps you deal with the emotional level of things, Zen goes deeper. There’s a lot about life, death and enlightenment in the scriptures we study at the monastery, and you can take it as far as you like. Vipassana is another type of Buddhist meditation that I’d recommend. It’s more methodical and less poetic than Zen. You start by concentrating on the breath and develop more and more minute attention to detail in order to develop focus and awareness. In Zen meditation, guidance isn’t that specific and you’re left to figure it out for yourself more, which can feel intimidating. There are probably thousands of different kinds of meditation... I chose Zen because the teachers were serious and intelligent but light-hearted at the same time. And they didn’t ask for insane amounts of cash…

So a Zen Master is visiting soon… Yes…Zen Master Leandra lived in the Isle of Man before she became a monk at Throssel Hole Buddhist Abbey near Newcastle. She’s returning to give an open talk about Zen practice in Ramsey on 13th September, and Douglas at lunchtime on 14th September. On 15th Sep everyone’s welcome to come and try a gentle introduction to Zen meditation. All sessions are free. For details see zen-iom. com, www.facebook.com/zenisleofman, or call 818024.

Mia is also a writer and counsellor and uses her background in Zen training and alternative therapies in private work. Please contact her at miaszen@gmail. com or on 818024. 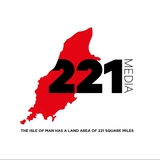