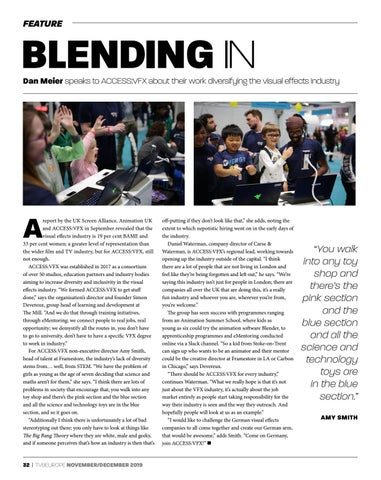 Dan Meier speaks to ACCESS:VFX about their work diversifying the visual effects industry

report by the UK Screen Alliance, Animation UK and ACCESS:VFX in September revealed that the visual effects industry is 19 per cent BAME and 33 per cent women; a greater level of representation than the wider film and TV industry, but for ACCESS:VFX, still not enough. ACCESS:VFX was established in 2017 as a consortium of over 50 studios, education partners and industry bodies aiming to increase diversity and inclusivity in the visual effects industry. “We formed ACCESS:VFX to get stuff done,” says the organisation’s director and founder Simon Devereux, group head of learning and development at The Mill. “And we do that through training initiatives, through eMentoring; we connect people to real jobs, real opportunity; we demystify all the routes in, you don’t have to go to university, don’t have to have a specific VFX degree to work in industry.” For ACCESS:VFX non-executive director Amy Smith, head of talent at Framestore, the industry’s lack of diversity stems from… well, from STEM. “We have the problem of girls as young as the age of seven deciding that science and maths aren’t for them,” she says. “I think there are lots of problems in society that encourage that; you walk into any toy shop and there’s the pink section and the blue section and all the science and technology toys are in the blue section, and so it goes on. “Additionally I think there is unfortunately a lot of bad stereotyping out there; you only have to look at things like The Big Bang Theory where they are white, male and geeky, and if someone perceives that’s how an industry is then that’s

off-putting if they don’t look like that,” she adds, noting the extent to which nepotistic hiring went on in the early days of the industry. Daniel Waterman, company director of Carse & Waterman, is ACCESS:VFX’s regional lead, working towards opening up the industry outside of the capital. “I think there are a lot of people that are not living in London and feel like they’re being forgotten and left out,” he says. “We’re saying this industry isn’t just for people in London; there are companies all over the UK that are doing this, it’s a really fun industry and whoever you are, wherever you’re from, you’re welcome.” The group has seen success with programmes ranging from an Animation Summer School, where kids as young as six could try the animation software Blender, to apprenticeship programmes and eMentoring conducted online via a Slack channel. “So a kid from Stoke-on-Trent can sign up who wants to be an animator and their mentor could be the creative director at Framestore in LA or Carbon in Chicago,” says Devereux. “There should be ACCESS:VFX for every industry,” continues Waterman. “What we really hope is that it’s not just about the VFX industry, it’s actually about the job market entirely as people start taking responsibility for the way their industry is seen and the way they outreach. And hopefully people will look at us as an example.” “I would like to challenge the German visual effects companies to all come together and create our German arm, that would be awesome,” adds Smith. “Come on Germany, join ACCESS:VFX!” n