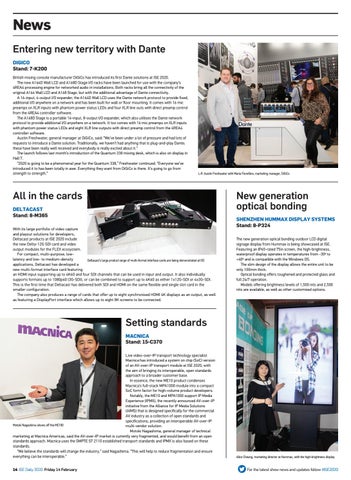 All in the cards

DELTACAST Stand: 8-M365 With its large portfolio of video capture and playout solutions for developers, Deltacast products at ISE 2020 include the new Delta-12G SDI card and video output modules for the FLEX ecosystem. For compact, multi-purpose, lowlatency and low- to medium-density Deltacast’s large product range of multi-format interface cards are being demonstrated at ISE applications, Deltacast has developed a new multi-format interface card featuring an HDMI input supporting up to 4K60 and four SDI channels that can be used in input and output. It also individually supports formats up to 1080p60 (3G-SDI), or can be combined to support up to 4K60 as either 1x12G-SDI or 4x3G-SDI. This is the first time that Deltacast has delivered both SDI and HDMI on the same flexible and single slot card in the smaller configuration. The company also produces a range of cards that offer up to eight synchronised HDMI 4K displays as an output, as well as featuring a DisplayPort interface which allows up to eight 8K screens to be connected.

SHENZHEN HUMMAX DISPLAY SYSTEMS Stand: 8-P324 The new generation optical bonding outdoor LCD digital signage display from Hummax is being showcased at ISE. Featuring an IP65-rated 75in screen, the high-brightness, waterproof display operates in temperatures from -30º to +40º and is compatible with the Windows OS. The slim design of the display allows the entire unit to be only 100mm thick. Optical bonding offers toughened and protected glass and full 24/7 operation. Models offering brightness levels of 1,500 nits and 2,500 nits are available, as well as other customised options.

Setting standards MACNICA Stand: 15-C370 Live video-over-IP transport technology specialist Macnica has introduced a system on chip (SoC) version of an AV-over-IP transport module at ISE 2020, with the aim of bringing its interoperable, open standards approach to a broader customer base. In essence, the new ME10 product condenses Macnica’s full-stack MPA1000 module into a compact SoC form factor for high-volume product developers. Notably, the ME10 and MPA1000 support IP Media Experience (IPMX), the recently announced AV-over-IP initiative from the Alliance for IP Media Solutions (AIMS) that is designed specifically for the commercial AV industry as a collection of open standards and specifications, providing an interoperable AV-over-IP Motoki Nagashima shows off the ME100 multi-vendor solution. Motoki Nagashima, general manager of technical marketing at Macnica Americas, said the AV-over-IP market is currently very fragmented, and would benefit from an open standards approach. Macnica uses the SMPTE ST 2110 established transport standards and IPMX is also based on these standards. “We believe the standards will change the industry,” said Nagashima. “This will help to reduce fragmentation and ensure everything can be interoperable.” 14 ISE Daily 2020 Friday 14 February

Alice Cheung, marketing director at Hummax, with the high-brightness display

For the latest show news and updates follow #ISE2020