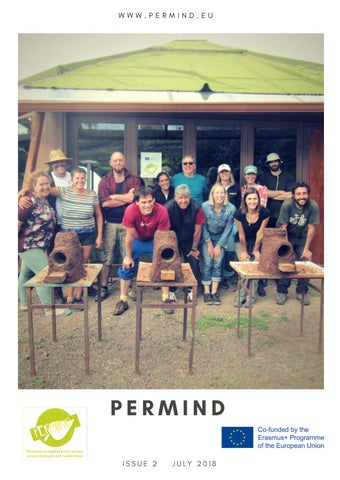 PERMIND ISSUE 2 Care of land Sustainability is possible, respect for the land is needed

Care of people Specially those with psychic discomfort

Fare share Social cooperatives that can change the world

04 The training of the PERMIND trainers in

05 The starting of the PERMIND course in

all the partners&#39; countries

This is the second issue of the biannual newsletter PERMIND. We have to say that we are very happy with the warm reception of this initiative, so THANKS! We received several compliments that encourage us to keep on working on permaculture as a tool to improve the wellbeing of the people with psychic discomfort. These last months have been really excited and full of activity with the training of the professionals in Tenerife and the starting

of the PERMIND course in all the countries. In the next pages we are offering you a summary of the great experience that the PERMIND trainers lived in the headquarters of the ADP last March, as well as an overview of the first steps of PERMIND in Spain, Slovenia, Greece and Sweden. Come on! Keep on reading and get informed about everything.

The training of the PERMIND trainers in Tenerife

The starting of the PERMIND course in all the partners&#39; countries

it. The trainers had the opportunity to compare the

main peculiarities of permaculture prior to the starting of

information read in the manual with the knowledge

the pilot course in each of the partners&#39; countries.

acquired directly in the farm. During this training of the trainers, we set aside some time to reflect on the teachings

The end of March 2018 has been really fruitfull for the ADP. On the

from the day before. They verified that it was an enriching

way to reflect step by step on the learning process and

promote the exchange of knowledge amongst the

pedagogical guide that collects 22 years of experience working on

as a therapy for people with mental illness. The PERMIND manual

experience and, according to their impressions, the course

in the PERMIND partners’ countries.

This process of “grounding” was also done in the

On the other hand, we organized an intensive training course for

trainers from 19th to 23rd March in our farm. We implemented the

ADP’s associated partner. From the very beginning of the

project, IASS is committed with the dissemination of

maintenance of the cultivation area, handling the seeds and

PERMIND. They have been an excellent example for the

bioconstruction as a therapy.

rest of partners about how to use permaculture with

The starting of the PERMIND course in all the partners&#39; countries The PERMIND pilot course in Spain is being implementing in two different places. On the one hand, we are testing the course in an urban environment in Valladolid. The headquarters of INTRAS are sited in a residential area in the city. We had an empty space around our building that is becoming the permacultural garden. We hope that this initiative will help us to integrate the centre in the neighbourhood (the building was opened in 2016) and to give a positive and friendlier picture of mental illness. So far, eight people are committed with the training and we have to say that they are really excited about it! They already collected newspapers and cardboard to protect the soil, pruning and garden cleaning waste to increase the organic material in the garden and they even looked for tiles to create the paths of life.

On the other hand, we are testing the PERMIND training course in a rural area in the province of Zamora (nearby a village called Torres de Carrizal). Ten people are already preparing the soil and getting involved in the permacultural world. They go to the farm in a van every day very early in the morning, at 6.30! This commitment is something really difficult to achieve when working with people with psychic discomfort. The professionals working with them are really surprised and happy to see that they love the training so much! Being in direct contact with the nature really makes a difference and gives our users a space to be relaxed and just enjoy doing something with their hands. We are very optimistic with the PERMIND course and looking forward to see very soon the positive results!

The PERMIND project in Slovenia is currently being implemented in two locations in the capital. Since ŠENT&#39;s target group are people in rehabilitation who are still dealing with mental health difficulties, most of our focus right now is on motivation and explaining the various positive aspects of participating in a permaculture garden. The specific program we chose to implement permaculture is called “Residential housing”. To put it simply, it is where people, who are not yet ready to live on their own, live under the supervision of a professional and learn basic life skills. We felt that a garden would be an excellent addition to our program, as it would allow us to motivate our users, help them engage with other people and the neighborhood, as well as help in eating healthy and responsible disposal of biological waste. Because most of the units where the PERMIND courses will be used are rented and in urban environments, gardens are smaller and need to be easy to access and maintain. We need to make sure that the garden provides a relaxing and therapeutic environment and never becomes a source of stress for our users. Working with the first housing group, a garden layout was designed, tools, newspapers, cardboard and soil gathered. The soil was the biggest issue for ŠENT, as the soil from the garden could not be used, due to city zoning laws. We had to import the soil and design raised beds, which was a lot more fun and gave us options for decoration. We are now waiting for the owner&#39;s consensus, although everyone is very impatient to get started. Our experience is, that just being outside and taking an active interest in the garden has already given us motivation and commitment to see thing through. We are optimistic and hope to see the garden being used and useful for housing groups sometime at the end of June.

The pre-vocational program conducted in Alexandroupolis, Greece, is a main activity developed by the Society of Social Psychiatry and Mental Health, being the main part of the PERMIND project. The end goal is the establishment of permaculture both as a way of cultivation and as a way of skills improvement and mental health well-being. We support the idea of PERMIND training course, which is not only to teach a sustainable way to cultivate the land, but also to train transversal competencies useful for social and labor integration of people with mental distress. Garden designing was the first key step out of many others, such as: cultivating soil, drawing our allotments, developing the irrigation systems and starting our first cultivation. Our users have started being trained on the method of permaculture cultivation. Trainees and trainers are having weekly meetings to discuss the curriculum and the pedagogy test. They have already bought all the necessary stuff for cultivation. The idea is that, our users will improve their social competences and practical skills by using these tools.

The staff of our organization has been trained on the permaculture philosophy and technique supporting, therefore, trainees to encounter and avoid withdrawals. Professionals have learned a new way to work the land and understand the environment by attending trainers training. Another main target by the time is the dissemination of project activities internally and externally so that we build alliances with key-stakeholders. All organizations and individual participants will contribute to share information about outcomes and results in the course of the project through specific communication channels, including website, social media, newsletters etc. The main aim is to increase the projectâ&amp;#x20AC;&amp;#x2122;s impact and added value in order to ensure its future sustainability in Greece. We aim to raise awareness about the benefits of applying permaculture and to engage different target groups building different networks and alliances.

Maja Riise is a gardener at Onsala Parish and also unit manager for the farm Noah&#39;s Ark. Onsala is located approximately 40km outside Gothenburg, Sweden, and at the farm there are - in addition to the garden â&amp;#x20AC;&amp;#x201C; also horses, donkeys, sheep, goats and hens. Farm activities for children have been running since 1995 and today the farm also operates an open preschool for children and families, as well as free time activities. &quot;It&#39;s not just the garden that interests me but the combination of what nature, animals and gardens can do for us as people&quot; says Maja Riise. Seven years ago, when Maja was a newly trained gardener, she was given the opportunity to launch a greenenvironmental action program for pre-rehabilitation at Noah&#39;s Ark. There were many requests from the local community about setting up routines for sending young people and adults who were not feeling well to the farm for recovery. Noah&#39;s Ark is now part of the European project PERMIND as associated partner and has been working with Changemaker since April this year with a 1-year pilot project, building a permaculture garden at the farm and using it in its pre-rehabilitation work. Maja tells us that at Noah&#39;s Ark there was already an interest in permaculture as a method. Therefore, she was

grateful to be asked to take part in the PERMIND pilot project when Changemaker proposed to the organisation to participate as associated partner. At the end of March, Maja and Johanna Apler-Lilja from Noah&#39;s Ark, two people from Changemaker and the representatives from the other partners in the PERMIND project, went to Tenerife to learn from the farm where the first permaculture initiative started many years ago thanks to the work of ADP. &quot;I saw the trip as a knowledge exchange, where we received inspiration from the others to really deepen our understanding of permaculture, which is an area we have been interested in for a while. It was a very inspiring training trip, and it was great to meet so many committed people who participated.â&amp;#x20AC;? Since April, a portion of the garden at Noahâ&amp;#x20AC;&amp;#x2122;s Ark has been implemented in accordance with the permaculture principles. Working according to the PERMIND educational material, Maja says that the participating group at the farm has been very interested in permaculture as a method. The project has also made both the people at the farm and in the parish more aware of sustainability. Everyone is looking forward to being part of the 1-year pilot project.

Just send an email to lmd@intras.es

The European Commission support for the production of this publication does not constitute an endorsement of the contents which reflects the views only of the authors, and the Commission cannot be held responsible for any use which may be made of the information contained therein. 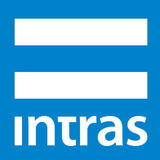