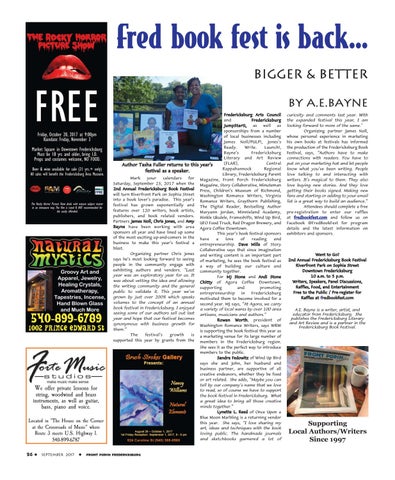 We offer private lessons for string, woodwind and brass instruments, as well as guitar, bass, piano and voice. Located in "The House on the Corner at the Crossroads of Music" where Route 3 meets U.S. Highway 1. 540-899-6787 26

Fredericksburg Arts Council Fredericksburg and JumpStart!, as well as sponsorships from a number of local businesses including James Noll/PULP!, Jones’s Ready. Write. Launch!, Bayne’s Fredericksburg Literary and Art Review (FLAR), Central Author Tasha Fuller returns to this year's Rappahannock Regional festival as a speaker. Library, Fredericksburg Parent Mark your calendars for Magazine, Front Porch Fredericksburg Saturday, September 23, 2017 when the Magazine, Story Collaborative, Minuteman 2nd Annual Fredericksburg Book Festival Press, Children’s Museum of Richmond, will turn Riverfront Park on Sophia Street Washington Romance Writers, Virginia into a book lover’s paradise. This year’s Romance Writers, Graythorn Publishing, festival has grown exponentially and The Digital Reader, Bestselling Author features over 120 writers, book artists, Maryann Jordan, Minnieland Academy, publishers, and book related vendors. Hinkle Ukulele, Frameshifts, Wind Up Bird, Partners James Noll, Chris Jones, and Amy UFO Food Truck, Red Dragon Brewery, and Bayne have been working with area Agora Coffee Downtown. sponsors all year and have lined up some This year’s book festival sponsors of the most exciting up-and-comers in the have a love of reading and business to make this year’s festival a entrepreneurship. Dave Mills of Story blast. Collaborative says that since imagination Organizing partner Chris Jones and writing content is an important part says he’s most looking forward to seeing of marketing, he sees the book festival as people in the community engage with a way of building our culture and exhibiting authors and vendors. “Last community together. year was an exploratory year for us. It For MJ Stone and Andi Stone was about vetting the idea and allowing Chitty of Agora Coffee Downtown, the writing community and the general supporting and promoting public to validate it. This year we’ve entrepreneurship in Fredericksburg grown by just over 200% which speaks motivated them to become involved for a volumes to the concept of an annual second year. MJ says, “At Agora, we carry book festival in Fredericksburg. I enjoyed a variety of local wares by over 100 area seeing some of our authors sell out last artisans, musicians and authors.” year and hope that our festival becomes Rowan Worth, president of synonymous with business growth for Washington Romance Writers, says WRW them.” is supporting the book festival this year as The festival’s growth is a marketing venue for its large number of supported this year by grants from the members in the Fredericksburg region. She sees it as the perfect way to introduce members to the public. Sandra Fedowitz of Wind Up Bird says she and John, her husband and business partner, are supportive of all creative endeavors, whether they be food or art related. She adds, “Maybe you can tell by our company’s name that we love to read, so of course we have to support the book festival in Fredericksburg. What a great idea to bring all those creative minds together.” Lynette L. Reed of Once Upon a Blue Moon Marbling is a returning vendor this year. She says, “I love sharing my art, ideas and techniques with the book loving public. The handmade journals and sketchbooks garnered a lot of

curiosity and comments last year. With the expanded festival this year, I am looking forward to more of the same." Organizing partner James Noll, whose personal experience in marketing his own books at festivals has informed the production of the Fredericksburg Book Festival, says, “Authors have to make connections with readers. You have to put on your marketing hat and let people know what you've been writing. People love talking to and interacting with writers. It's magical to them. They also love buying new stories. And they love getting their books signed. Making new fans and starting or adding to your email list is a great way to build an audience.” Attendees should complete a free pre-registration to enter our raffles at fredbookfest.com and follow us on Facebook @FredBookFest for program details and the latest information on exhibitors and sponsors.

It looks like Fredericksburg is about to hit a “time warp” this fall with a showing of the cult classic Rocky Horror Picture Show. This zany, audience participation film opened in 1975 in a small theatre in California, and can still be found showing somewhere in the US on any given day. For those of us who survived the 70s, there is a fond memory of escapism when we think about the night we first saw this iconic production. The resurgence and revival of this film over the years is curious, but understandable once you see it. The film will air on a blow-up screen in the historic Market Square on October 20th at 9:00 PM. There will be a rain date of November 3rd at 9:00 PM. It is an R rated film, so only for those 18 and older. IDs will be required, as the museum will be offering beer and wine. The museum press release promotes this show quite accurately, as a mature themed film presented in an “immature fashion.” The showing is sponsored by the Fredericksburg Area Museum in conjunction with the Fredericksburg Arts Commission, Parks and Recreation and the UMW Rich Weirdos Club. The Rich Weirdos are a theatrical group that annually presents the Rocky Horror Picture Show to enthusiastic audiences on campus. Their Facebook page displays information on the show, as well as

photographs. This event exhibits and promotes Fredericksburg’s vibrant arts community. The story plot evolves around a young, recently engaged couple who get a flat tire in a ferocious rainstorm. They end up having to call on the spooky abode of Dr. Frank-N-Furter. The doctor is in the midst of a party celebrating a new invention of sorts. Needless to say, wackiness ensues. It is a musical foray into the new age of cinema where anything goes, and crazily enough, anything can be considered art, depending on who is viewing and reviewing. There must be something to this phenomena though, as it is heading towards a half century of people enjoying the production. I talked with Melanie Johnson who is the Sr. Development Officer for the newly re-opened museum. She shared with me some of the motivation in backing the showing. She explained that it is a bridge between the students at Mary Washington and the city. All of those involved would love to bring the campus closer to the community. The show is free to the public (18 and older), but the proceeds from drink sales will benefit the museum. Many of us were sad to see the bank building close up, and glad there is activity to support the new facility. Fredericksburg is good at costumes, so I’m sure this will be an event not to be missed. I’m thinking along the lines of a zombie bride, or a creepy maid, the possibilities are endless…

Sometimes someone comes into our awareness that can teach us how to make the most of our lives. Edward Russell was one of those people, and the community has an opportunity to get a glimpse into his extraordinary life by stopping by the Central Rappahannock Regional Library (CRRL) during the month of Septemberl. Russell's artwork will be on display at the Headquarters Branch, but the watercolors that visitors can see or purchase are small examples of what he left behind when he passed away in April of last year. "He believed in the 5 'P's' as he called it," says Maria Janney, a longtime family friend who is keeping his story alive. "Painting, Plants, Planes, Prayer, and Piano." Russell was a master horticulturist, avid member of the Model Plane Club who built all of his own planes, and a pianist who received a rare appointment to study under a prominent member of the National Symphony, but his favorite 'P', according to Janney, was the painting part of his life. "He believed that everyone should be able to own original art. His pieces were always well priced so that he could share his joy with the community," says Janney. Russell had art showings at the library at least two times a year and Janney plans to continue that legacy. Though art was a constant passion, it did not always play center stage in his life. After serving in both the European and Asian chapters of World War II, including being in France on DDay, Russell studied at the National Academy of Art. He then became curator of the Army Corps of Engineers Museum in Ft. Belvoir. While at the museum, he was commissioned to paint over 50 paintings of the former and present chiefs of the Army Corp of Engineers.

"He had a love for people and loved listening to everyone else's stories even though he had quite a few of his own," says Janney. Some of the stories that he passed onto her and her family include traveling out to the swampland that eventually became Dulles to find a certain reed which he and his brother cooked down to make charcoal pencils for their art. Another story includes running into Franklin Delano Roosevelt's car as a telegram courier. FDR made sure he was okay before sending him on his way. "He was full of these little snippets of history and they were so powerful," says Janney. "He would encourage my sons and others to hunger for knowledge just like he did. He wanted young people to appreciate history. That appreciation and thirst for knowledge characterized his life."

His paintings capture the beauty of our area, as well as other places around the globe and offer a slightly impressionistic view of the world. "After what he witnessed in the war, he could have taken a different path all together, but instead he continued to look forward and learn new things," Janney says. "He taught us to always look for the positive and good in things, even when you have had setbacks and suffered. He was such a precious man, I hope people sense that when they see his artwork." Russell's works will be showing the entire month of Septemebr at the CRRL Headquarters, located at 1201 Caroline Street. Stop by and honor his legacy. Christina Ferber is a teacher, mother & writer living in FXBG.