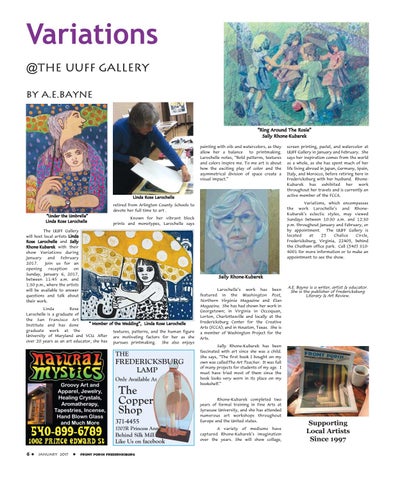 By Sarah perry After four years as acting president of the Board of Directors and nearly 20 years volunteering at Downtown Greens (DTG), Ryan Anderson has stepped down from the Board. Taking his place as president is Kathy Vining who will be profiled in the January DTG newsletter.

“Ring Around The Rosie” Sally Rhone-K Kubarek painting with oils and watercolors, as they allow her a balance to printmaking. Larochelle notes, “Bold patterns, textures and colors inspire me. To me art is about how the exciting play of color and the asymmetrical division of space create a visual impact.”

Known for her vibrant block prints and monotypes, Larochelle says

The UUFF Gallery will host local artists Linda Rose Larochelle and Sally Rhone-K Kubarek with their show Variations during January and February 2017. Join us for an opening reception on Sunday, January 6, 2017, between 11:45 a.m. and 1:30 p.m., where the artists will be available to answer questions and talk about their work.

Linda Rose Larochelle is a graduate of the San Francisco Art “ Member of the Wedding”, Linda Rose Larochelle Institute and has done graduate work at the textures, patterns, and the human figure University of Maryland and VCU. After are motivating factors for her as she over 20 years as an art educator, she has pursues printmaking. She also enjoys

FREDERICKSBURG LAMP Only Available At

screen printing, pastel, and watercolor at UUFF Gallery in January and February. She says her inspiration comes from the world as a whole, as she has spent much of her life living abroad in Japan, Germany, Spain, Italy, and Morocco, before retiring here in Fredericksburg with her husband. RhoneKubarek has exhibited her work throughout her travels and is currently an active member of the FCCA.

SP: We have to start with the basics, so tell us about yourself! RA: I went to Mary Washington and graduated in 1999. I currently live in Hawaii and I like to think of myself as a steward for the planet. I am the farm operations manager and the apiary manager at Hoku Nui llc. (www.hokunui.com). It’s a sustainable community where we are regenerating 280 acres in upcountry Maui.

Variations, which encompasses the work Larochelle’s and RhoneKubarek’s eclectic styles, may viewed Sundays between 10:30 a.m. and 12:30 p.m. throughout January and February, or by appointment. The UUFF Gallery is located at 25 Chalice Circle, Fredericksburg, Virginia, 22405, behind the Chatham office park. Call (540) 3104001 for more information or to make an appointment to see the show.

retired from Arlington County Schools to devote her full time to art . “Under the Umbrella” Linda Rose Larochelle

Larochelle’s work has been featured in the Washington Post, Northern Virginia Magazine and Elan Magazine. She has had shown her work in Georgetown; in Virginia in Occoquan, Lorton, Charlottesville and locally at the Fredericksburg Center for the Creative Arts (FCCA); and in Houston, Texas. She is a member of Washington Project for the Arts.

A variety of mediums have captured Rhone-Kubarek’s imagination over the years. She will show collage,

SP: Do you have any parting words? SP: What is one of the accomplishments during your tenure that you are most proud of?

A.E. Bayne is a writer, artist & educator. She is the publisher of Fredericksburg Literary & Art Review.

We Have All Your Gardening Needs Since 1929 Come Shop With Us!

Sally Rhone-Kubarek has been fascinated with art since she was a child. She says, “The first book I bought on my own was calledThe Art Teacher. It was full of many projects for students of my age. I must have tried most of them since the book looks very worn in its place on my bookshelf.”

Rhone-Kubarek completed two years of formal training in Fine Arts at Syracuse University, and she has attended numerous art workshops throughout Europe and the United states.

Oh, and I founded Marenje Marimba [a program of Downtown Greens] in 2007 and we have taught the next generation how to make the instruments and the music of Zimbabwe.

Large or Small, I Sell Them All! Dreaming of Fabulous City Living? Let s Make It Happen!

RA: There are two, first: finding wonderful people to step up and take leadership roles, and second, the most recent one: putting the land in a conservation easement. That was a longstanding desire that we were never really able to do until just recently. That was able to happen because of having stable leadership throughout the organization. SP: What specific thing(s) about DTG makes it special to you? RA: The care for the land that has been happening for 21 years. People have been coming together to take care of that corner of Fredericksburg, and I think that’s not something we see people doing anymore because most things are owned personally. Downtown Greens is owned by the community, being a 501c3, so people come there and give their time and energy because they really want to be there doing it. When you want to be doing something it’s fun, exciting, and impassioned. SP: Do you have any advice for Kathy as she begins her presidency?

RA: I’m grateful for all of my involvement in Downtown Greens, for everybody that made that possible and for the volunteers who show up and continue to work. SP: If you could be any animal what animal would you be? RA: I’d be one of the groundhogs that hang out at Downtown Greens. They’re sitting pretty down there! SP: What is your favorite flower? RA: The sunflower because it’s so beautiful and it reminds me of the sun, by its name and in its image and that’s what we all need, a little sunshine. SP: Thanks so much, Ryan, for your service. If I’ve learned anything from working with you for the past four years, you’ll be back for more whirlwind youth instrument-making camps or construction sessions. Lucky for us, leaving the Board doesn’t mean you’ll leave your passion for Downtown Greens and its mission.

Sarah Perry is the Executive Director of Downtown Greens

RA: Stay positive and be flexible.