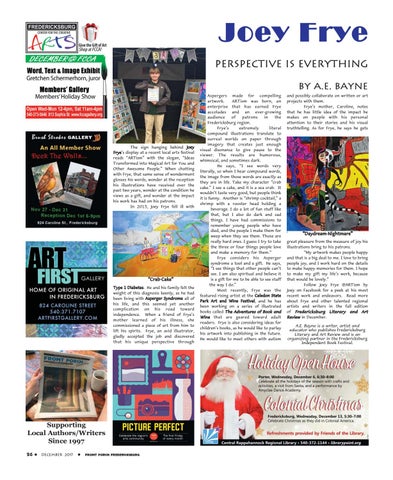 Joey Frye Perspective is everything By A.E. Bayne

The sign hanging behind Joey Frye’s display at a recent local arts festival reads “ARTism” with the slogan, “Ideas Transformed into Magical Art for You and Other Awesome People.” When chatting with Frye, that same sense of wonderment glosses his words, wonder at the reception his illustrations have received over the past two years, wonder at the condition he views as a gift, and wonder at the impact his work has had on his patrons. In 2015, Joey Frye fell ill with

“Crab-C Cake” Type 1 Diabetes. He and his family felt the weight of this diagnosis keenly, as he had been living with Asperger Syndrome all of his life, and this seemed yet another complication on his road toward independence. When a friend of Frye’s mother learned of his illness, she commissioned a piece of art from him to lift his spirits. Frye, an avid illustrator, gladly accepted the job and discovered that his unique perspective through

Aspergers made for compelling artwork. ARTism was born, an enterprise that has earned Frye accolades and an ever-growing audience of patrons in the Fredericksburg region. Frye’s extremely literal compound illustrations translate to surreal worlds on paper through imagery that creates just enough visual disonance to give pause to the viewer. The results are humorous, whimsical, and sometimes dark. He says, “I see words very literally, so when I hear compound words, the image from those words are exactly as they are in life. Take my character “crab cake.” I see a cake, and it is a sea crab. It wouldn’t taste very good, but people think it is funny. Another is “shrimp cocktail,” a shrimp with a rooster head holding a beverage. I do a lot of fun stuff like that, but I also do dark and sad things. I have had commissions to remember young people who have died, and the people I make them for weep when they see them. Those are really hard ones. I guess I try to take the three or four things people love and make a memory for them.” Frye considers his Asperger syndrome a tool and a gift. He says, “I see things that other people can’t see. I am also spiritual and believe it is a gift for me to be able to see stuff the way I do.” Most recently, Frye was the featured rising artist at the Caledon State Park Art and Wine Festival, and he has been working on a series of illustrated books called The Adventures of Book and Wine that are geared toward adult readers. Frye is also considering ideas for children’s books, as he would like to parlay his artwork into publishing in the future. He would like to meet others with autism

and possibly collaborate on written or art projects with them. Frye’s mother, Caroline, notes that he has little idea of the impact he makes on people with his personal attention to their stories and his visual truthtelling. As for Frye, he says he gets

YOU can make a difference by volunteering to visit a senior in the Fredericksburg area. Volunteer training is provided & no special skills are required. The Senior Visitors Program is a FREE community service program of Mental Health America of Fredericksburg. Visit mhafred.org or call 540-371-2704

“Daydream-N Nightmare” great pleasure from the measure of joy his illustrations bring to his patrons. “My artwork makes people happy and that is a big deal to me. I love to bring people joy, and I work hard on the details to make happy memories for them. I hope to make my gift my life’s work, because that would be lovely.” Follow Joey Frye @ARTism by Joey on Facebook for a peek at his most recent work and endeavors. Read more about Frye and other talented regional artists and writers in the fall edition of Fredericksburg Literary and Art Review in December. A.E. Bayne is a writer, artist and educator who publishes Fredericksburg Literary and Art Review and is an organizing partner in the Fredericksburg Independent Book Festival.

Is it in their blood?

Bring a little sunshine to a senior’s life! Too many seniors feel lonely and isolated.

By Mary Geil The Hite Family of Caroline County has a number of creative members. There are four Hites in this generation who share the art passion. Is it in their blood or just coincidence? Cousins Alan and Eva are featured in this article.

photography and was another encourager along his journey. J. Shelby Guss allowed him the use of his home darkroom. He learned much about color and texture in conversations with Johnny P. Johnson.

Alan lives in Caroline County. For as long as he can remember, he wanted to be a photographer. “I first remember having a point and shoot camera…very basic…around the age of 9.” he recollects. Alan grew up and attended schools in Caroline County. According to Alan, “There were no photography classes when I came through high school. I was a reader, however, and it was reading A Choice of Weapons by Gordon Parks in 1965 that really got me to thinking about the power of the photographic image.”

Mr. Hite, as he was known to many students during his 32 years teaching in the Caroline County Public Schools. Now in retirement, he pursues his photography passion as a free-lance photographer. Along with

In college, Alan was encouraged by Masaaki Okada, a friend and photographer with The Richmond Times Dispatch. Wilbur J. Chance, a principal in the Caroline County Schools when Alan started his teaching career, enjoyed

doing portraits, landscapes, seascapes, and botanical works he does documentary work featuring his home county of Caroline. At Classic Cottage Art & Antiques in Bowling Green, Virginia, he sells prints, matted and mounted prints, canvas wraps, and greeting cards featuring his photography. His photography page on Facebook is "Alan Hite Photographics," and his blog and galleries of his work can be http://calanfound at: hite.squarespace.com. He started a former student’s project in 2016, and I was one of the former students who participated. This project is ongoing. If you are a former student of his, feel free to contact him to be included.

intrigued Eva. During high school, she was further motivated and inspired by teachers, Dianne Staples and Marcia Lewis. According to Eva, “One of the best things to happen to me was when Dianne bought a stained glass piece from me.” Eva now lives in Richmond, Virginia, where she has her studio. As long as she can remember she has painted and drawn. Over the last ten years, she committed to drawing every day. This dedication has paid off in many ways and developed her creativity in more areas. She creates stained glass pieces, mosaics and other art forms. Many of the art pieces are created using recycled materials. She also demonstrates her creativity through backyard gardening. In 2017, I had the pleasure of participating in a mosaic art workshop that she led. Her art work can be viewed at Eva Hite Art Page on Facebook or www.evahiteartpage.com. Her inventory varies from time to time, but her stained glass dragonflies are popular.

Mary Geil grew up in Caroline County and now lives in Spotsylvania. Photos by Alan Hite

Eva Hite’s last stop in her career was at the Virginia Department of Social Services. She is now retired and immersed in her creative art. She describes herself as a “muse follower, dream chaser, easy go lucky multi-media artist.” She is pictured with one of her creations that she calls Garden Man. Eva was also raised in Caroline County. Her mother was a selftaught artist who painted with oils which