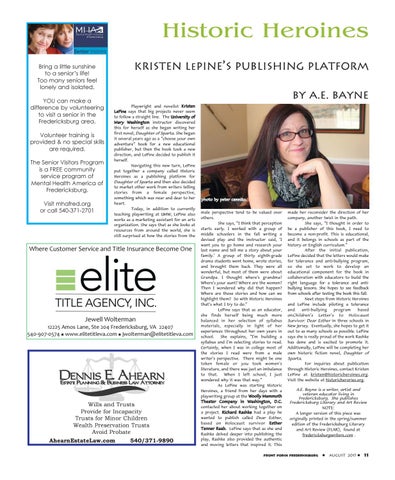 By lou gramann Riverfest is not a kid anymore. It has matured nicely into a twentysomething member of the Fredericksburg Community, with an important mission all its own. Riverfest is of course the Friends of the brainchild of Rappahannock. On September 16th, FOR will hold its 27th Annual Riverfest, and for most of those 27 years, the event has sold out. All tickets are sold in advance. Waiting until the last minute will not work. That’s why getting tickets now gives you a double advantage. You won’t miss out, and you get the early bird price which expires on September 1st.

Why is this event so popular? One reason is the gravity of the mission it represents. With 1,200 tickets sold each year, supporters understand that the FOR’s 32-year effort to protect the river is important to everyone in the area. Due to this support, the scale and impact of FOR’s programs continue to grow. Upstream of the Fredericksburg area, riparian buffers protect the flowing water from farm runoff that can include fertilizer and animal waste. Locally, highly visible River Clean-ups give many people the chance to make a difference with just a one-day commitment.

Own The Movie A 40-minute film with aerial and underwater photography that tells the story of the Rappahannock River from the Blue Ridge Mountains to the Chesapeake Bay.

Locally, too, FOR staff and volunteers offer conservation and stewardship classes and workshops for kids and teachers. Hands-on learning “At the River’s Edge” makes the sessions fun and memorable for over 6,000 students each year. Downstream in the Tappahannock area, the FOR satellite office coordinates oyster bed restoration. FOR is also committed to protecting the streams and groundwater of the watershed from the permanent pollution of fracking chemicals. “Each of these programs is important to our mission,” says Executive Director Kathleen Harrigan. “And without the funds raised at Riverfest, we just couldn’t do this important work. Riverfest is also a great party. It is at Farley Vale Farm in King George County again, under large tents, rain or shine. There will be a variety of festival foods and beverages, boat rides along the Rappahannock, a tent full of raffle prizes, and a live auction. Steamed blue crabs are a staple, as are the barbeque buffet and open bar. For the third year in a row, John Wack will cook catfish and hush puppies on-site. Wack began this tradition while serving on the FOR Executive Committee, and has added a new fryer and more volunteer assistants to keep up with demand. Wine tasting and bourbon tasting, another free part of the event, make the food taste that much better. Three different bands entertain. The Jazz Ensemble of UMW, led by music professor Doug Gately, is on stage first. Bob, Paul, and Amy follow with Riverfolk. Laurie Rose Griffith and Peter Mealy provide the pop and rock music that gets people up and dancing. Through Riverfest, Friends of the Rappahannock’s friends can keep FOR projects going strong with sponsorships ranging from $250 to $10,000. Individual tickets and sponsorships are on sale at www.riverfriends.org on the Riverfest page. The website also contains a wealth of information about FOR projects and important issues related to water quality. As the FOR mission statement says, this is a way for everyone in the area to be: “A voice and active force for a healthy and scenic Rappahannock River.”

Lou Gramann is a volunteer for Friends of the Rappahannock who has known Riverfest since it was an infant.

YOU can make a difference by volunteering to visit a senior in the Fredericksburg area. Volunteer training is provided & no special skills are required.

One of the highlights of the beekeeper’s year is the time he or she gets to collect honey from the hive. In Virginia this is usually done at the end of the heavy nectar flow, which begins in mid spring and runs till the end of June. Humans have probably been doing this for a good 10,000 years, and this year at the Downtown Greens apiary, we joined in that tradition for the first time. Bees make honey in order to preserve food stores for long periods of time. It enables a colony, which might be composed of tens of thousands of individual bees, to survive through times of dearth, when either very little is flowering in mid summer, or through the dead of winter when it is just too cold to fly. Honey is composed of nectar which is processed by enzymes and bacteria in the bee’s digestive tract, carefully dried to a precise moisture content, and then sealed over in beeswax. In this form, it will stay good for hundreds and even thousands of exploring the years. Archaeologists pyramids of Egypt found honey in pots that still hadn’t spoiled. When harvesting, the beekeeper must take care not to take so much honey that it might threaten the survival of the colony. If stores become dangerously low later, the keeper can fall back on feeding the hive artificially using a solution of regular table sugar and water, but this is added work. Most beekeepers in this area use a box and frame system called a Langstroth hive. This enables us to remove honey by the frame without disrupting the rest of the colony. The bees tend to store large excesses at the top of their hive, so the apiarist usually places a whole box of clean frames, called a “super”, on top of the colony with the dedicated purpose of collecting honey. We ended up getting one full super off our production hive this year, which amounted to about 30 pounds of

honey. According to recent government statistics, the average colony produced about 38 pounds, so we were at least in the ballpark. The vagaries of weather can have a big impact on production. Last spring during the peak nectar flow we had an extended period of cool wet weather that severely hampered the ability of foraging bees to collect nectar. Honey production was down all over, and I opted not to pull a single frame. Last week I hauled the harvest up to the American Legion Hall in King George where the group I belong to, The Gateway Beekeeping Association, had set up the club’s extraction equipment. The frames are brought out one by one, and a hot knife is drawn across the tops of the cells to peel off the wax tops. Then the frames are placed in a big electric centrifuge that has a basin beneath it to collect all the honey as it spins out. You stick your food grade plastic bucket under a spigot and walk out with your honey. Finally, the honey gets filtered once or twice to strain out the odd remaining bee antennae and then poured into the bottles and pooh bears you might see at the farmers market. Of course, the actual final step is wiping everything down two or three times, since on honey day everything gets pretty sticky, including the beekeepers. It is a beautiful product sitting in nice rows on the counter of my kitchen. Maybe though, it is only the beekeeper that knows the reality of honey, a kind of distilled essence of countless stings, sweaty summer work, winter dead outs and other setbacks and disappointments. I suppose, in that way it doesn’t really differ from most human endeavors, and at least in beekeeping, if you’re lucky, you get something sweet in the end. Dr. Mike Costa is a Family Practitioner, a beekeeper & a member of the Downtow Greens family

Bring a little sunshine to a senior’s life! Too many seniors feel lonely and isolated.

The Senior Visitors Program is a FREE community service program of Mental Health America of Fredericksburg. Visit mhafred.org or call 540-371-2701

By A.E. Bayne Playwright and novelist Kristen LePine says that big projects never seem to follow a straight line. The University of Mary Washington instructor discovered this for herself as she began writing her first novel, Daughter of Sparta. She began it several years ago as a “choose your own adventure” book for a new educational publisher, but then the book took a new direction, and LePine decided to publish it herself. Navigating this new turn, LePine put together a company called Historic Heroines as a publishing platform for Daughter of Sparta and then also decided to market other work from writers telling stories from a female perspective, something which was near and dear to her heart. Today, in addition to currently teaching playwriting at UMW, LePine also works as a marketing assistant for an arts organization. She says that as she looks at resources from around the world, she is still surprised at how the stories from the

Where Customer Service and Title Insurance Become One

photo by peter cannito. male perspective tend to be valued over others. She says, “I think that perception starts early. I worked with a group of middle schoolers in the fall writing a devised play and the instructor said, ‘I want you to go home and research your last name and tell me a story about your family.’ A group of thirty eighth-grade drama students went home, wrote stories, and brought them back. They were all wonderful, but most of them were about Grandpa. I thought where's grandma? Where's your aunt? Where are the women? Then I wondered why did that happen? Where are those stories and how can we highlight them? So with Historic Heroines that’s what I try to do.” LePine says that as an educator, she finds herself being much more balanced in her selection of syllabus materials, especially in light of her experiences throughout her own years in school. She explains, “I'm building a syllabus and I'm selecting stories to read. Certainly, when I was in college most of the stories I read were from a male writer's perspective. There might be one token female or you took women's literature, and there was just an imbalance to that. When I left school, I just wondered why it was that way.” As LePine was starting Historic Heroines, a friend from her days with a playwriting group at the Woolly Mammoth Theater Company in Washington, D.C. contacted her about working together on a project. Richard Rashke had a play he wanted to publish called Dear Esther, based on Holocaust survivor Esther Tenner Raab. LePine says that as she and Rashke delved deeper into publishing the play, Rashke also provided the authentic and moving letters that inspired it. This

made her reconsider the direction of her company, another twist in the path. She says, “I thought in order to be a publisher of this book, I need to become a non-profit. This is educational, and it belongs in schools as part of the history or English curriculum.” After the initial publication, LePine decided that the letters would make for tolerance and anti-bullying program, so she set to work to develop an educational component for the book in collaboration with educators to build the right language for a tolerance and antibullying lessons. She hopes to see feedback from schools after testing the book this fall. Next steps from Historic Heroines and LePine include piloting a tolerance and anti-bullying program based onChildren’s Letter’s to Holocaust Survivor: Dear Esther in three schools in New Jersey. Eventually, she hopes to get it out to as many schools as possible. LePine says she is really proud of the work Rashke has done and is excited to promote it. Additionally, LePine will be completing her own historic fiction novel, Daughter of Sparta. For inquiries about publication through Historic Heroines, contact Kristen LePine at kristen@historicheroines.org. Visit the website at historicherories.org. A.E. Bayne is a writer, artist and veteran educator living in Fredericksburg. She publishes Fredericksburg Literary and Art Review NOTE: A longer version of this piece was originally printed in the spring/summer edition of the Fredericksburg Literary and Art Review (FLAR), found at fredericksburgwriters.com .