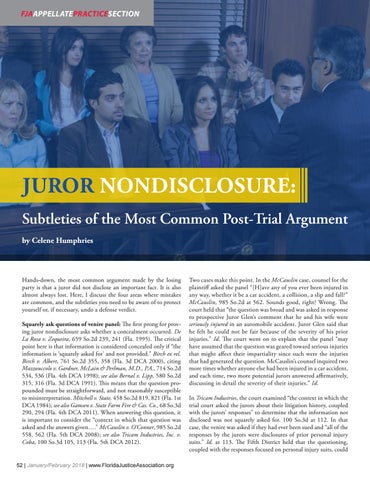 JUROR NONDISCLOSURE: Subtleties of the Most Common Post-Trial Argument by Celene Humphries

Two cases make this point. In the McCauslin case, counsel for the plaintiff asked the panel “[H]ave any of you ever been injured in any way, whether it be a car accident, a collision, a slip and fall?” McCauslin, 985 So.2d at 562. Sounds good, right? Wrong. The court held that “the question was broad and was asked in response to prospective Juror Glen’s comment that he and his wife were seriously injured in an automobile accident. Juror Glen said that he felt he could not be fair because of the severity of his prior injuries.” Id. The court went on to explain that the panel “may have assumed that the question was geared toward serious injuries that might affect their impartiality since such were the injuries that had generated the question. McCauslin’s counsel inquired two more times whether anyone else had been injured in a car accident, and each time, two more potential jurors answered affirmatively, discussing in detail the severity of their injuries.” Id. In Tricam Industries, the court examined “the context in which the trial court asked the jurors about their litigation history, coupled with the jurors’ responses” to determine that the information not disclosed was not squarely asked for. 100 So.3d at 112. In that case, the venire was asked if they had ever been sued and “all of the responses by the jurors were disclosures of prior personal injury suits.” Id. at 113. The Fifth District held that the questioning, coupled with the responses focused on personal injury suits, could 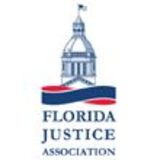