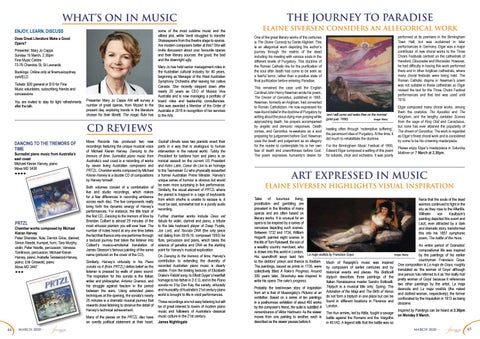 some of the most sublime music and the silliest plot, while Verdi struggled to transfer Shakespeare from the theatre stage to operas. Are modern composers better at this? She will invite discussion about your favourite operas and their literary sources: the good, the bad and the downright ugly.

Presenter Mary Jo Capps AM will survey a number of great operas, from Mozart to the present day, exploring trends in the literature chosen for their libretti. The magic flute has

Mary Jo has held senior management roles in the Australian cultural industry for 40 years, beginning as Manager of the West Australian Symphony Orchestra after leaving her native Canada. She recently stepped down after nearly 20 years as CEO of Musica Viva Australia and is now managing a portfolio of board roles and leadership consultancies. She was awarded a Member of the Order of Australia in 2019 in recognition of her services to the Arts.

Move Records has produced two new recordings featuring the unique musical voice of Michael Kieran Harvey. Dancing to the tremors of time: Surrealist piano music from Australia’s east coast is a recording of works by seven living Australian composers and PRTZL: Chamber works composed by Michael Kieran Harvey is a double CD of compositions by Harvey himself. Both volumes consist of a combination of live and studio recordings, which makes for a few differences in recording ambience across each disc. The live components really bring forth the dynamic energy of Harvey’s performances. For instance, the title track of the first CD, Dancing to the tremors of time by Brendan Colbert is almost 29 minutes of the most virtuosic pianism you will ever hear. The number of notes heard at any one time belies the fact that there is only one performer through a textural journey that takes the listener into Colbert’s musico-emotional translation of James Gleeson’s famous painting of the same name (pictured on the cover of the CD). Similarly, Harvey’s virtuosity in his Piano sonata no 4 (from PRTZL) defies belief as the listener is pressed by walls of piano sound. The inspiration for this sonata is the Italian writer and philosopher, Antonio Gramsci, and his struggle against fascism in the period between the wars. Using extended piano techniques at the opening, the sonata’s nearly 25 minutes is a dramatic musical journey that rewards close listening to observe the detail of Harvey’s technical achievement. Many of the pieces on the PRTZL disc have an overtly political statement at their heart.

Gestalt climate sees two pianists enact their parts in a way that is analogous to human intervention in the natural world. Tubby the President for baritone horn and piano is an ironical assault on the current US President and Astro Labe, Coeur de Lion is an homage to the Tasmanian DJ who physically assaulted a former Australian Prime Minister. Harvey’s unique sense of humour is obvious but would be even more surprising in live performance. Similarly, the visual element of PRTZL where the pianist is trapped in a cage of keyboards from which she/he is unable to escape is, it must be said, somewhat lost in a purely audio recording. Further chamber works include Deus est fabula for violin, clarinet and piano, a tribute to the late keyboard player of Deep Purple, Jon Lord, and Toccata DNA (the only piece not dating from 2018-19, composed 1993) for flute, percussion and piano, which takes the science of genetics and DNA as the starting point for Harvey’s musical exploration. On Dancing to the tremors of time, Harvey’s contribution to extending the diversity of recorded Australian piano music is clearly visible. From the tinkling textures of Elizabeth Drake’s Rabbit song, to Elliott Gyger’s heartfelt homage to his father in D E G, and in the Piano sonata no 9 by Don Kay, the variety, virtuosity and musicality of Australia’s 21st century piano world is brought to life in vivid performances. These recordings are not easy listening but will be of great interest to lovers of modern piano music and followers of Australia’s classical music culture in the 21st century. James Nightingale

THE JOURNEY TO PARADISE ELAINE SIVERSEN CONSIDERS AN ALLEGORICAL WORK performed at its premiere in the Birmingham Town Hall, but was acclaimed in later performances in Germany. Elgar was a major contributor of new choral works to the Three Choirs Festivals centred on the cathedrals of Hereford, Gloucester and Worcester. However, he had difficulty in having this work performed there and in other Anglican cathedrals, where many choral festivals were being held. The Roman Catholic dogma in Newman’s poem was not suitable in these cathedrals so Elgar revised the text for the Three Choirs Festival performances and that text was used until 1910.

One of the great literary works of the centuries is The Divine Comedy by Dante Alighieri. This is an allegorical work depicting the author’s journey through the realms of the dead including his meeting with various souls in the different levels of Purgatory. This doctrine of the Roman Catholic rite for the purification of the soul after death had come to be seen as a fearful terror, rather than a positive state of final purification before entering Paradise. This remained the case until the English Cardinal John Henry Newman wrote his poem, The Dream of Gerontius, published in 1865. Newman, formerly an Anglican, had converted to Roman Catholicism. He now expressed his new-found belief in the doctrine of Purgatory by writing about the pious dying man praying while approaching death, his prayers accompanied by angelic and demonic responses. Death comes, and Gerontius re-awakens as a soul preparing for judgement before God. Newman uses the death and judgement as an allegory for the reader to contemplate his or her own fear of death and unworthiness before God. The poem expresses humanity’s desire for

healing often through ‘redemptive suffering’, the paramount idea of Purgatory. At the time, it did much to rehabilitate the doctrine. For the Birmingham Music Festival of 1900, Edward Elgar composed a setting of this poem for soloists, choir and orchestra. It was poorly

Elgar composed many choral works, among them the oratorios The Apostles and The Kingdom, and the lengthy cantatas Scenes from the saga of King Olaf and Caractacus, but none has ever attained the popularity of The dream of Gerontius. The work is regarded as Elgar’s finest choral work and is considered by some to be his crowning masterpiece. Please enjoy Elgar’s masterpiece in Saturday Matinee on 7 March at 2.30pm.

ART EXPRESSED IN MUSIC ELAINE SIVERSEN HIGHLIGHTS VISUAL INSPIRATION Tales of luxurious living, fierce that the souls of the dead prostitution and gambling are warriors continued to fight in the prevalent in the librettos of many sky as they rose to the Afterlife. operas and are often based on Wilhelm von Kaulbach’s literary works. It is unusual for an painting depicted this event and opera to be inspired by a series of Liszt, ever attracted by a dark canvases depicting such scenes. and dramatic story, transformed Between 1732 and 1734, William this into his 1857 symphonic Hogarth painted eight scenes in poem, The battle of the Huns. the life of Tom Rakewell, the son of An entire period of Granados’ a wealthy country merchant, who compositional life was inspired is drawn into this world in London. La maja vestida by Francisco Goya Image: Alamy by the paintings of his earlier His spendthrift ways lead him countryman Francisco Goya. to the debtors’ prison and thence to Bedlam. Much of Respighi’s music was inspired One composition is La maja de Goya, roughly The paintings, issued as prints in 1735, were by composers of earlier centuries and by translated as ‘the woman of Goya’ although collectively titled A Rake’s Progress. Around historical events and places. His Botticelli one person has referred to it as ‘the really hot/ 300 years later, Stravinsky was inspired to triptych describes three paintings of the pretty woman of Goya’ because it references write his opera The rake’s progress. Italian Renaissance master Sandro Botticelli. two other paintings by the artist, La maja Probably the best-known story of inspiration Triptych is a musical title only: Spring, The desnuda and La maja vestida (the naked from art is that of Mussorgsky’s Pictures at an Adoration of the Magi and The Birth of Venus and clothed woman, respectively), the former exhibition. Based on a series of ten paintings do not form a triptych in one place but can be confiscated by the Inquisition in 1813 as being in a posthumous exhibition of about 400 works found in different locations in Florence and obscene. by the composer’s friend, the suite is subtitled A London. remembrance of Viktor Hartmann. As the viewer The Hun armies, led by Attila, fought a savage Inspired by Paintings can be heard at 2.30pm moves from one painting to another, each is battle against the Romans and the Visigoths on Monday 9 March. described as the viewer pauses before it. in 451AD. A legend tells that the battle was so MARCH 2020 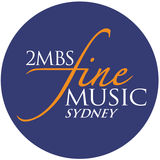