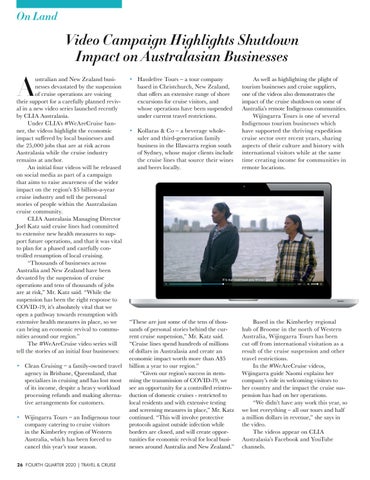 ustralian and New Zealand businesses devastated by the suspension of cruise operations are voicing their support for a carefully planned revival in a new video series launched recently by CLIA Australasia. Under CLIA’s #WeAreCruise banner, the videos highlight the economic impact suffered by local businesses and the 25,000 jobs that are at risk across Australasia while the cruise industry remains at anchor. An initial four videos will be released on social media as part of a campaign that aims to raise awareness of the wider impact on the region’s $5 billion-a-year cruise industry and tell the personal stories of people within the Australasian cruise community. CLIA Australasia Managing Director Joel Katz said cruise lines had committed to extensive new health measures to support future operations, and that it was vital to plan for a phased and carefully controlled resumption of local cruising. “Thousands of businesses across Australia and New Zealand have been devasted by the suspension of cruise operations and tens of thousands of jobs are at risk,” Mr. Katz said. “While the suspension has been the right response to COVID-19, it’s absolutely vital that we open a pathway towards resumption with extensive health measures in place, so we can bring an economic revival to communities around our region.” The #WeAreCruise video series will tell the stories of an initial four businesses: • Clean Cruising – a family-owned travel

agency in Brisbane, Queensland, that specializes in cruising and has lost most of its income, despite a heavy workload processing refunds and making alternative arrangements for customers.

company catering to cruise visitors in the Kimberley region of Western Australia, which has been forced to cancel this year’s tour season.

saler and third-generation family business in the Illawarra region south of Sydney, whose major clients include the cruise lines that source their wines and beers locally.

As well as highlighting the plight of tourism businesses and cruise suppliers, one of the videos also demonstrates the impact of the cruise shutdown on some of Australia’s remote Indigenous communities. Wijingarra Tours is one of several Indigenous tourism businesses which have supported the thriving expedition cruise sector over recent years, sharing aspects of their culture and history with international visitors while at the same time creating income for communities in remote locations.

“These are just some of the tens of thousands of personal stories behind the current cruise suspension,” Mr. Katz said. “Cruise lines spend hundreds of millions of dollars in Australasia and create an economic impact worth more than A$5 billion a year to our region.” “Given our region’s success in stemming the transmission of COVID-19, we see an opportunity for a controlled reintroduction of domestic cruises - restricted to local residents and with extensive testing and screening measures in place,” Mr. Katz continued. “This will involve protective protocols against outside infection while borders are closed, and will create opportunities for economic revival for local businesses around Australia and New Zealand.”

Based in the Kimberley regional hub of Broome in the north of Western Australia, Wijingarra Tours has been cut off from international visitation as a result of the cruise suspension and other travel restrictions. In the #WeAreCruise videos, Wijingarra guide Naomi explains her company’s role in welcoming visitors to her country and the impact the cruise suspension has had on her operations. “We didn’t have any work this year, so we lost everything – all our tours and half a million dollars in revenue,” she says in the video. The videos appear on CLIA Australasia’s Facebook and YouTube channels.

based in Christchurch, New Zealand, that offers an extensive range of shore excursions for cruise visitors, and whose operations have been suspended under current travel restrictions.