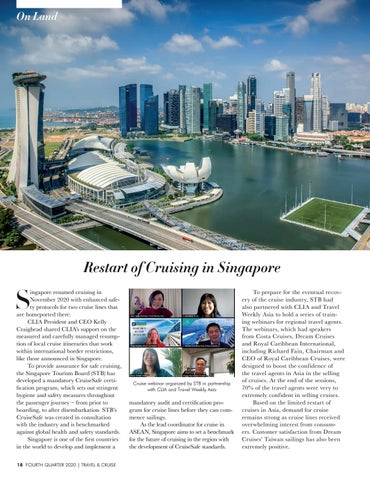 Restart of Cruising in Singapore

ingapore resumed cruising in November 2020 with enhanced safety protocols for two cruise lines that are homeported there. CLIA President and CEO Kelly Craighead shared CLIA’s support on the measured and carefully managed resumption of local cruise itineraries that work within international border restrictions, like those announced in Singapore. To provide assurance for safe cruising, the Singapore Tourism Board (STB) has developed a mandatory CruiseSafe certification program, which sets out stringent hygiene and safety measures throughout the passenger journey – from prior to boarding, to after disembarkation. STB’s CruiseSafe was created in consultation with the industry and is benchmarked against global health and safety standards. Singapore is one of the first countries in the world to develop and implement a 18 FOURTH QUARTER 2020 | TRAVEL & CRUISE

mandatory audit and certification program for cruise lines before they can commence sailings. As the lead coordinator for cruise in ASEAN, Singapore aims to set a benchmark for the future of cruising in the region with the development of CruiseSafe standards.

To prepare for the eventual recovery of the cruise industry, STB had also partnered with CLIA and Travel Weekly Asia to hold a series of training webinars for regional travel agents. The webinars, which had speakers from Costa Cruises, Dream Cruises and Royal Caribbean International, including Richard Fain, Chairman and CEO of Royal Caribbean Cruises, were designed to boost the confidence of the travel agents in Asia in the selling of cruises. At the end of the sessions, 70% of the travel agents were very to extremely confident in selling cruises. Based on the limited restart of cruises in Asia, demand for cruise remains strong as cruise lines received overwhelming interest from consumers. Customer satisfaction from Dream Cruises’ Taiwan sailings has also been extremely positive.