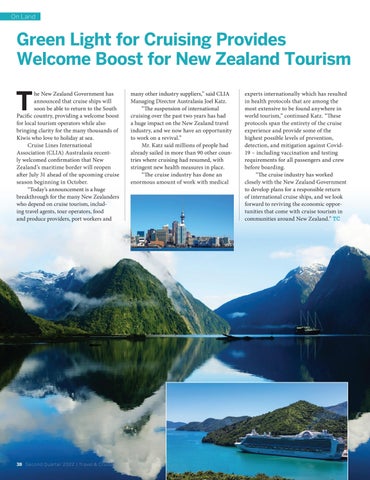 he New Zealand Government has announced that cruise ships will soon be able to return to the South Pacific country, providing a welcome boost for local tourism operators while also bringing clarity for the many thousands of Kiwis who love to holiday at sea. Cruise Lines International Association (CLIA) Australasia recently welcomed confirmation that New Zealand’s maritime border will reopen after July 31 ahead of the upcoming cruise season beginning in October. “Today’s announcement is a huge breakthrough for the many New Zealanders who depend on cruise tourism, including travel agents, tour operators, food and produce providers, port workers and

many other industry suppliers,” said CLIA Managing Director Australasia Joel Katz. “The suspension of international cruising over the past two years has had a huge impact on the New Zealand travel industry, and we now have an opportunity to work on a revival.” Mr. Katz said millions of people had already sailed in more than 90 other countries where cruising had resumed, with stringent new health measures in place. “The cruise industry has done an enormous amount of work with medical

experts internationally which has resulted in health protocols that are among the most extensive to be found anywhere in world tourism,” continued Katz. “These protocols span the entirety of the cruise experience and provide some of the highest possible levels of prevention, detection, and mitigation against Covid19 – including vaccination and testing requirements for all passengers and crew before boarding. “The cruise industry has worked closely with the New Zealand Government to develop plans for a responsible return of international cruise ships, and we look forward to reviving the economic opportunities that come with cruise tourism in communities around New Zealand.”