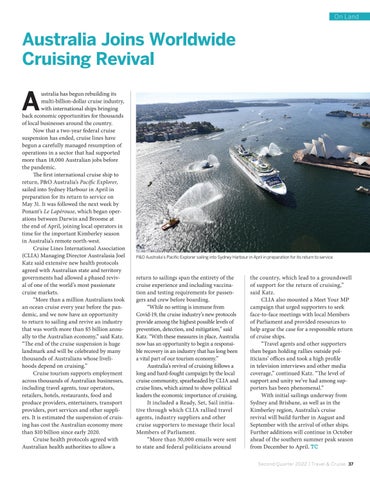 ustralia has begun rebuilding its multi-billion-dollar cruise industry, with international ships bringing back economic opportunities for thousands of local businesses around the country. Now that a two-year federal cruise suspension has ended, cruise lines have begun a carefully managed resumption of operations in a sector that had supported more than 18,000 Australian jobs before the pandemic. The first international cruise ship to return, P&amp;O Australia’s Pacific Explorer, sailed into Sydney Harbour in April in preparation for its return to service on May 31. It was followed the next week by Ponant’s Le Lapérouse, which began operations between Darwin and Broome at the end of April, joining local operators in time for the important Kimberley season in Australia’s remote north-west. Cruise Lines International Association (CLIA) Managing Director Australasia Joel Katz said extensive new health protocols agreed with Australian state and territory governments had allowed a phased revival of one of the world’s most passionate cruise markets. “More than a million Australians took an ocean cruise every year before the pandemic, and we now have an opportunity to return to sailing and revive an industry that was worth more than $5 billion annually to the Australian economy,” said Katz. “The end of the cruise suspension is huge landmark and will be celebrated by many thousands of Australians whose livelihoods depend on cruising.” Cruise tourism supports employment across thousands of Australian businesses, including travel agents, tour operators, retailers, hotels, restaurants, food and produce providers, entertainers, transport providers, port services and other suppliers. It is estimated the suspension of cruising has cost the Australian economy more than $10 billion since early 2020. Cruise health protocols agreed with Australian health authorities to allow a

P&amp;O Australia’s Pacific Explorer sailing into Sydney Harbour in April in preparation for its return to service

return to sailings span the entirety of the cruise experience and including vaccination and testing requirements for passengers and crew before boarding. “While no setting is immune from Covid-19, the cruise industry’s new protocols provide among the highest possible levels of prevention, detection, and mitigation,” said Katz. “With these measures in place, Australia now has an opportunity to begin a responsible recovery in an industry that has long been a vital part of our tourism economy.” Australia’s revival of cruising follows a long and hard-fought campaign by the local cruise community, spearheaded by CLIA and cruise lines, which aimed to show political leaders the economic importance of cruising. It included a Ready, Set, Sail initiative through which CLIA rallied travel agents, industry suppliers and other cruise supporters to message their local Members of Parliament. “More than 30,000 emails were sent to state and federal politicians around

the country, which lead to a groundswell of support for the return of cruising,” said Katz. CLIA also mounted a Meet Your MP campaign that urged supporters to seek face-to-face meetings with local Members of Parliament and provided resources to help argue the case for a responsible return of cruise ships. “Travel agents and other supporters then began holding rallies outside politicians’ offices and took a high profile in television interviews and other media coverage,” continued Katz. “The level of support and unity we’ve had among supporters has been phenomenal.” With initial sailings underway from Sydney and Brisbane, as well as in the Kimberley region, Australia’s cruise revival will build further in August and September with the arrival of other ships. Further additions will continue in October ahead of the southern summer peak season from December to April. Secon d Q ua r ter 202 2 | Travel &amp; Cr uise 37