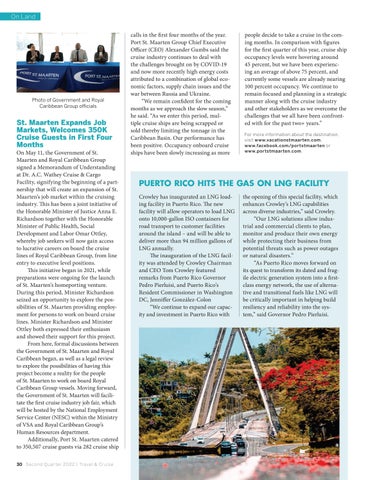 St. Maarten Expands Job Markets, Welcomes 350K Cruise Guests in First Four Months On May 11, the Government of St. Maarten and Royal Caribbean Group signed a Memorandum of Understanding at Dr. A.C. Wathey Cruise &amp; Cargo Facility, signifying the beginning of a partnership that will create an expansion of St. Maarten’s job market within the cruising industry. This has been a joint initiative of the Honorable Minister of Justice Anna E. Richardson together with the Honorable Minister of Public Health, Social Development and Labor Omar Ottley, whereby job seekers will now gain access to lucrative careers on board the cruise lines of Royal Caribbean Group, from line entry to executive level positions. This initiative began in 2021, while preparations were ongoing for the launch of St. Maarten’s homeporting venture. During this period, Minister Richardson seized an opportunity to explore the possibilities of St. Maarten providing employment for persons to work on board cruise lines. Minister Richardson and Minister Ottley both expressed their enthusiasm and showed their support for this project. From here, formal discussions between the Government of St. Maarten and Royal Caribbean began, as well as a legal review to explore the possibilities of having this project become a reality for the people of St. Maarten to work on board Royal Caribbean Group vessels. Moving forward, the Government of St. Maarten will facilitate the first cruise industry job fair, which will be hosted by the National Employment Service Center (NESC) within the Ministry of VSA and Royal Caribbean Group’s Human Resources department. Additionally, Port St. Maarten catered to 350,507 cruise guests via 282 cruise ship 30 S e co n d Q ua r te r 202 2 | Travel &amp; Cr uise

calls in the first four months of the year. Port St. Maarten Group Chief Executive Officer (CEO) Alexander Gumbs said the cruise industry continues to deal with the challenges brought on by COVID-19 and now more recently high energy costs attributed to a combination of global economic factors, supply chain issues and the war between Russia and Ukraine. “We remain confident for the coming months as we approach the slow season,” he said. “As we enter this period, multiple cruise ships are being scrapped or sold thereby limiting the tonnage in the Caribbean Basin. Our performance has been positive. Occupancy onboard cruise ships have been slowly increasing as more

people decide to take a cruise in the coming months. In comparison with figures for the first quarter of this year, cruise ship occupancy levels were hovering around 45 percent, but we have been experiencing an average of above 75 percent, and currently some vessels are already nearing 100 percent occupancy. We continue to remain focused and planning in a strategic manner along with the cruise industry and other stakeholders as we overcome the challenges that we all have been confronted with for the past two+ years.” For more information about the destination, visit www.vacationstmaarten.com, www.facebook.com/portstmaarten or www.portstmaarten.com.

PUERTO RICO HITS THE GAS ON LNG FACILITY Crowley has inaugurated an LNG loading facility in Puerto Rico. The new facility will allow operators to load LNG onto 10,000-gallon ISO containers for road transport to customer facilities around the island – and will be able to deliver more than 94 million gallons of LNG annually. The inauguration of the LNG facility was attended by Crowley Chairman and CEO Tom Crowley featured remarks from Puerto Rico Governor Pedro Pierluisi, and Puerto Rico’s Resident Commissioner in Washington DC, Jenniffer González-Colon “We continue to expand our capacity and investment in Puerto Rico with

the opening of this special facility, which enhances Crowley’s LNG capabilities across diverse industries,” said Crowley. “Our LNG solutions allow industrial and commercial clients to plan, monitor and produce their own energy while protecting their business from potential threats such as power outages or natural disasters.” “As Puerto Rico moves forward on its quest to transform its dated and fragile electric generation system into a firstclass energy network, the use of alternative and transitional fuels like LNG will be critically important in helping build resiliency and reliability into the system,” said Governor Pedro Pierluisi.