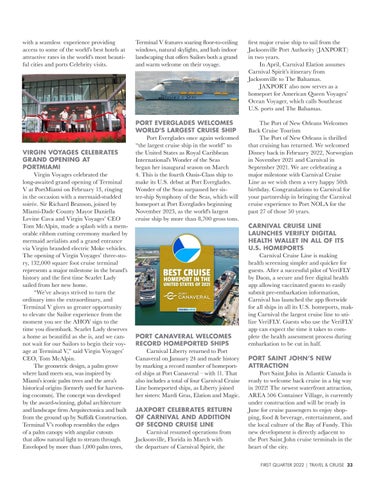 with a seamless experience providing access to some of the world’s best hotels at attractive rates in the world’s most beautiful cities and ports Celebrity visits.

VIRGIN VOYAGES CELEBRATES GRAND OPENING AT PORTMIAMI Virgin Voyages celebrated the long-awaited grand opening of Terminal V at PortMiami on February 13, ringing in the occasion with a mermaid-studded soirée. Sir Richard Branson, joined by Miami-Dade County Mayor Daniella Levine Cava and Virgin Voyages’ CEO Tom McAlpin, made a splash with a memorable ribbon cutting ceremony marked by mermaid aerialists and a grand entrance via Virgin branded electric Moke vehicles. The opening of Virgin Voyages’ three-story, 132,000 square foot cruise terminal represents a major milestone in the brand’s history and the first time Scarlet Lady sailed from her new home. “We’ve always strived to turn the ordinary into the extraordinary, and Terminal V gives us greater opportunity to elevate the Sailor experience from the moment you see the AHOY sign to the time you disembark. Scarlet Lady deserves a home as beautiful as she is, and we cannot wait for our Sailors to begin their voyage at Terminal V,” said Virgin Voyages’ CEO, Tom McAlpin. The geometric design, a palm grove where land meets sea, was inspired by Miami’s iconic palm trees and the area’s historical origins (formerly used for harvesting coconuts). The concept was developed by the award-winning, global architecture and landscape firm Arquitectonica and built from the ground up by Suffolk Construction. Terminal V’s rooftop resembles the edges of a palm canopy with angular cutouts that allow natural light to stream through. Enveloped by more than 1,000 palm trees,

PORT EVERGLADES WELCOMES WORLD&#39;S LARGEST CRUISE SHIP Port Everglades once again welcomed “the largest cruise ship in the world” to the United States as Royal Caribbean International&#39;s Wonder of the Seas began her inaugural season on March 4. This is the fourth Oasis-Class ship to make its U.S. debut at Port Everglades. Wonder of the Seas surpassed her sister-ship Symphony of the Seas, which will homeport at Port Everglades beginning November 2023, as the world&#39;s largest cruise ship by more than 8,700 gross tons.

The Port of New Orleans Welcomes Back Cruise Tourism The Port of New Orleans is thrilled that cruising has returned. We welcomed Disney back in February 2022, Norwegian in November 2021 and Carnival in September 2021. We are celebrating a major milestone with Carnival Cruise Line as we wish them a very happy 50th birthday. Congratulations to Carnival for your partnership in bringing the Carnival cruise experience to Port NOLA for the past 27 of those 50 years.

PORT CANAVERAL WELCOMES RECORD HOMEPORTED SHIPS Carnival Liberty returned to Port Canaveral on January 24 and made history by marking a record number of homeported ships at Port Canaveral – with 11. That also includes a total of four Carnival Cruise Line homeported ships, as Liberty joined her sisters: Mardi Gras, Elation and Magic. JAXPORT CELEBRATES RETURN OF CARNIVAL AND ADDITION OF SECOND CRUISE LINE Carnival resumed operations from Jacksonville, Florida in March with the departure of Carnival Spirit, the

CARNIVAL CRUISE LINE LAUNCHES VERIFLY DIGITAL HEALTH WALLET IN ALL OF ITS U.S. HOMEPORTS Carnival Cruise Line is making health screening simpler and quicker for guests. After a successful pilot of VeriFLY by Daon, a secure and free digital health app allowing vaccinated guests to easily submit pre-embarkation information, Carnival has launched the app fleetwide for all ships in all its U.S. homeports, making Carnival the largest cruise line to utilize VeriFLY. Guests who use the VeriFLY app can expect the time it takes to complete the health assessment process during embarkation to be cut in half. PORT SAINT JOHN’S NEW ATTRACTION Port Saint John in Atlantic Canada is ready to welcome back cruise in a big way in 2022! The newest waterfront attraction, AREA 506 Container Village, is currently under construction and will be ready in June for cruise passengers to enjoy shopping, food &amp; beverage, entertainment, and the local culture of the Bay of Fundy. This new development is directly adjacent to the Port Saint John cruise terminals in the heart of the city. FIRST QUARTER 2022 | TRAVEL &amp; CRUISE 33