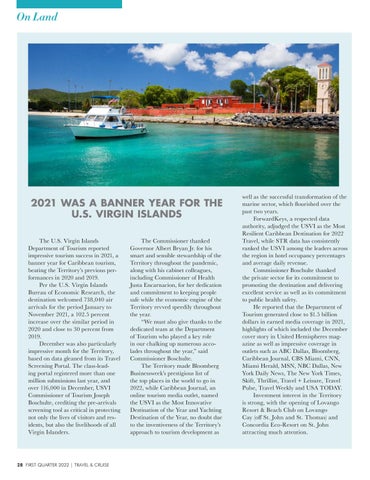 2021 WAS A BANNER YEAR FOR THE U.S. VIRGIN ISLANDS The U.S. Virgin Islands Department of Tourism reported impressive tourism success in 2021, a banner year for Caribbean tourism, beating the Territory’s previous performances in 2020 and 2019. Per the U.S. Virgin Islands Bureau of Economic Research, the destination welcomed 738,040 air arrivals for the period January to November 2021, a 102.5 percent increase over the similar period in 2020 and close to 30 percent from 2019. December was also particularly impressive month for the Territory, based on data gleaned from its Travel Screening Portal. The class-leading portal registered more than one million submissions last year, and over 116,000 in December, USVI Commissioner of Tourism Joseph Boschulte, crediting the pre-arrivals screening tool as critical in protecting not only the lives of visitors and residents, but also the livelihoods of all Virgin Islanders.

The Commissioner thanked Governor Albert Bryan Jr. for his smart and sensible stewardship of the Territory throughout the pandemic, along with his cabinet colleagues, including Commissioner of Health Justa Encarnacion, for her dedication and commitment to keeping people safe while the economic engine of the Territory revved speedily throughout the year. “We must also give thanks to the dedicated team at the Department of Tourism who played a key role in our chalking up numerous accolades throughout the year,” said Commissioner Boschulte. The Territory made Bloomberg Businessweek’s prestigious list of the top places in the world to go in 2022, while Caribbean Journal, an online tourism media outlet, named the USVI as the Most Innovative Destination of the Year and Yachting Destination of the Year, no doubt due to the inventiveness of the Territory’s approach to tourism development as

well as the successful transformation of the marine sector, which flourished over the past two years. ForwardKeys, a respected data authority, adjudged the USVI as the Most Resilient Caribbean Destination for 2022 Travel, while STR data has consistently ranked the USVI among the leaders across the region in hotel occupancy percentages and average daily revenue. Commissioner Boschulte thanked the private sector for its commitment to promoting the destination and delivering excellent service as well as its commitment to public health safety. He reported that the Department of Tourism generated close to $1.5 billion dollars in earned media coverage in 2021, highlights of which included the December cover story in United Hemispheres magazine as well as impressive coverage in outlets such as ABC Dallas, Bloomberg, Caribbean Journal, CBS Miami, CNN, Miami Herald, MSN, NBC Dallas, New York Daily News, The New York Times, Skift, Thrillist, Travel + Leisure, Travel Pulse, Travel Weekly and USA TODAY. Investment interest in the Territory is strong, with the opening of Lovango Resort &amp; Beach Club on Lovango Cay (off St. John and St. Thomas) and Concordia Eco-Resort on St. John attracting much attention.