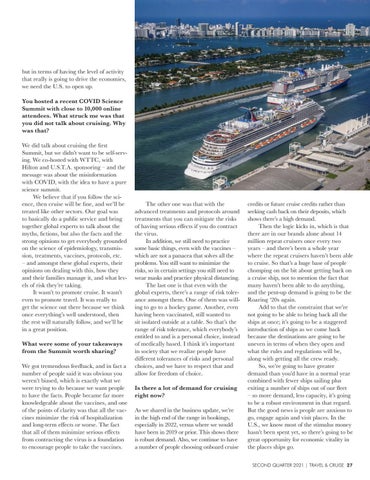 but in terms of having the level of activity that really is going to drive the economies, we need the U.S. to open up. You hosted a recent COVID Science Summit with close to 10,000 online attendees. What struck me was that you did not talk about cruising. Why was that? We did talk about cruising the first Summit, but we didn’t want to be self-serving. We co-hosted with WTTC, with Hilton and U.S.T.A. sponsoring – and the message was about the misinformation with COVID, with the idea to have a pure science summit. We believe that if you follow the science, then cruise will be fine, and we’ll be treated like other sectors. Our goal was to basically do a public service and bring together global experts to talk about the myths, fictions, but also the facts and the strong opinions to get everybody grounded on the science of epidemiology, transmission, treatments, vaccines, protocols, etc. – and amongst these global experts, their opinions on dealing with this, how they and their families manage it, and what levels of risk they’re taking. It wasn’t to promote cruise. It wasn’t even to promote travel. It was really to get the science out there because we think once everything’s well understood, then the rest will naturally follow, and we’ll be in a great position. What were some of your takeaways from the Summit worth sharing? We got tremendous feedback, and in fact a number of people said it was obvious you weren’t biased, which is exactly what we were trying to do because we want people to have the facts. People became far more knowledgeable about the vaccines, and one of the points of clarity was that all the vaccines minimize the risk of hospitalization and long-term effects or worse. The fact that all of them minimize serious effects from contracting the virus is a foundation to encourage people to take the vaccines.

The other one was that with the advanced treatments and protocols around treatments that you can mitigate the risks of having serious effects if you do contract the virus. In addition, we still need to practice some basic things, even with the vaccines – which are not a panacea that solves all the problems. You still want to minimize the risks, so in certain settings you still need to wear masks and practice physical distancing. The last one is that even with the global experts, there’s a range of risk tolerance amongst them. One of them was willing to go to a hockey game. Another, even having been vaccinated, still wanted to sit isolated outside at a table. So that’s the range of risk tolerance, which everybody’s entitled to and is a personal choice, instead of medically based. I think it’s important in society that we realize people have different tolerances of risks and personal choices, and we have to respect that and allow for freedom of choice. Is there a lot of demand for cruising right now? As we shared in the business update, we’re in the high end of the range in bookings, especially in 2022, versus where we would have been in 2019 or prior. This shows there is robust demand. Also, we continue to have a number of people choosing onboard cruise

credits or future cruise credits rather than seeking cash back on their deposits, which shows there’s a high demand. Then the logic kicks in, which is that there are in our brands alone about 14 million repeat cruisers once every two years – and there’s been a whole year where the repeat cruisers haven’t been able to cruise. So that’s a huge base of people chomping on the bit about getting back on a cruise ship, not to mention the fact that many haven’t been able to do anything, and the pent-up demand is going to be the Roaring ‘20s again. Add to that the constraint that we’re not going to be able to bring back all the ships at once; it’s going to be a staggered introduction of ships as we come back because the destinations are going to be uneven in terms of when they open and what the rules and regulations will be, along with getting all the crew ready. So, we’re going to have greater demand than you’d have in a normal year combined with fewer ships sailing plus exiting a number of ships out of our fleet – so more demand, less capacity, it’s going to be a robust environment in that regard. But the good news is people are anxious to go, engage again and visit places. In the U.S., we know most of the stimulus money hasn’t been spent yet, so there’s going to be great opportunity for economic vitality in the places ships go. SECOND QUARTER 2021 | TRAVEL & CRUISE 27