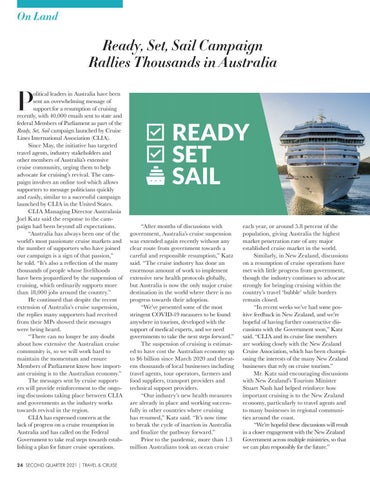 olitical leaders in Australia have been sent an overwhelming message of support for a resumption of cruising recently, with 40,000 emails sent to state and federal Members of Parliament as part of the Ready, Set, Sail campaign launched by Cruise Lines International Association (CLIA). Since May, the initiative has targeted travel agents, industry stakeholders and other members of Australia’s extensive cruise community, urging them to help advocate for cruising’s revival. The campaign involves an online tool which allows supporters to message politicians quickly and easily, similar to a successful campaign launched by CLIA in the United States. CLIA Managing Director Australasia Joel Katz said the response to the campaign had been beyond all expectations. “Australia has always been one of the world’s most passionate cruise markets and the number of supporters who have joined our campaign is a sign of that passion,” he told. “It’s also a reflection of the many thousands of people whose livelihoods have been jeopardized by the suspension of cruising, which ordinarily supports more than 18,000 jobs around the country.” He continued that despite the recent extension of Australia’s cruise suspension, the replies many supporters had received from their MPs showed their messages were being heard. “There can no longer be any doubt about how extensive the Australian cruise community is, so we will work hard to maintain the momentum and ensure Members of Parliament know how important cruising is to the Australian economy.” The messages sent by cruise supporters will provide reinforcement to the ongoing discussions taking place between CLIA and governments as the industry works towards revival in the region. CLIA has expressed concern at the lack of progress on a cruise resumption in Australia and has called on the Federal Government to take real steps towards establishing a plan for future cruise operations. 24 SECOND QUARTER 2021 | TRAVEL & CRUISE

“After months of discussions with government, Australia’s cruise suspension was extended again recently without any clear route from government towards a careful and responsible resumption,” Katz said. “The cruise industry has done an enormous amount of work to implement extensive new health protocols globally, but Australia is now the only major cruise destination in the world where there is no progress towards their adoption. “We’ve presented some of the most stringent COVID-19 measures to be found anywhere in tourism, developed with the support of medical experts, and we need governments to take the next steps forward.” The suspension of cruising is estimated to have cost the Australian economy up to $6 billion since March 2020 and threatens thousands of local businesses including travel agents, tour operators, farmers and food suppliers, transport providers and technical support providers. “Our industry’s new health measures are already in place and working successfully in other countries where cruising has resumed,” Katz said. “It’s now time to break the cycle of inaction in Australia and finalize the pathway forward.” Prior to the pandemic, more than 1.3 million Australians took an ocean cruise

each year, or around 5.8 percent of the population, giving Australia the highest market penetration rate of any major established cruise market in the world. Similarly, in New Zealand, discussions on a resumption of cruise operations have met with little progress from government, though the industry continues to advocate strongly for bringing cruising within the country’s travel ‘bubble’ while borders remain closed. “In recent weeks we’ve had some positive feedback in New Zealand, and we’re hopeful of having further constructive discussions with the Government soon,” Katz said. “CLIA and its cruise line members are working closely with the New Zealand Cruise Association, which has been championing the interests of the many New Zealand businesses that rely on cruise tourism.” Mr. Katz said encouraging discussions with New Zealand’s Tourism Minister Stuart Nash had helped reinforce how important cruising is to the New Zealand economy, particularly to travel agents and to many businesses in regional communities around the coast. “We’re hopeful these discussions will result in a closer engagement with the New Zealand Government across multiple ministries, so that we can plan responsibly for the future.”